A government ban on single-use plastics deals with a scourge in Thailand, but a pilot project in Rayong also shows promise

Plastic is omnipresent in Thailand. It's found everywhere, from luxury shopping malls to 7-Eleven convenience stores, on almost every street corner and beneath the skin of some individuals. It's even inside the stomachs of much marine life.

The unprecedented death rate of dugongs and microplastics found in mackerel have sparked alarm among happy-go-lucky Thais, with the government finally issuing an ultimatum to end single-use plastic by 2022.

At the start of 2022, a ban on styrofoam food packages and single-use plastic items, including lightweight plastic bags, straws and cups, will come into effect.

The ban is part of the government's roadmap on plastic waste management for 2018-30. Apart from a ban on plastic food packages by 2022, the master plan sets a goal to have all plastic materials and waste in Thailand recycled by 2030.

While hopes for humanity may be restored, it remains to be seen whether such a move is a knee-jerk reaction to alleviate concerns over careless plastic use or a sensible, sustainable attempt to help the ecosystem. 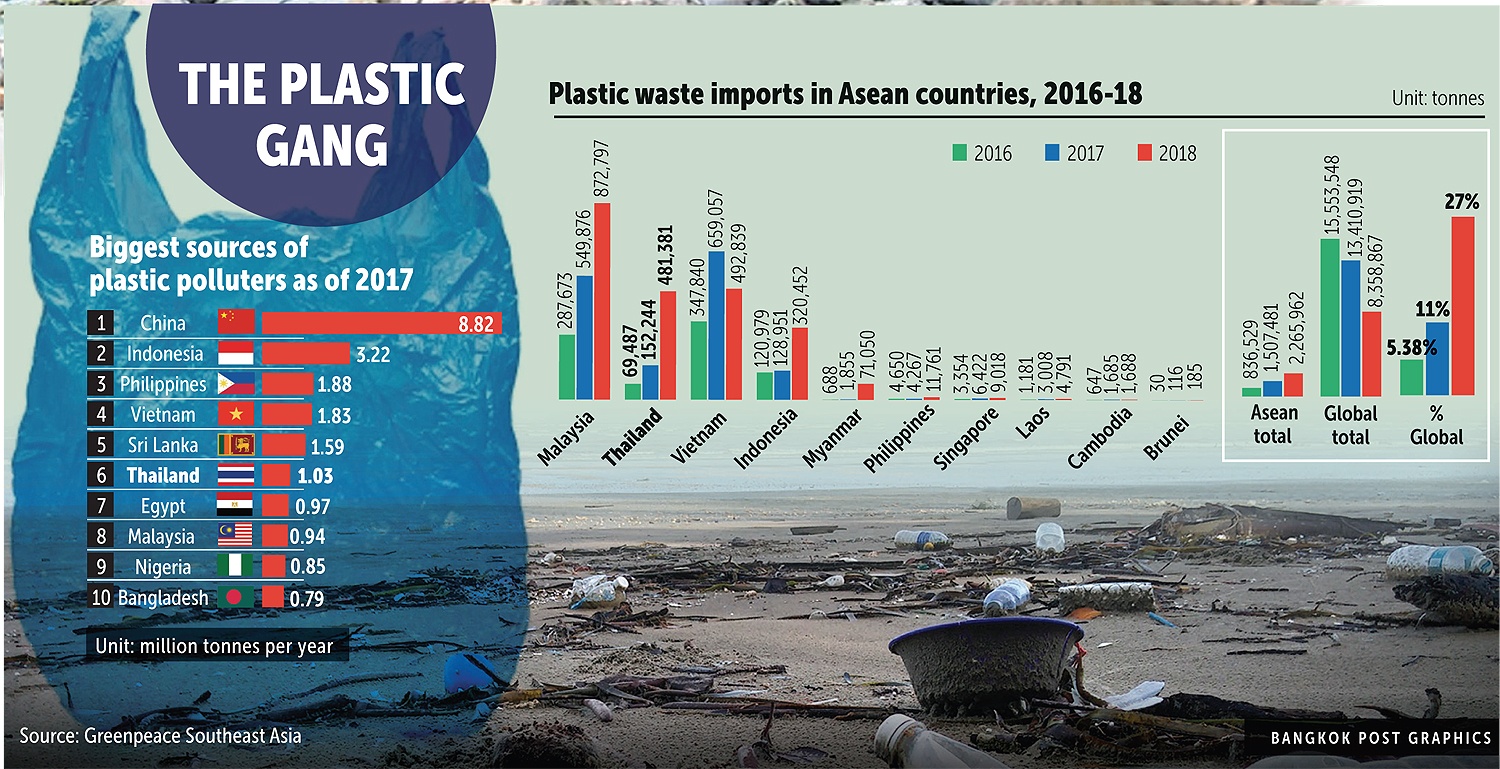 It's estimated that Thais use 45 billion single-use plastic bags a year. Of this number, 13.5 billion -- about 30% -- are from department stores and convenience stores.

A further 30% of plastic waste comes from mom-and-pop shops, with the rest from street vendors and traditional wet markets.

Incentives offered by supermarkets, awarding extra shopping points for customers, seem to be inadequate in addressing the issue, according to the Thailand Development Research Institute (TDRI).

Thailand should adopt a carrot-and-stick approach in tackling heavy plastic use, the TDRI said.

The stick aspect should be emphasised because Thais tend to lack the willingness for long-term commitment, the think tank said.

Banning or imposing mandatory payment for using plastic bags and styrofoam is needed for the country's environmental sustainability, the TDRI said.

The carrot portion could include promotional campaigns to use water bottles and waste separation.

There is no guarantee that the government's roadmap on plastic waste management will bring about change and the vision of a circular economy, said Tara Buakamsri, Thailand country director for Greenpeace Southeast Asia.

"Unless legally binding mechanisms are implemented to reduce the impact of single-use plastic products on the environment, the roadmap mostly raises public awareness and supports voluntary measures, but without significant progress," Mr Tara said.

The roadmap is poised to create shockwaves in the industrial sector, especially for those involved in upstream to downstream production of plastic products.

Somsak Borrisuttanakul, chief executive of TPBI Plc, a maker and trader of plastic film, said the company is keen on complying with the ban on single-use plastics because it revamped its business operations over the past three years.

"TPBI projects purchase orders will significantly drop over the next few years, so we expanded our customer base to cover both domestic and overseas, and shifted production from shopping bags to rubbish bags," Mr Somsak said.

"This move will improve the company's plastic production to attract new customers and maintain the base of existing buyers," Mr Somsak said. "It is in line with our business transformation plan because single-use plastic bags have been banned in many countries. But for garbage bags, TPBI has received massive orders from overseas customers since the second quarter of 2019."

Mr Somsak said single-use plastic bags accounted for 20% of TPBI's sales in the first half, compared with 60% four years ago.

The ban on single-use plastic items in 2022 will have an outsized effect on food and drink vendors and hawkers, as well as grocery stores and fresh market vendors selling vegetables, fruit and meat.

"Before imposing a mandatory ban on plastic bags, the government should encourage Thais to change their behaviour, especially sorting waste because many Thais still discard all rubbish into one bin," Mr Somsak said.

"We will exit the [production] of single-use plastic polymers in five years," Mr Patiphan said. "At present, production capacity of this raw material stands at 150,000 tonnes per year."

PLA is a biodegradable plastic, used as a raw material for plates, bowls and cups. There is another raw material -- polybutylene succinate -- used for making plastic bags and films.

In addition, PTTGC has teamed up with Alpla Packaging, an Austrian recycling company, to build a recycling plant for plastic waste in Rayong with an initial budget of 1 billion baht.

The recycling plant is located in Rayong's Asia Industrial Estate. Construction has begun and is scheduled to be completed in 18 months.

The recycling plant will process single-use plastic waste, including polyethylene terephthalate and polyethylene, which are materials used for plastic packaging for bottles, straws and bags.

Apiphop Phungchanchaikul, vice-chairman of the plastics industry club at the Federation of Thai Industries (FTI), said the private sector formed the Public-Private Partnership for Sustainable Plastic and Waste Management (PPP Plastic) together with 15 agencies and companies, including the FTI.

"PPP Plastic aims to manage and recycle all plastic waste in Thailand by teaming up with 18 subdistrict state agencies in Rayong," Mr Apiphop said. "We have a pilot model for a waste separation system in Rayong, expecting to recycle 100% of plastic waste within five years and reduce waste in landfills by many tonnes."

Communities, villages and students have also joined the project.

"They can bring single-use plastic bags and PET bottles to sell at community enterprises," Mr Apiphop said. "All waste will be circulated at the separation system in Rayong."

Rayong generates total waste of 1,200 tonnes a day, and the existing separation plant can recycle roughly 500 tonnes on a daily basis. The remaining 700 tonnes will be sent to other companies for further waste management.

Plastic waste accounts for 27% of total rubbish at the separation plant in Rayong.

"In addition, PPP Plastic plans to generate power from waste through a gasification technology, feeding it 200 tonnes of waste per day," Mr Apiphop said. "The project is expected to generate electricity of 10 megawatts. It will begin commercial operations in March 2021."

PPP Plastic also plans for non-recyclable plastic waste to be combined with asphalt for road construction.

"This project is being piloted in Amata City Rayong, RIL Industrial Estate and some 7-Eleven stores in Rayong," Mr Apiphop said. "PPP Plastic plans to bring this concept for road construction to state agencies in Rayong as well."

He said PPP Plastic is studying the feasibility for new waste separation and management plants in the Eastern Economic Corridor (EEC), expecting to complete the project by this year.

"We are concerned the EEC will create new waste in the region, so we have to prepare the recycling system for the future," Mr Apiphop said.

PPP Plastic aims to reduce plastic waste both onshore and offshore by 50% in 2027.

The private sector is calling on the government to ramp up support with investment incentives and measures for companies in waste management and separation.

Nattapol Rangsitpol, director-general of the Office of Industrial Economics, said the Industry Ministry is working with other state agencies to create incentives to support new investment in the circular economy concept.

Companies or investors creating new waste or taking a stance that is not environmentally friendly will have to comply with the new law, Mr Nattapol said.