The government made an official announcement on Dec 12, 2018 that PTTEP won the auctions for the two gas fields. PTTEP joined with the UAE's Mubadala Petroleum on the Erawan (G1/61) concession, while subsidiary PTTEP Energy Development submitted a solo bid for the Bongkot (G2/61) concession.

PTTEP and Mubadala competed with US-based Chevron and its partner Mitsui Oil Exploration of Japan.

Chevron is the operator of the Erawan field and has to transfer the operations to PTTEP and Mubadala in 2022.

But the loser and the referee in the competition have yet to come to terms.

The Erawan and Bongkot auctions resulted in a new operator, and it's typical for the existing operator to allocate a decommissioning expense for unnecessary drilling platforms.

There are two steps to transfer petroleum operations: passing on drilling platforms to the new operator and decommissioning the infrastructure, then leaving the services.

Chevron has considered transferring the drilling platform at Erawan to PTTEP and Mubadala after the concession ends, including the decommissioning expense.

Chevron is keen on this business model, which is similar to other concessions in build-operate-transfer models in which all assets are owned by the government after the concession ends.

In June, the Mineral Fuels Department notified Chevron and Mitsui that the collateral cost for 300 drilling platforms stands at roughly 100 billion baht.

The dispute came about when the Energy Ministry legislated the ministerial regulation in 2016 that the decommissioning and collateral expenses should be allocated for two years before the auctions take place.

The Mineral Fuels Department has noted that the collateral budget must include the expenses by the October deadline. 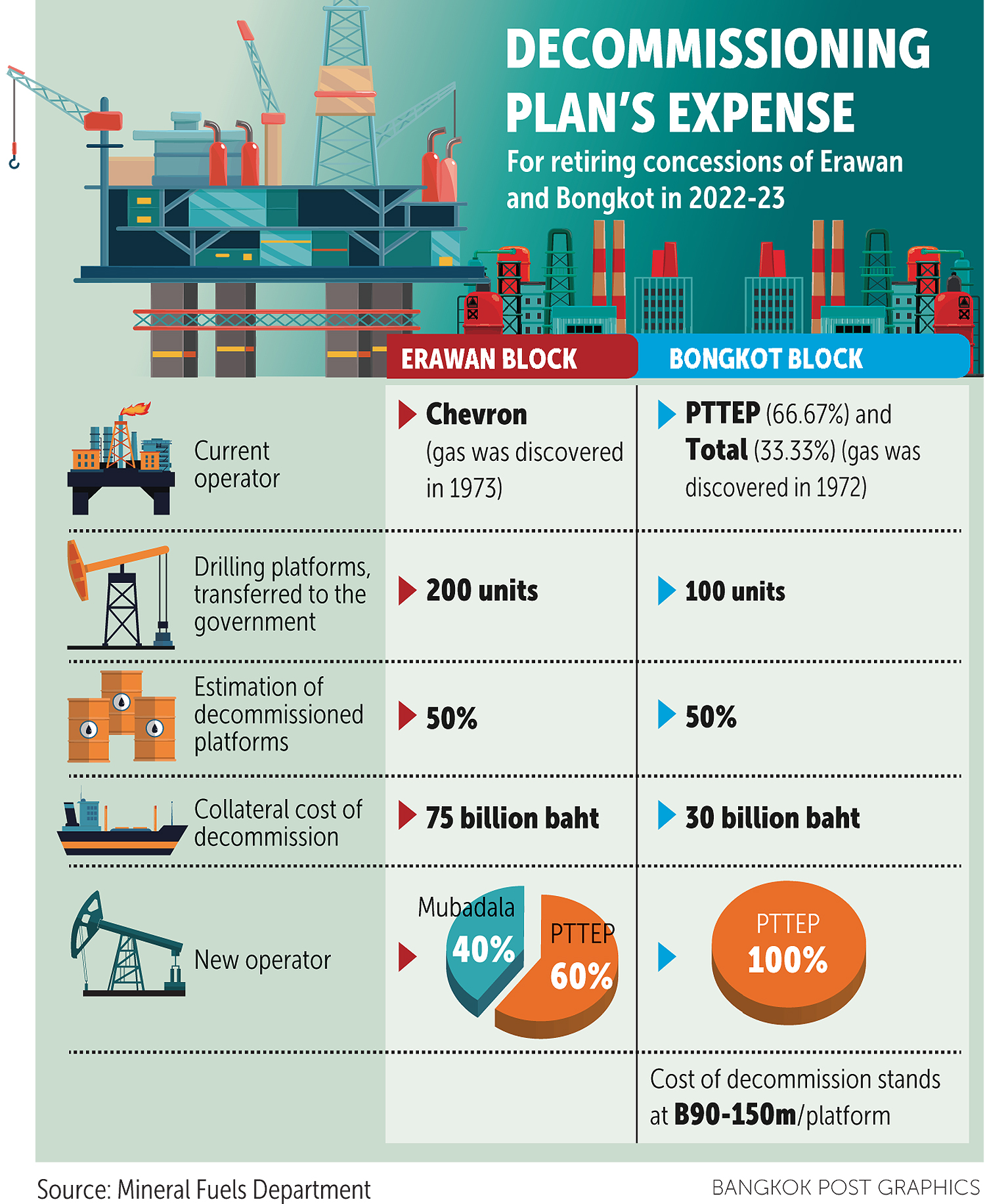 A source from an international consultancy who requested anonymity said the main point of dispute is a ministerial regulation in 2016. The existing operators believe that this regulation is inconsistent and contradicts other concession contracts signed since 1971.

Energy Minister Sontirat Sontijirawong said the Energy Ministry is perceived as having value for politicians, who can benefit from controlling energy policies, including the two largest gas blocks in the Gulf of Thailand.

The source said arbitration proceedings by Chevron bear the risk of unforeseen results.

"The worst-case scenario is Thailand will suffer from yet another stupidity fee, imposed by the government," the source said.

During the negotiation process, the government can find resolutions to establish agreements with private operators in order to protect the national interest, promote Thailand's energy security and preserve the country's investment reputation.

The source said overseas investors are keeping track of the issue because they want reassurance that Thailand will respect concession contracts and laws for foreign investment projects.

With the Hopewell train network and Akara gold mine cases, the government lost two cases in court, harming the country's investment reputation.

"The Erawan and Bongkot gas fields will be another test for the government's decisions," the source said. "With the right decision, the dispute can elevate Thailand's investment status for foreign companies, but should the government fail in this, many companies will ignore Thailand and go to neighbouring countries."

Chanamas Sasnanand, senior vice-president for the finance division of PTTEP, said the collateral and decommission budget has been allotted roughly US$600-700 million, based on equity ownership in the Bongkot field.

"The dispute depends on the ministry's directives, and PTTEP cannot comment more on this matter," Mrs Chanamas said.

PTTEP plans to enter the Erawan block in order to ensure uninterrupted gas production before becoming the new operator in 2022.

Mr Sontirat said the Energy Ministry is working on the negotiation process, but he declined to reveal any in-depth details.

"Every decision has to comply with the law," he said.

The dispute will be ended by Mr Sontirat's decision, which will not be passed on to the cabinet. He said it will take a short period for the process.

"I would say solving this dispute requires my best efforts, and my priority will be ensuring the most benefit for the country," Mr Sontirat said.