This aromatics plant is part of the Esso refinery complex in Sri Racha. The refinery has a maximum rated capacity of 174,000 barrels per day.

The plan to reclaim a 3,000-rai land plot in Sri Racha district, Chon Buri province has ignited voices of support and dissent as questions are raised over whether the end result will come at the expense of the environment and local communities.

The potential area of reclaimed coastland is near Laem Chabang seaport.

Two state agencies, the Industrial Estate Authority of Thailand (IEAT) and the Petroleum Institute of Thailand (PTIT), will soon start feasibility studies under an order initiated by Industry Minister Suriya Jungrungreangkit. The plan is to issue the findings in early 2020.

Although reclaimed coastland is nothing new in Thailand -- the government has used the method for many infrastructure projects like seaports and bridges -- the latest plan comes in response to a request from US energy multinational ExxonMobil. 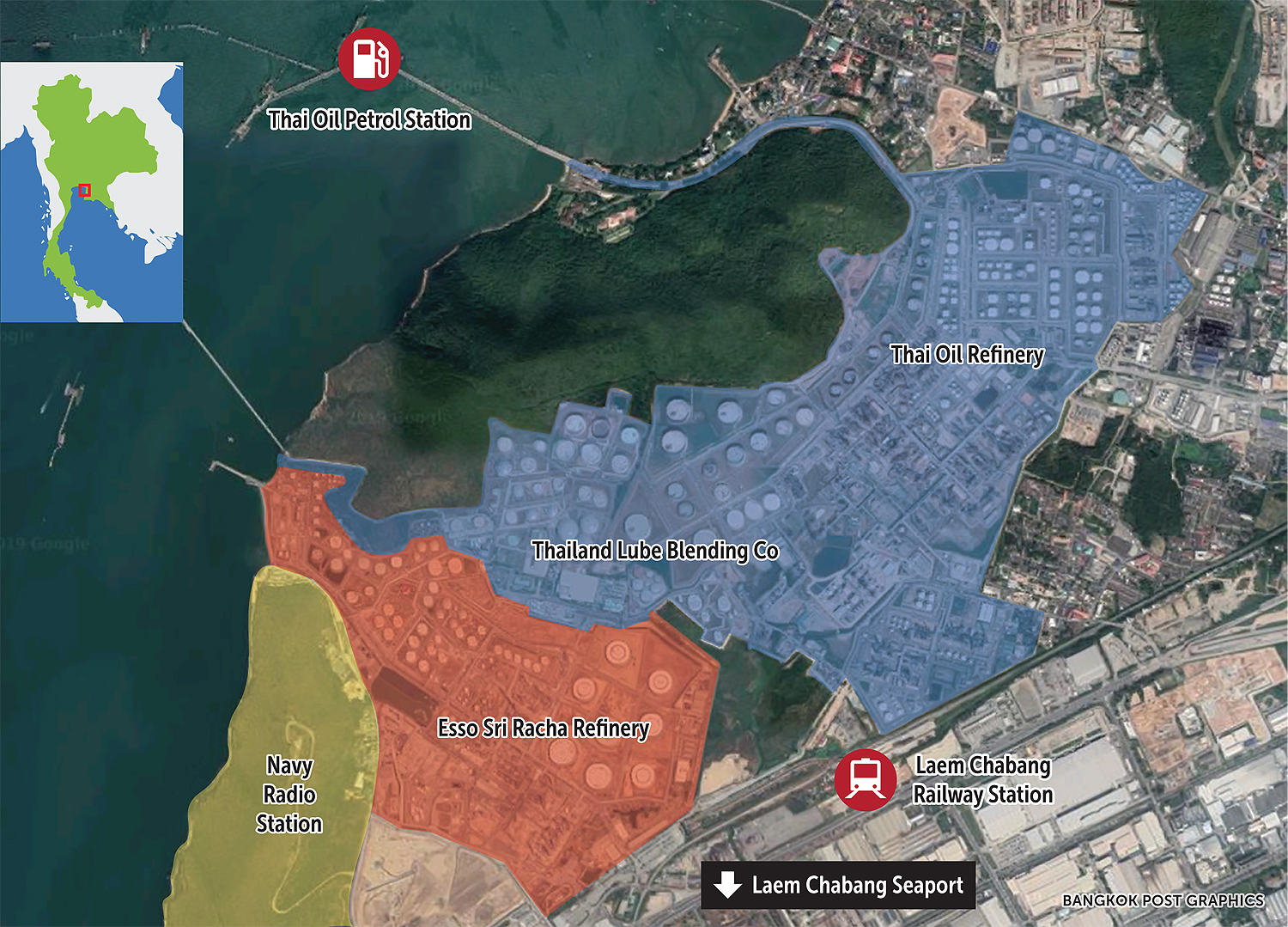 WHERE IT ALL BEGAN

ExxonMobil is eyeing a 330-billion-baht investment in an ethylene cracker and refinery expansion project in Sri Racha.

The Texas-based company met Thai officials in March 2018 to outline the investment plan and ask authorities to provide support for a potential land plot next to ExxonMobil's existing Sri Racha refinery.

Company executives met government officials twice over a year ago, explaining that land around the refinery is fully used with no room to expand.

The existing refinery is operated by local arm Esso Thailand Plc on 3,500 rai of land.

After the new government took office after March's general election and Mr Suriya was installed at the Industry Ministry, ExxonMobil executives met him for a discussion about the project on Aug 9.

What ensued after the discussion ended was an order by Mr Suriya for the two state agencies, the IEAT and the PTIT, to study the feasibility of allowing 3,000 rai of reclaimed coastland for the facility.

In Mr Suriya's own words, the reclaimed coastland will support not only ExxonMobil's ambitious project, but also other companies that aim to localise their facilities in Sri Racha.

"I will listen to their [protesters and activists] opinions," he said. "If the study result shows that the reclaimed coastland will create higher economic value to Thailand, the government has to push forward with the project.

"[But] if the study finds a huge negative impact on the environment and life quality, we will put off the project."

ExxonMobil told the Bangkok Post via email that the company is evaluating plans for investment in another major integrated chemical complex in Asia. The facility would incorporate advanced technology and environmental friendliness, according to the company.

The company said the project would support global chemical demand, which is expected to increase by 40% from 2016 to 2040. Much of the growth will occur in the Asia-Pacific region.

"The proposed project is expected to be adjacent to the existing Sri Racha Refinery to produce advanced polyethylene and polypropylene polymers, which will lead to environmentally friendly products," the company said in the emailed statement. "This project strongly supports the Thailand 4.0 initiative and the Eastern Economic Corridor (EEC) objectives, including job creation, human capital development and application of advanced technology." 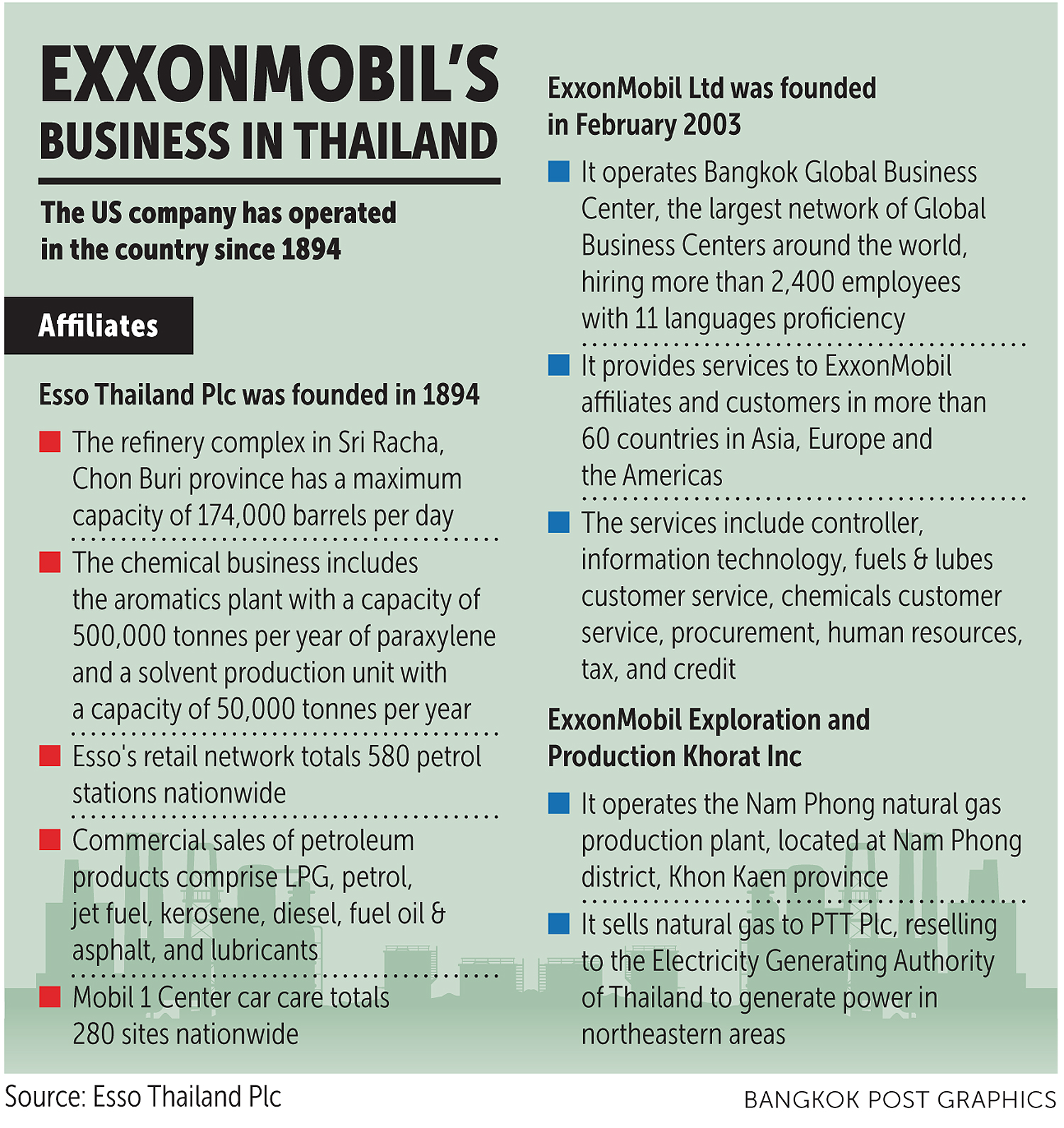 The IEAT and the PTIT will soon sign an agreement on the feasibility study, said IEAT governor Somchint Pilouk. The PTIT will be tasked with conducting the study.

"It will take roughly six months for the study's result [to come out], then the IEAT will propose it to its board committee and the cabinet to approve the study," Ms Somchint said.

The IEAT and the EEC Office have also received a request from ExxonMobil to seek a land plot in one of the EEC provinces for its massive new project.

"Land plots in both Map Ta Phut and Laem Chabang have been sold and leased, while there are three owners in those areas: the Port Authority of Thailand, the Treasury Department and the private sector," Ms Somchint said.

ExxonMobil itself suggested to the government the option of coastland reclamation to extend the land plots, which require 1,000-1,300 rai for the expansion project, she said.

"The US company has also requested the government develop related infrastructure on that reclaimed coastland at a similar standard to Map Ta Phut and Laem Chabang seaports," Ms Somchint said.

But she insisted that reclaimed coastland for the sole benefit of Exxon Mobil's projects would not be worthwhile, as the new land should support all companies wanting to invest in the EEC provinces.

"The government can put off the reclaimed coastland plan immediately if the study does not support it," Ms Somchint said.

The study will be conducted comprehensively and examine environmental, economic and social impacts. The study will also take into account concerns voiced by locals.

The IEAT will be the leader in reviewing the reclamation plan, but it has yet to decide whether the government would develop the plan itself or form a joint vehicle with private companies.

PTIT executive director Kurujit Nakornthap said the institute cannot provide any more information about the reclamation study until it receives further details from the IEAT.

While the project's feasibility study has yet to take shape, observers have begun voicing opinions on the possible pros and cons of the reclaimed coastland and implications for the EEC initiative.

Energy expert Manoon Siriwan said reclamation of coastland is among several options that the IEAT can explore. Looking at land plots owned by the Port Authority of Thailand is among the options that can be deliberated, he said.

"[The plan] will depend on the IEAT's study as to whether the environment will be damaged by coastland reclamation," Mr Manoon said. "Other countries such as Singapore, Malaysia and Japan have used this method to develop their projects.

"[ExxonMobil's project] will have to be observed as to whether it is in line with the EEC initiative. Overall, it seems to facilitate job creation and the technology can help support S-curve industries."

The EEC needs to have a major industrial project to jump-start other projects in the vicinity because the roadmap of major ongoing projects is still full of ambiguity, Mr Manoon said.

Srisuwan Janya, president of the Stop Global Warming Association, voiced an opposing view, saying the reclaimed coastland will seriously affect marine natural resources and coasts, as well as traditional fishing and local tourism in areas such as Ao Udom and Koh Si Chang.

"It is not necessary to carry out the plan and the government should reconsider it," Mr Srisuwan said.

The association suggests that the government should study the feasibility of logistics for transport of chemical products, instead of focusing on marine shipments or petroleum pipelines.

"It will be the best choice for all stakeholders -- local people, the environment, the authorities and the company," Mr Srisuwan said. "The country's road infrastructure can serve and facilitate ExxonMobil's project, and the road expansion is extensively covering the Laem Chabang seaport and surrounding refineries."

He said the reclaimed coastland will come with a higher cost of development if the government decides on a wholly owned investment. If the government carries out the plan, local people could file a lawsuit to request the Administrative Court to issue an injunction and put a stop to the project.

There have been coastland reclamation projects in the southern provinces and in Pattaya City, but the scale is not as massive as the planned 3,000-rai reclamation project, said Pichien Amnajvaraprasert, vice-chairman of the EEC Committee.

"The benefits yielded from this project seem not to be worthwhile."

Regarding voices of support arguing that ExxonMobil's planned investment will be a catalyst drawing new investment incentives, Mr Pichien said this notion is merely a claim to justify benefits that go to a handful of people and major corporations.

"So far, local communities have not seemed to reap any benefit from the EEC projects, as the projects do not develop community livelihood and participation from locals has been minuscule," he said.

Phanom Kanjanathiemthao, managing director of Knight Frank Chartered Thailand, said the project is a risky move because it's prone to encounter resistance from local communities, the public and environmentalists, since the impacts from land reclamation are undeniably strong.

"It will affect the coastal environment, marine ecology and tidal pattern, which will change or destroy an ecosystem along the coasts surrounding the project," Mr Phanom said. "[Approving the project] will depend largely on whether it will get an approval on the environmental impact assessment report or not."