A smartphone user looks at the 1,000 baht cash giveaway on the G-Wallet mobile application. More than 1-million recipients signed up for the cash rebate in less than 14 hours on the first day of registration. (Photo by Apichit Jinakul)

The government's 1,000-baht cash giveaway and the 15%-cash rebate scheme received overwhelming support from people on the first day of registration, with the first million recipients signing up in less than 14 hours.

The registration website closed at 1.43pm yesterday after the 1-million quota was reached, said Lavaron Sangsnit, director-general of the Fiscal Policy Office.

The government will offer perks to 10 million registrants based on a first come, first served basis.

Registration is limited to 1 million per day, with the period running through Nov 15.

The cash handout and cash rebate schemes are part of the government's 316-billion-baht stimulus package, hoping to boost the country's economic growth to at least 3% this year after posting 2.3% growth year-on-year in the second quarter and 2.8% in the first.

To be eligible for the cash handout and the 15% cash rebate of up to 30,000 baht for tourism-related spending, Thais aged 18 and older are required to sign up at the specified website and download the Pao Tang mobile app from Krungthai Bank (KTB).

The rebate will be paid out by the government later.

Registrants will receive an SMS to confirm their privileges within three business days.

The cash handout needs to be spent at participating shops in specified provinces within two weeks, while the 15% rebate can be spent in any province.

Neither perk can be used in the recipient's home province.

Recipients can spend from Sept 27 to Nov 30.

Finance Minister Uttama Savanayana said the ministry has no plans to increase the number of recipients from 10 million, despite the strong response from the public.

However, the ministry decided to extend the registration period for participating merchants from Sept 20 to Oct 15.

As of Sept 20, more than 70,000 shops had signed up to take part in the schemes, increasing to 150,000 when Thong Fah Pracha Rat shops and those equipped with electronic data capture machines are included.

The website's capacity can reach 200,000 in terms of those queuing for the system.

He said the bank is very careful with registrant's data privacy.

Ekniti Nitithanprapas, director-general of the Revenue Department, said information used in the registration process of both merchants and recipients has nothing to do with tax payment. 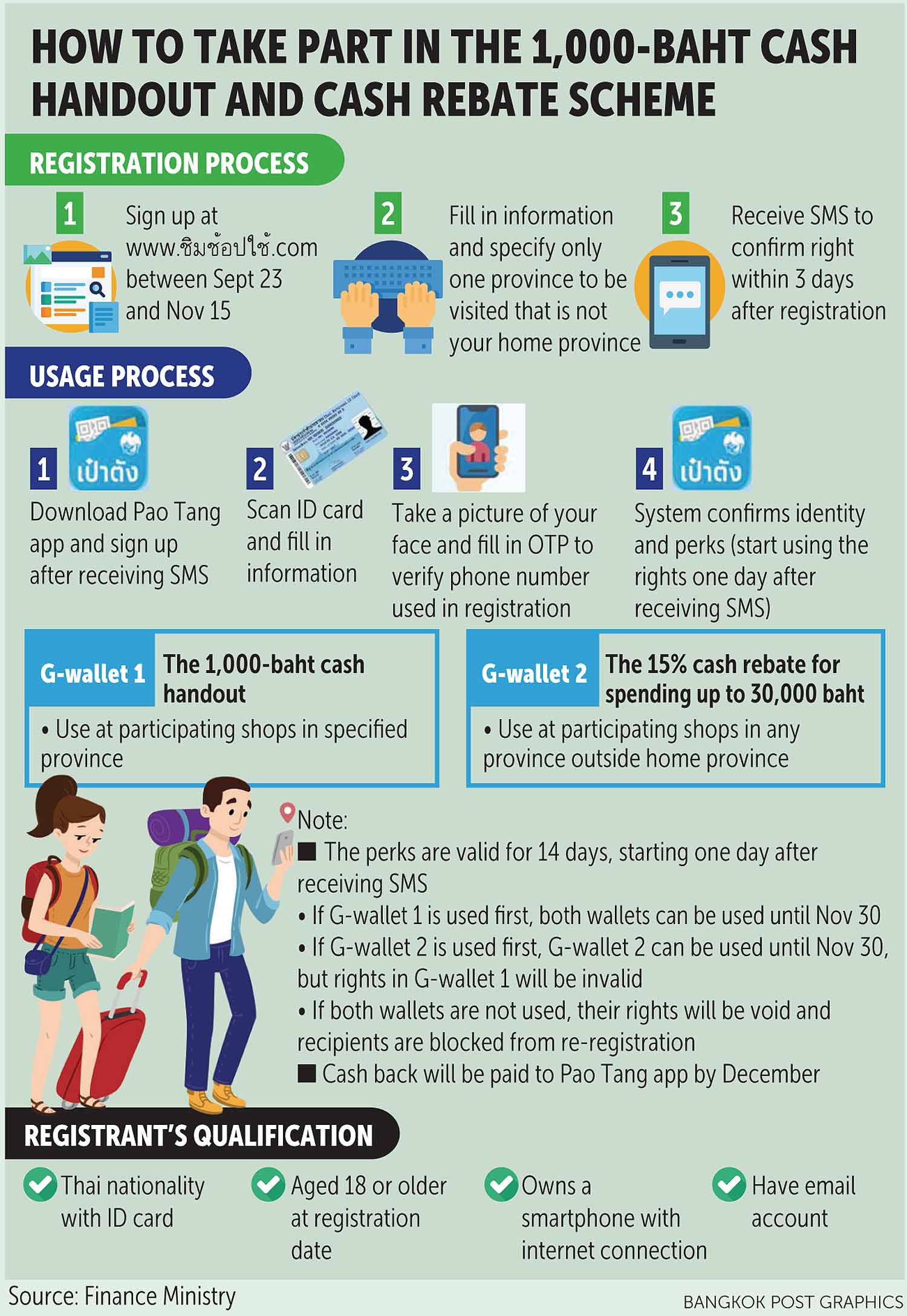 The cabinet on Thursdaygave the green light to establish a centre to handle the country’s economic rehabilitation from the coronavirus crisis.