Motorists plough through traffic congestion caused by the construction of a monorail, the Pink Line, in front of the Central Chaeng Watthana shopping mall. The 34.5km rail route will run from the Government Complex in Nonthaburi to Ramkhamhaeng 192 Road near the Romklao intersection. (Photo by Wtacharawit Phudork)

After Green, Blue, Purple, Yellow, Pink and Brown, it is time for commuters to add Grey to their trips.

The Grey Line is a new monorail project linking Vacharapol in northern Bangkok with Thong Lor in the Sukhumvit business area as well as Lumpini Park with the Tha Phra area in Thon Buri.

The project will be developed by the Bangkok Metropolitan Administration (BMA).

The project has been in the BMA pipeline for many years yet has been marred by land access issues. The original route was designed as a 39.8 km monorail running from Vacharapol-Thong Lor-Phra Khanong-Lumpini Park-Chong Nonsi-Rama III-Tha Phra.

The project moved at a slow pace. The BMA needed to ask the Expressway Authority of Thailand (Exat) to use land along the Ram Intra-At Narong Expressway for the construction and it had to reconsider the route as some parts might overlap and some land might be impossible to clear.

Under the adjusted plan, the monorail will be divided into two parts instead of running as a whole line. The first, will be 16.2 kilometres in length, starting from Vacharapol, passing areas such as Kaset-Nawamin Road, Lat Phrao Soi 87, Rama IX Road, Phetchaburi Road and Thong Lor.

"The Grey Line has always been a high priority for Bangkok governor Aswin Kwanmuang. We have been working hard to make it come true. Recently, hurdles have been cleared. The Grey Line can serve city folks as soon as 2023," Sakoltee Phattiyakul, the deputy governor of Bangkok told the Bangkok Post.

Exat recently approved the City Administration request to use their land to build the Grey Line monorail along the Ram Intra-At Narong expressway. Meanwhile, the BMA is reportedly planning to replace the Bus Rapid Transit (BRT) lane on Rama III and Chong Nonsi with a monorail structure.

BMA is preparing an environmental impact assessment (EIA), as well as public hearings.

Once the details of the route design and its EIA report are finished, the city expects to forward the study to the Office of Natural Resources and Environmental Policy and Planning for approval in the middle of next year.

The Grey Line is a light rail mass transit project, designed to serve as feeder system that BMA hopes will ultimately replace buses.

"A monorail is smaller than the skytrain and subway. But the Grey Line can serve up to 35,000 passenger trips per hour and that is quite a lot," Mr Sakoltee said.

"City Hall supports the Grey Line project because it does not require a huge investment like the skytrain and subway. It will also not affect locals residents as officials will not expropriate their land," Mr Sakoltee said.

At present, a trip from the Vacharapol area to Sukhumvit Road is not so seamless because there are few direct bus services, while motorists can choose only between the Ram Intra-At Narong expressway or the roads beneath it, which get crowded during rush hour.

The future of Grey Line looks bright because it has also been endorsed by the Ministry of Transport.

The Office of Transport and Traffic Policy and Planning supports the construction of the Grey Line as it -- together with the Brown Line -- are part of the state's plans to solve Bangkok's heavy traffic congestion.

"This project has a rather good value-for-money if we take into account the number of passengers that the line can serve relative to the cost of constructing the structure," deputy office chief Chayathan Promsorn said.

His office will work in parallel with City Hall to push ahead with the Brown Line, where the cost is estimated at around 50 billion baht. The Brown Line will intersect the Grey Line at Kaset-Nawamin station.

The Brown Line project is expected to be tabled before the Land Transport Committee next month, according to a Transport Ministry source.

In another development, Mr Chayatham said his office will also ask the committee to consider measures to improve traffic flow on crowded streets, including areas where new electric train systems are being built.

Ratchadaphisek Road is among the targets. The street has up to 28 crossroads, but the government has so far built only 18 flyovers and underpasses to solve traffic problems, he said. 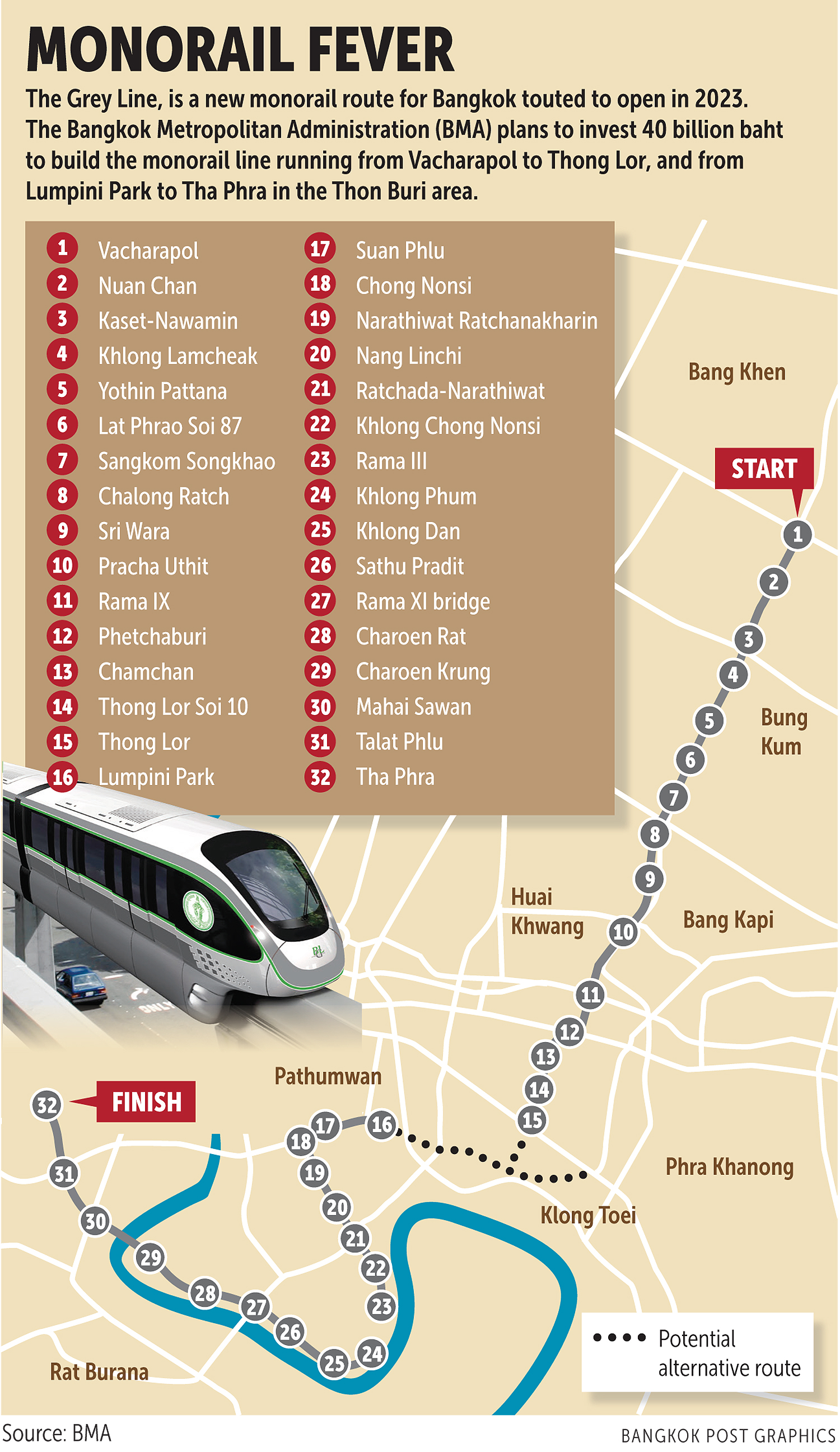