Cambodia at the crossroads
Business

Cambodia at the crossroads

Losing EU trade privileges could hurt, but it won't be the end of the world, say government and businesses.

Cambodia is just five months away from learning whether its US$8-billion garment and footwear industry will continue to enjoy preferential trade status in the European Union (EU), the country's second largest trading partner and largest export market.

Both the Cambodian government and businesses say they are preparing to weather the storm if the privileges are suspended. Some say the prospect of change is helping to speed up the adoption of reforms to improve productivity and export competitiveness.

At stake is duty-free access for all exports except arms and ammunition to EU markets under the Everything But Arms (EBA) programme. Termination could affect the garment industry the most, putting workers at risk of losing jobs and dragging down economic growth overall as exports slow, experts say.

A World Bank report estimates lost export revenue of $654 million -- $510 million for garments and footwear and $144 million for milled rice -- if the European Commission (EC) ends the EBA privileges, which have been in place for 18 years.

"Currently, 46% of our total exports go to the EU," Ken Loo, secretary-general of the Garment Manufacturers Association in Cambodia (GMAC), told Asia Focus.

"We will still be able to export to the EU, albeit without any trade preferences. [But] this means that we will be less competitive price-wise as Cambodian products will be required to pay the prevailing import duties."

In January, the EU imposed customs duties on rice from Cambodia and Myanmar at €175 ($195) per tonne in the first year, before progressively reducing it to €150 in the second and €125 in the third year. The move was ostensibly aimed at protecting European rice producers such as Italy.

The EBA review was a response to the 2018 election, in which the governing Cambodian People's Party (CPP) won all 125 seats in the National Assembly. The vote was widely condemned in western countries as a sham. Prior to the poll, the main opposition Cambodia National Rescue Party (CNRP) was dissolved by the Supreme Court, and leader Kem Sokha was arrested and charged with treason, leaving the CPP with no real challenger.

The EC said the growing climate of "political repression" under Prime Minister Hun Sen, who has been in power since 1985, justified a review of EBA. 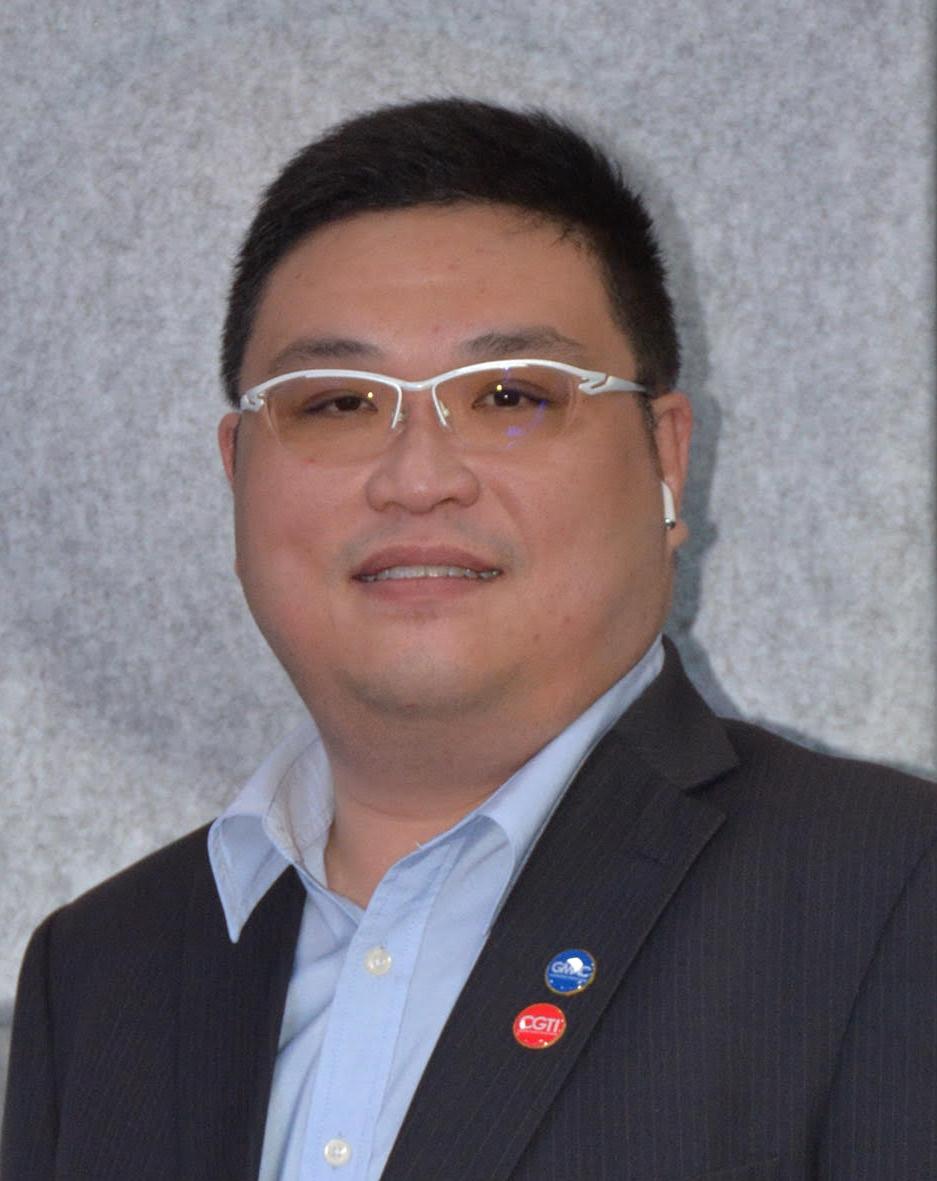 "The government has tried to address many of the concerns raised by the EU," says Ken Loo, secretary-general of the Garment Manufacturers Association in Cambodia. SUPPLIED

Hun Sen seems unfazed by the prospect of being punished economically. In March, he was quoted by the Phnom Penh Post as saying that EBA wouldn't make Cambodia rich, and it wouldn't become poor without the trade perks. He also asserted Cambodia's sovereign right to make its own decisions.

In February, the EC launched a 12-month EBA review and withdrawal process with Cambodia. Myanmar and Bangladesh are also facing complaints about human rights but their EBA reviews have not begun yet.

The evaluation process in Cambodia ended in mid-August. The EC will issue a report in November and the Phnom Penh government will have one month to respond before the final decision is made in February 2020.

The Ministry of Foreign Affairs in February condemned the EC action as "politically motivated".

"While many countries receiving EU trade preferences have not fully complied with these international conventions and to which the EC has closed a blind eye, the EC hiding behind its political agenda has unfairly imposed and expected the 'perfect implementation' of these Conventions from Cambodia," it said in a statement.

The European Chamber of Commerce (EuroCham) in Cambodia has also called the EBA withdrawal process "counterproductive to Cambodia's socio-economic transformation".

Ou Virak, a political and economic analyst and president of Future Forum, said the gutting of the political opposition appeared to have left the EU few options but to "stick to their guns on Cambodia and the people of Cambodia will likely be the ones that pay the price."

The EC said its review was based on three issues: labour rights related to the right to strike and working conditions; human rights abuses related to land grabs; and "political repression".

However, Mr Virak argues that the review has little to do with actual human rights or political conditions.

"This has been a source of frustration for Cambodia as the EU, while condemning Cambodia, is continuing business as usual with authoritarian states like Vietnam, Laos and Thailand," he said.

As Cambodia's largest economic sector, the garment and footwear industry provides jobs to about 700,000 men and women. The National Union Alliance Chamber of Cambodia, which represents some 400,000 workers, estimated that 43% of garment workers (or 225,000 people) and 20% of footwear workers (about 20,000 people) would be left unemployed by EBA removal.

"Research suggests and history demonstrates that economic sanctions lead to an increase in poverty -- especially among women, minority communities and other marginalised groups," it said.

Accounting for around two-thirds of total exports in 2018, shipments of garments, footwear and travel goods grew by 17.6% to a five-year record of $9.5 billion, according to the World Bank.

The GMAC says the suspension of EBA benefits "would not serve the EBA programme objective of poverty eradication and sustainable development".

Mr Loo of the GMAC says Cambodia does not deserve to lose the benefits. "I believe that Cambodia does comply with the ideals and objectives of the scheme and that we should continue to enjoy such preferences. In addition, the government has tried to address many of the concerns raised by the EU," he told Asia Focus.

In any case, the government and businesses have been preparing for any scenario including permanent loss of EBA benefits, according to the Ministry of Commerce.

It said "deep reforms" to cut production and transport costs are meant to ensure that the economy will be less affected by external factors, while benefits of workers, farmers and other citizens will be protected. The World Bank has also said cutting production- and export-related costs would help mitigate the impact of EBA withdrawal.

While garment exports contribute a lot to GDP, Europe is not the only market for the country. The US remains Cambodia's largest single export market with a total value of $3.8 billion in 2018, according to the United States Trade Representative (USTR).

"With or without the EBA, our goal is to continuously make our industry more competitive and lower our costs and become more efficient," said Mr Loo. "We [will] continue to export to the US (26% of total exports), Japan, Canada and China as well as to other countries around the world."

Despite the threat of EBA suspension, 30 new footwear and travel goods factories opened in Cambodia in the first half of 2019, the Phnom Penh Post reported in July. In fact, a future without EBA could provide an opportunity to create "a new history for Cambodia", according to government spokesperson Phay Siphan.

Speculating that the EU might use selective sanctions instead of removing EBA privileges entirely, Mr Virak said the garment sector could be spared while sugar and other industries could be targeted.

"They might consider other more politically related sanctions against the leadership of the ruling party as an additional if-needed response. This could mean visa restrictions or cutting direct aid to the Cambodian government," he said. 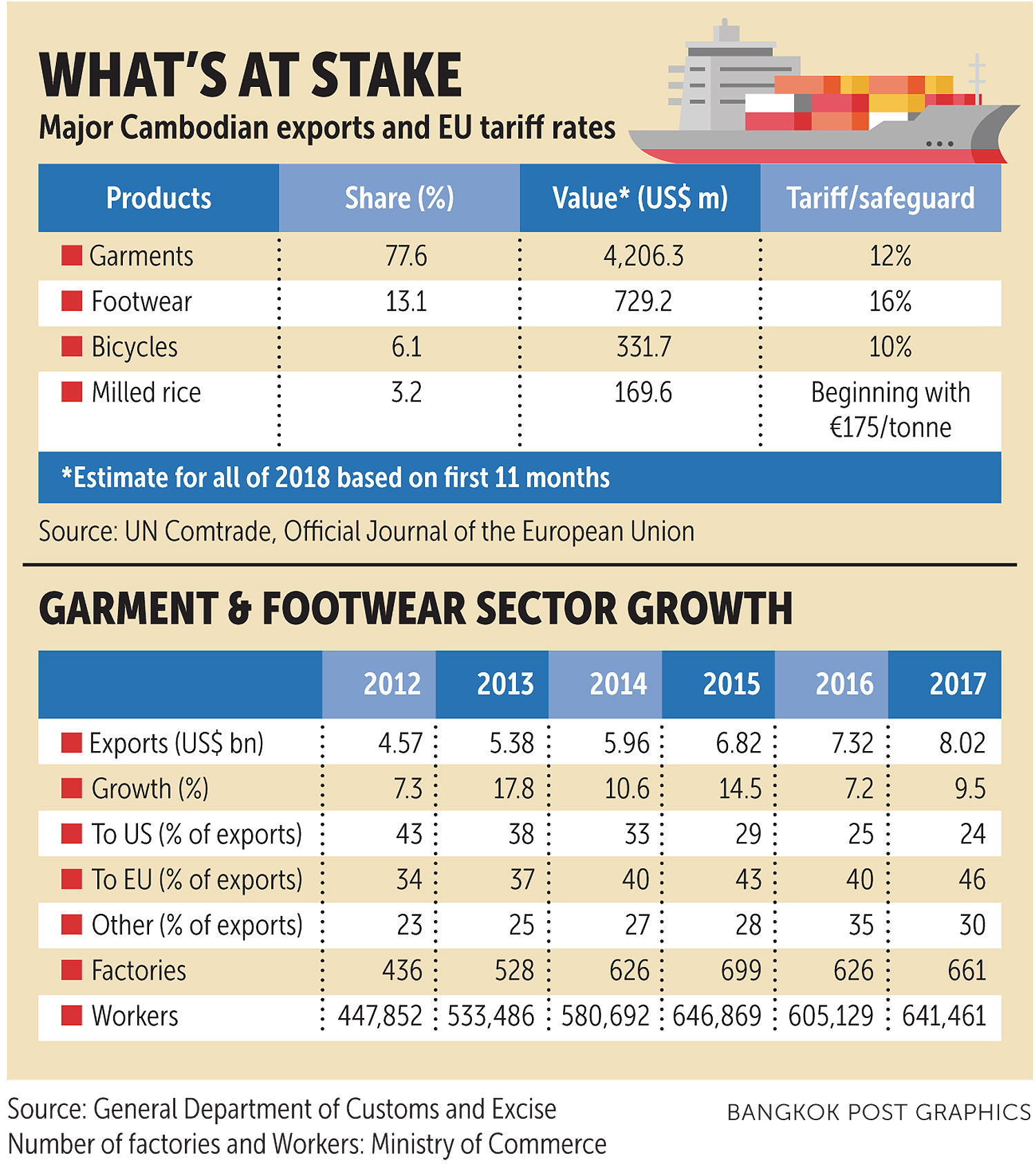