The Joint Standing Committee on Commerce, Industry and Banking (JSCCIB) has downgraded Thailand's GDP growth outlook for 2019 a third time to 2.7-3% and cut the export projection to a 0-2% contraction amid the US-China trade war, Brexit woes and baht appreciation.

The JSCCIB's previous projection for GDP growth was 2.9-3.3%, with shipments ranging from a 1% contraction to 1% growth. But the private sector is maintaining its inflation projection for the year at 0.8-1.2%. 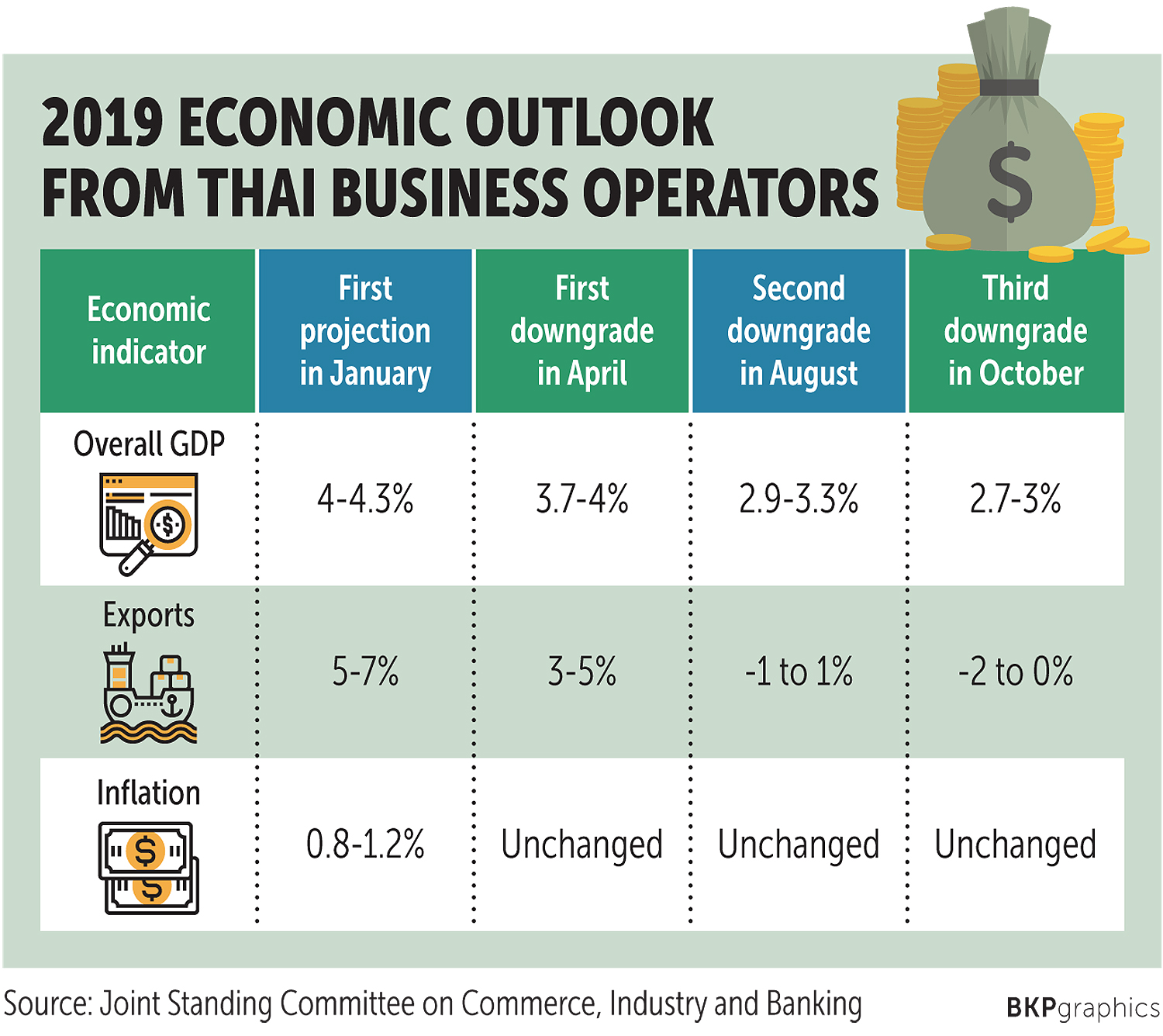 Kalin Sarasin, chairman of the Thai Chamber of Commerce, said the country is suffering from the trade war and the negative momentum that is pressuring the trading sector globally.

"Thailand's exports cannot avoid this negative impact, while the baht is stronger than other emerging countries' currencies, causing bearish shipment figures," he said.

Mr Kalin said business operators are concerned about a further slowdown in the fourth quarter from various headwinds.

"It seems the country's tourism sector will suffer less from global tensions, even though Chinese visitors have slightly declined from the weak yuan," he said. "Chinese tourists are still the largest number of visitors to Thailand, and the tourism industry is now the only economic engine to beef up GDP."

Mr Kalin said business operators have high expectations for the government's 316-billion-baht stimulus package, which aims to boost economic growth to at least 3% this year.

The 1,000-baht cash giveaway and 15% cash rebate under the "Taste, Shop, Spend" scheme are parts of the stimulus package meant to inject 10 billion baht to circulate in the economic system.

Furthermore, there is an income guarantee scheme for farm products to increase household income for farmers.

The JSCCIB expects the government to extend and add more stimulus measures to boost the economy, as well as speed up regular budget disbursement in fiscal 2020, which started this month.

Mr Kalin said business operators forecast a loss of 20-25 billion baht from the flood situation in the northeastern region.

"The government should launch some measures to help small and medium-sized enterprises in those flooded provinces, such as exemptions or reductions of corporate and property taxes for one year," he said.