Bangkok ranks 75th out of 102 cities worldwide in smart city rankings, according to the IMD Smart City (SCI) Index for 2019. 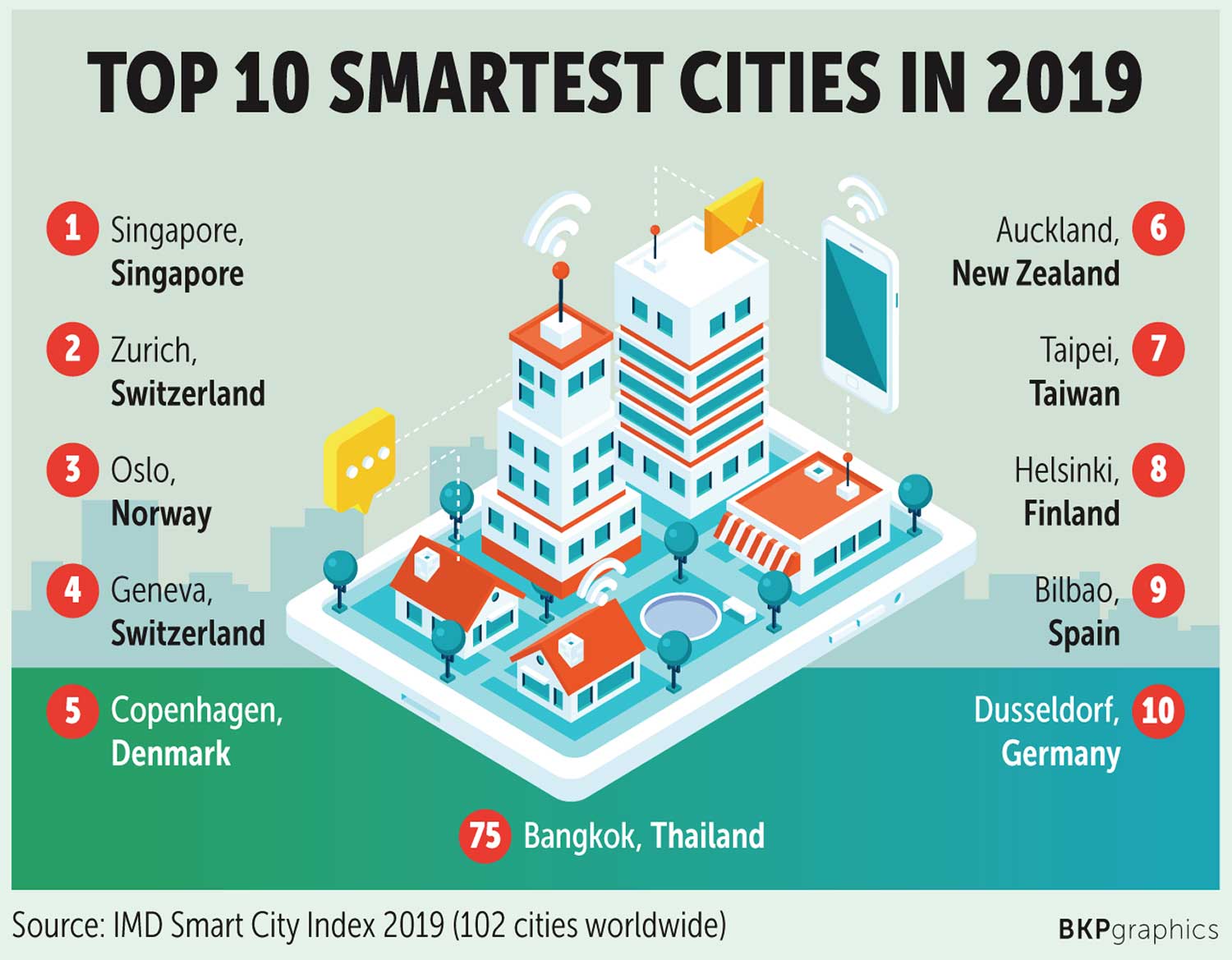 It's the first edition of the index, jointly commissioned by the World Competitiveness Center's Smart City Observatory, under the IMD Business School in Switzerland and Singapore, and Singapore University of Technology and Design.

The SCI focuses on how citizens perceive the scope and impact of efforts to make their cities "smart", balancing "economic and technological aspects" with "humane dimensions".

"Smart cities are growing and blossoming in all parts of the world," said Arturo Bris, director of the IMD World Competitiveness Center. "Economic realities cannot be ignored: cities in poorer countries face disadvantages, which will require specific actions to correct along the path towards smartness."

In response to Bangkok landing in 75th, Christos Cabolis, chief economist of IMD Business School in Switzerland, told the Bangkok Post that residents of the capital responding to the survey placed the structures of the city "below the mean of the group of cities that Bangkok is compared with".

"Big challenges of the city are issues related to mobility, as well as air pollution," Mr Cabolis said.

The availability of green spaces and general cultural activities could also be improved upon, he said.

Even though Bangkok residents appreciate the online scheduling and ticket sales for public transport, these major challenges are not satisfactorily addressed by technologies on the whole, Mr Cabolis said.

"Yet employing smart tech to address opportunities and schooling is where Bangkok fares either around the mean or above," he said. "This is crucial for the future."

Bruno Lanvin, president of IMD's Smart City Observatory, said smart cities could help attract investment, talent and trade, but it's also important to look at the long-term aspirations of citizens in the cities.

"Without citizen support and engagement, smart cities may not be sustainable," Mr Lanvin said. "The SCI intends to fill a gap by being a reference and tool for action to build inclusive and dynamic cities."

There is no one-size-fits-all strategy for becoming a smart city, though all three leading cities scored highly for "structures" (how services are made available to citizens).

Singapore, for example, performs well in terms of safety, monitoring of air quality and traffic congestion, while Zurich is strong on public transport and access to medical and cultural services. Oslo's citizens laud the quality of "circular economy" solutions, online voting and bicycle mobility.

Smart is defined as assessing a city's efforts and success in embracing smart technologies to improve the lives of its citizens, Mr Lanvin said. The index is transformed into a rating, which creates an independent rating of the "smartness" of a city.

The concerns and aspirations of citizens vary widely depending on culture and the socioeconomic environment, Mr Lanvin said.