The construction industry is embracing the circular economy, which starts with design and works its way through the entire supply chain.

The circular economy -- an economic system aimed at eliminating waste and promoting the continual use of resources -- is not something that can happen in isolation. It requires everyone from the beginning to end of the supply chain to embrace the spirit and practice of 3R: recycle, reuse and reduce.

In construction, for example, everything starts with a design and materials that are compatible with 3R goals before work even starts on a building.

The UK-based Ellen MacArthur Foundation, which promotes the circular economy, defines it as one "that is restorative and regenerative by design, and which aims to keep products, components and materials at their highest utility and value at all times, distinguishing between technical and biological cycles".

In this more virtuous economic state, resources circulate within a continuous loop of use. They are no longer extracted, they are reused or recycled, and none of them are disposed of. Therefore, no value is lost.

In contrast, a linear economy consumes a large amount of resources to make products, only to dispose of them at the end of their use. That leads to resource scarcity and environmental problems. Resource scarcity pushes up manufacturing costs, which ultimately are passed on to consumers.

As more people, businesses and governments aspire to become greener, the linear economy no longer seems viable. Companies see it as a risk at their bottom line and are changing their business models. Governments are also promoting a transition toward a circular economy. The challenge is that companies have to remain competitive during the transition.

In the construction industry, the key to a real circular economy is collaboration between everyone in the supply chain, says Phongthon Tarachai, the CEO of Project Planning Service, a Thailand-based engineering professional services firm.

"A circular economy is a closed-loop supply chain where we do not dispose of materials but in turn, make sure that they come back into the value chain," he told Asia Focus. "The key to success here is for everyone in the value chain to work together toward the same circular goal."

Suttha Ruengchaipaiboon, president of Magnolia Quality Development Corp (MQDC), a Thai developer of high-rise condominiums and mixed-use projects, says that for his company, a circular economy means a focus on passive design.

"Passive design means that we spend time during our design process to make sure that we optimise the natural resources that impact our building," he told participants at a Bangkok symposium hosted by the Thai industrial conglomerate SCG.

For example, an architect or developer can design a building to face in certain direction to minimise the use of expensive material such as glass in the facade. A building can be faced away from the sun to lower air-conditioning use. This can be done at the 3D modelling stage during the design process.

After this "easy and cheap" step to save expensive material is taken care of, the next step is to add efficient equipment or materials into the building through the BIM process. BIM, or Building Information Modelling, is an intelligent 3D model-based process that gives architecture, engineering and construction professionals the insight and tools to more efficiently plan, design, construct and manage buildings and infrastructure. The software was originally released by Autodesk in 2002.

Every detail of a building can be modelled in BIM and the model can then be analysed to explore design options and create visualisations that help everyone understand what the building will look like. The model is then used to generate the design documentation for construction.

"MQDC has been doing BIM for the past eight years and we have found that just by using the software, we can reduce the use of materials by 15%," Mr Suttha said. "Bangkok produces over one million square metres of (residential) space and reducing unnecessary materials by 15% across that space is a lot." 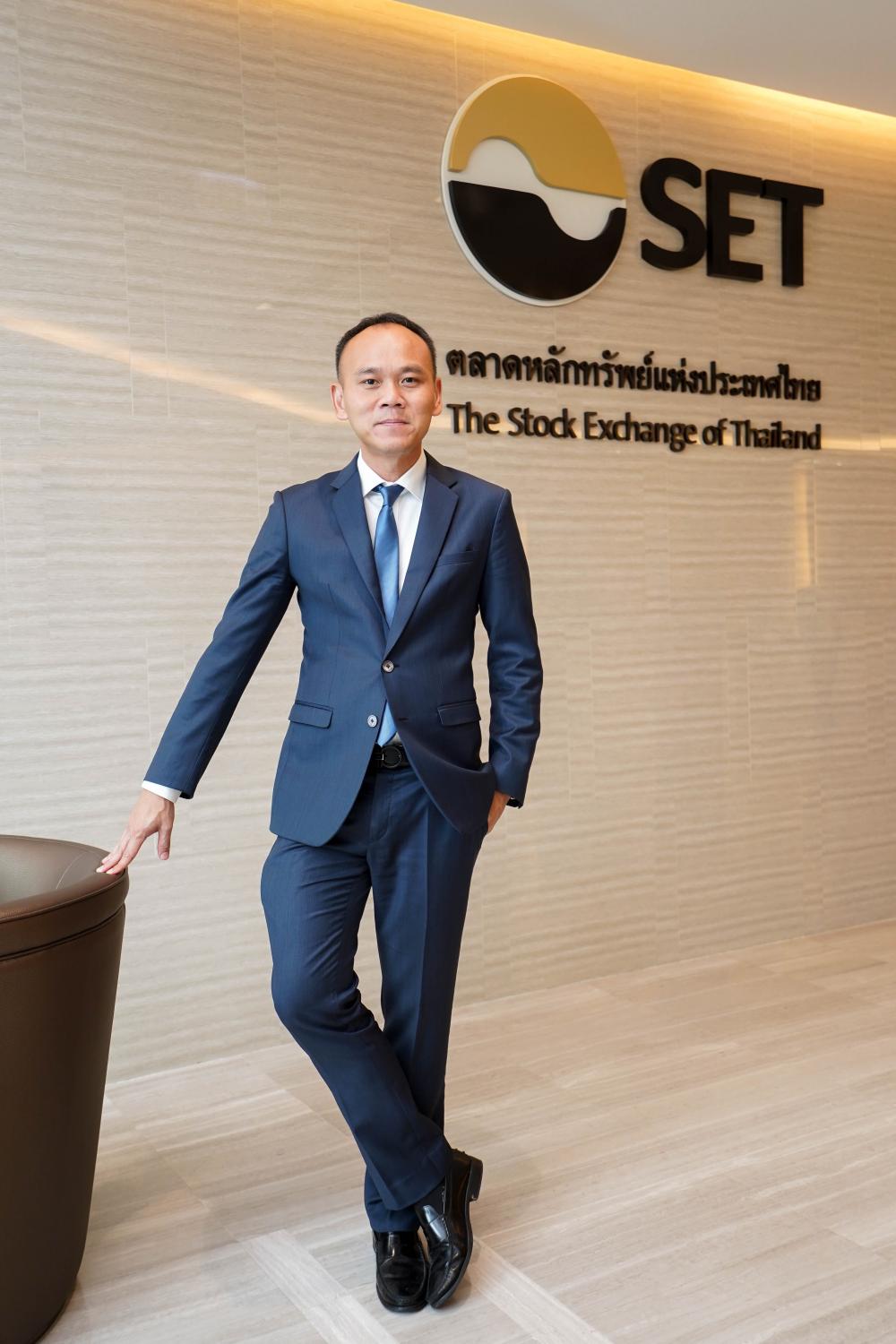 Prabhakorn Vadanyakul, managing director of Bangkok-based Architects 49, says that when he designed his award-winning house, Baan Suan Sa-Nghob in Bangkok, he incorporated his love for aviation into the design. The choice of materials was also consistent with the principles of the circular economy.

Most of the materials used for the house came from plane parts including stainless steel tension cables, doors in the shape of plane doors, a long bench in the shape of a plane wing along, with steel mesh walkways and exposed pipes combined with utilitarian materials to provide an industrial feel.

"I used aviation waste to put in some elements of my house such as the wings and the flaps from the plane," Mr Prabhakorn said. "I used a steel structure in order to eliminate waste from construction and once I finished the house, there was only one steel beam left."

Avoiding the use of wet work from cement, Mr Prabhakorn used dry fabrication on the wall instead, while the roof was designed and built to hold water to a depth of 15 centimetres to control heat. He also grew many trees surrounding the house for the same purpose.

"Because of the shade from the trees, I don't need that much energy to cool down the house via air-conditioning because the trees can do that too," he explained.

Trees can make a huge difference in a city, says Mr Suttha, who points out that average temperatures in Singapore are about 3C lower than in Bangkok without any sophisticated technology, only greenery. About 32% of Singapore is green space when compared with 7% in Bangkok. That's a "scary number" since it was over 50% just 40 years ago.

"The good news is that a lot of developers in Bangkok today are now working with architects and engineers to provide more green space for the capital," he said.

Nantapong Chantrakul, managing director of Concrete Products and Aggregate (CPAC), a major ready-mixed concrete supplier in Thailand, says his company is now concentrating on the return journey for concrete used in the construction process.

For example, after concrete is poured at a construction site, there will one to two cubic metres left over. It's not a huge amount but over the course of a year and hundreds of jobs, it adds up.

CPAC has a sediment pond to wash concrete and return the aggregate back to the process. But the washing process uses lots of water so it now reuses the washing water and reduces the amount of concrete that returns to its plants.

Material that is reused can be turned into concrete products such as planks, piles and fences, which the company provides to build school fences and playgrounds as part of its corporate social responsibility programme.

Another example to leave the returning concrete to dry in a container with a depth of 1-10 centimetres for two or three hours before breaking it up into small pieces. These can be used as alternative raw materials to work with low-strength concrete or in floors.

"This concept can eliminate a lot of concrete that is returning to our plants and this project is allowing more than 80% of retuning concrete to be eliminated this year," said Mr Nantapong.

Another way to turn waste into raw material is to use leftover pilings and crush them into aggregate which can later return to a construction site as raw material for temporary roads. 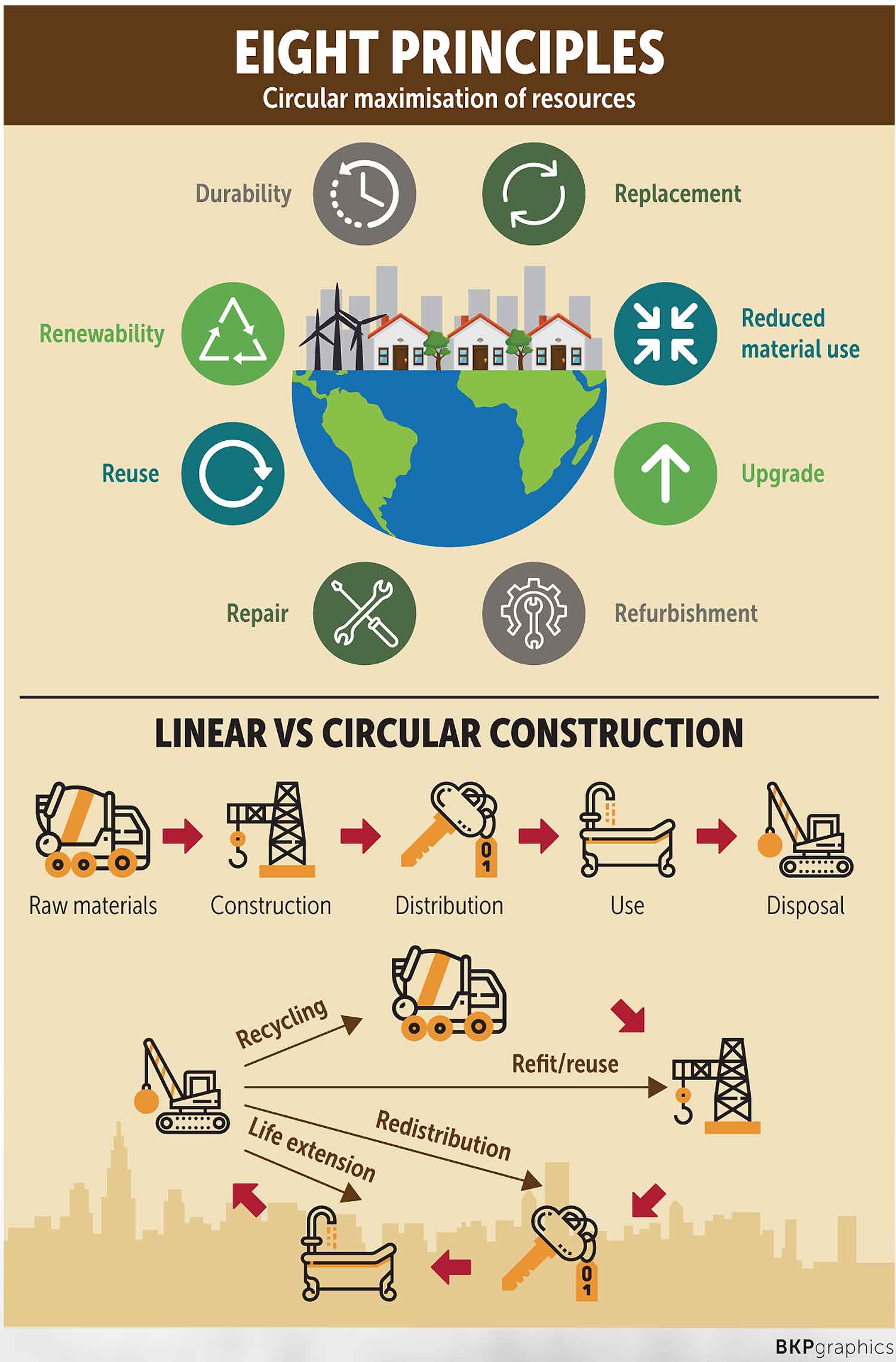 Circular construction concepts in Europe focus on co-processing of waste in cement manufacturing, according to Benjamin Sporton, CEO of the Global Cement and Concrete Association.

Collaboration across industries is the key to scale up the collective effort to promote circular construction. This includes working closely with governments, especially municipal authorities, because they are the ones that are managing waste, he said.

"They can put in place a system to reduce waste going to landfills and deploy it into a cement manufacturing plant, for example," he told Asia Focus.

Landfill taxes could be very effective in discouraging people from putting waste into landfills and instead putting it to more productive uses, something that is happening in Europe now.

Graham Houlder, project coordinator at the Circular Economy for Flexible Packaging, agrees that landfills have to be priced in a way that ultimately discourages people from using them.

"The key thing here is to design a system so that we can get the necessary investment by the private sector in sorting, collection and recycling because people can make some good money out of that. But, it has to be a sustainable business because if it is not, it won't happen."

He believes that the private sectors in Europe and Asia are "absolutely" ready to embrace the circular economy as a whole, as it is something that cannot be easily done in isolation or by individual firms, as they risk losing competitiveness.

"If the whole value chain moves and incurs the same costs, which does not incur comparative disadvantage in the process, we can do it," he said. "On that basis, most of the big brand owners and most retailers would step forward and say, 'We would do this together', by recognising that over the next two to three years we will price in the full cost of getting these materials back."

Dr Phongthon also emphasised that besides producers, end-users have to be more aware of the circular economy. Growing interest in reducing the use of plastics and single-use items such as drinking straws is a promising first step toward completing the whole loop.

"The key to success is communication. There must be a way to team up with customers, while producers have to concentrate on procurement which is something that is not happening in Thailand and most of Asean yet," he said.

For example, he said, Asia could emulate the Green Public Procurement (GPP) program in the EU. Public authorities are major consumers in Europe, and by using their purchasing power to specify environmentally friendly goods, services and work practices, they can make an important contribution to sustainable consumption and production.

To be effective, GPP requires the clear and verifiable environmental criteria for products and services in the public procurement process. The European Commission and a number of European countries have developed guidance in this area, in the form of national GPP criteria.

"After GPP, they have extended further to Sustainable Public Procurement and these are examples where governments can help support the circular economy," said Dr Phongthon. "Without public policy, the people who are doing good will lose their competitiveness from increasing costs. So for this to work, everyone has to do it. We need a standard here."

To further strengthen good governance in procurement, technology such as blockchain can also be used to make sure that public-sector purchasers know where companies are getting their materials from, he added.

JAKARTA: Indonesia will no longer require people to mask up outdoors, its president said on Tuesday, as Covid-19 infections decline in the Southeast Asian country.