Organisation pegs growth at below 3%

Thailand's GDP growth is expected to be below 3% this year and next, with flagging exports, shrinking farm income and lower Chinese tourist arrivals the main drags on growth momentum, the World Bank says. 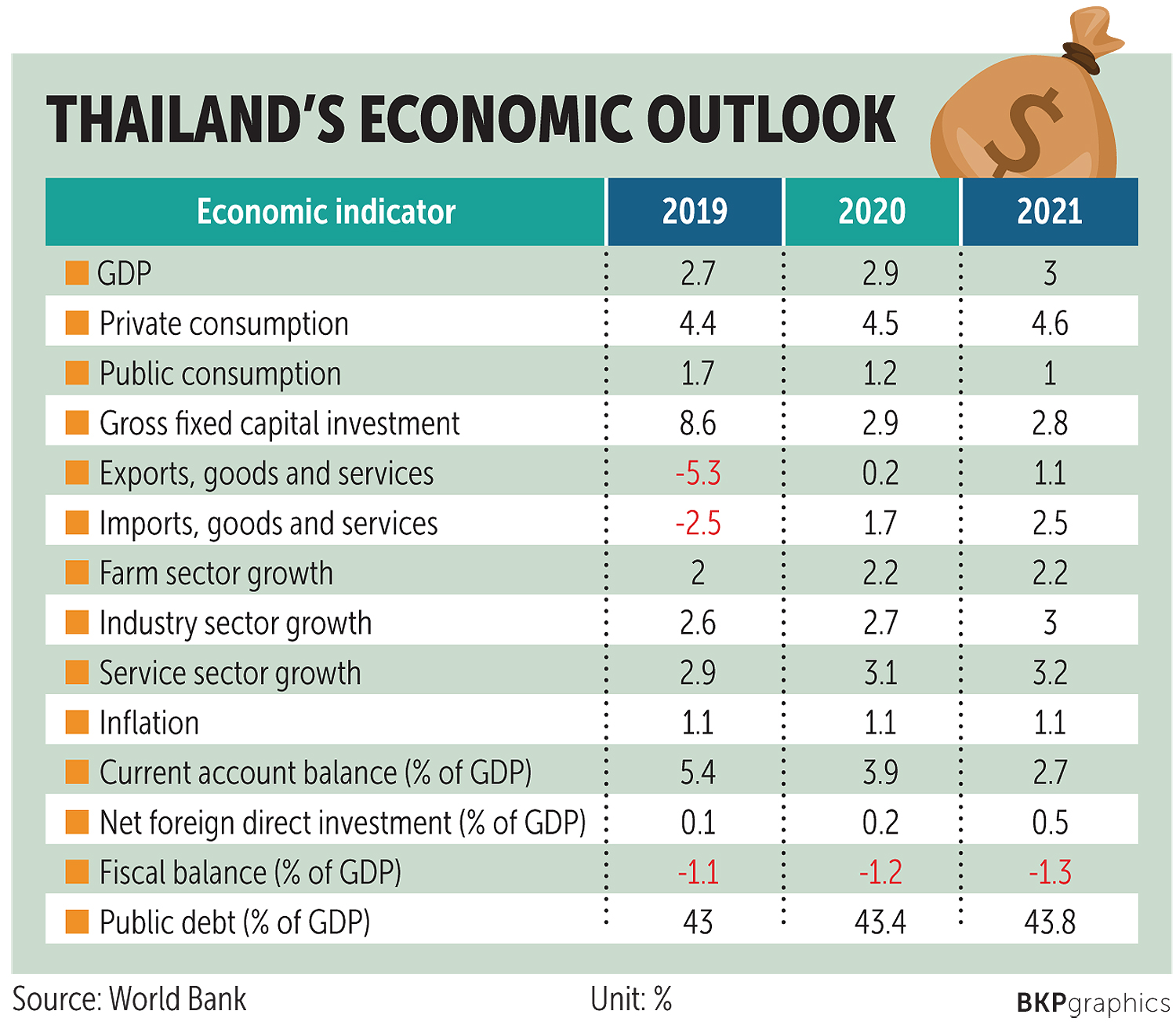 The global lender is the latest organisation to lower its 2019 economic growth forecast for Thailand after recent downgrades by the Bank of Thailand (2.8%), the National Economic and Social Development Council (2.7-3.2%) and the Asian Development Bank (3%).

Southeast Asia's second-largest economy is forecast to expand by 2.7% this year, marred by a decline in exports, a dip in Chinese tourists and ebbing farm income amid drought, the World Bank said in its latest East Asia-Pacific Economic Update titled "Weathering Growing Risks".

Thai GDP grew 2.3% year-on-year in the three months to June after first-quarter growth of 2.8%.

Andrew Mason, lead economist for East Asia and the Pacific, said this year's growth forecast has been downgraded from 3.5% for several reasons, notably a larger-than-expected decline in first-half exports, the worst drought in a decade hitting farm income and the low disbursement rate of capital budget continuing to be a drag on public investment.

He said the government's fiscal stimulus package, announced in August, is unlikely to have a significant impact on economic growth in 2019.

"In the medium term, the impact will depend on the strength of the fiscal multiplier," Mr Mason said.

The government's non-fiscal policy platform that focuses on competitiveness, spatial development and overall continuity in major policies and projects, such as the Eastern Economic Corridor, will help private consumption and investment to pick up and drive medium-term growth, he said.

Such policies will act to reinforce an anticipated pickup in public investment, with the implementation of large public infrastructure projects as the main catalyst, Mr Mason said.

Risks and challenges for Thailand's economic growth prospects are political uncertainty inducing doubts about the cohesiveness of the newly established 19-party coalition government, potential delays in the implementation of large planned public infrastructure projects, weakening domestic demand and escalating trade tensions between the US and China, which could further weaken demand for Thai exports and discourage private investment, especially in export-oriented industries.

Further local currency appreciation could also impede Thailand's export competitiveness with regard to both manufacturing and tourism, Mr Mason said.

The baht was the best-performing currency in the region as of mid-2019 as foreign investors sought refuge in Thai bonds.