As LNG gains in global importance, Thailand is trying to open up its trade

Liquefied natural gas (LNG) is the only natural gas that can be transported by petroleum vessels, as other types require a pipeline.

As LNG becomes an important fuel worldwide, with import and export levels rising, Thailand is trying to open up its LNG trade. Up until now, imports and exports had to be approved and ordered by the country's energy policymakers.

PTT Plc, the national oil and gas conglomerate, has been the sole LNG operator since 2011. It runs the LNG receiving terminal in Map Ta Phut, Rayong with a capacity of 11.5 million tonnes a year.

PTT is developing another receiving terminal in Nong Fab, Rayong, with an annual capacity of 7.5 million tonnes.

LNG has become a hot topic because the government decided to put off a procurement auction of 1.5 million tonnes, managed by the state-run Electricity Generating Authority of Thailand (Egat). The move came as an eight-year contract was about to be signed by Egat and Malaysia's Petronas LNG, the winning bidder.

Policymakers have wanted to liberalise the country's LNG market since mid-2017 by assigning Egat as another LNG shipper.

The government also wants third parties to be able to access LNG facilities in Rayong, such as receiving terminals and the regasification process.

Where it all began

If Egat bought another 1.5 million tonnes from Petronas, the massive volume of LNG would result in a financial burden for Egat, creating a "take or pay" situation.

It means Egat would have to pay for the entire LNG volume under the contracts, though Egat cannot use the massive volume for the power generation system.

Moreover, the policy to liberalise the LNG market was initiated in 2014, when there were limited gas-fired power plants in the country with a combined power generation of 800-900 megawatts.

Meanwhile, the government has granted licences to many companies to operate gas-fired power plants under an independent power supply (IPS) programme. As of June, IPS projects had a total power capacity of 8,000MW. 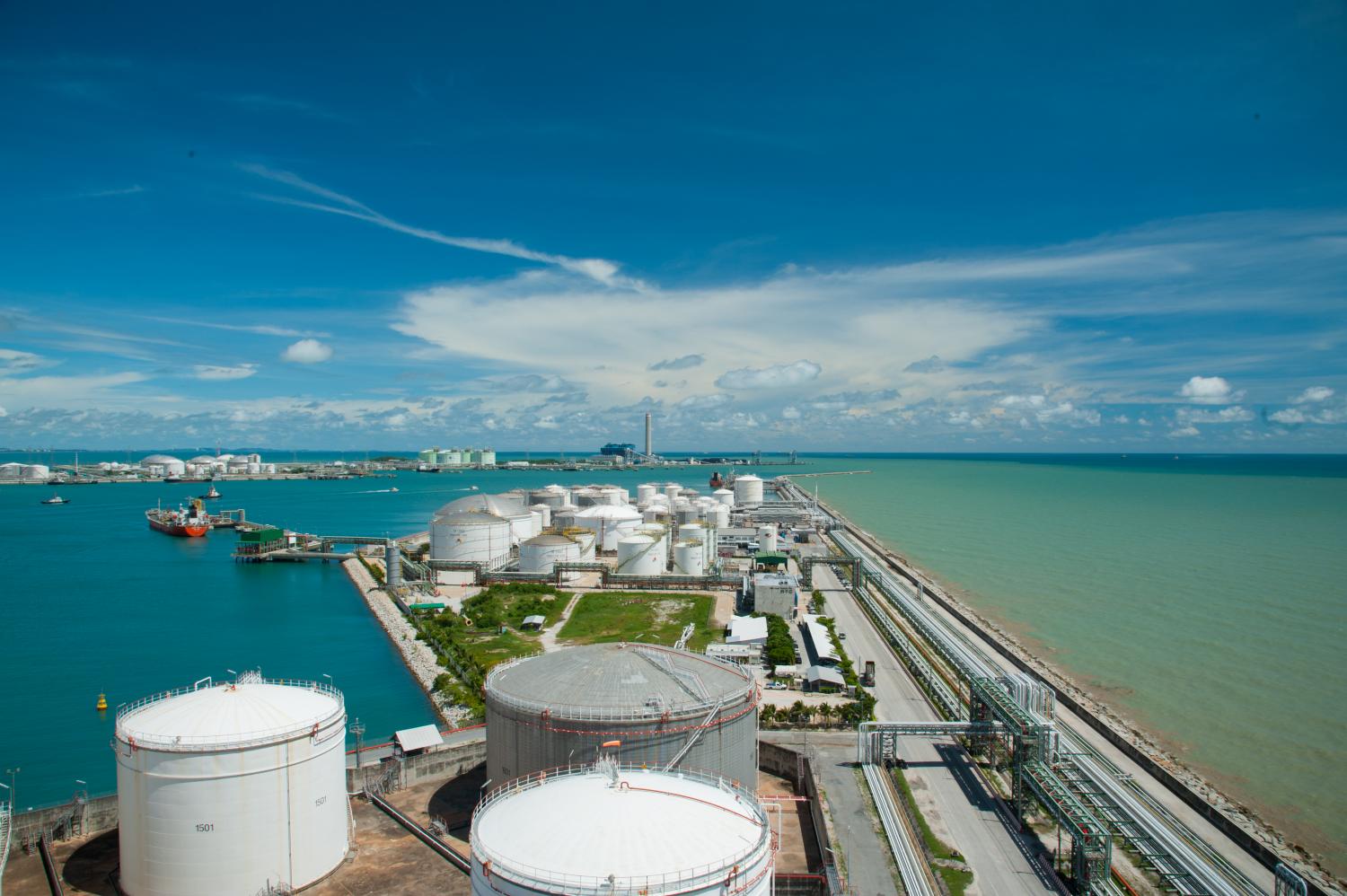 A bird's-eye view of Map Ta Phut port. It is the import-export hub for petroleum and petrochemical products for Thailand.

Energy Minister Sontirat Sontijirawong said the LNG situation has already changed, and that is why the Energy Policy Administration Committee (Epac) agreed to cancel the eight-year purchasing contract.

"The contract was designed from past figures of gas demand and supply," he said.

On the contrary, Epac has assigned Egat to carry out the LNG import plan from spot markets globally. Mr Sontirat said the LNG prices in those markets stand at US$4 per million British thermal units, compared with $7.5-7.7 per million BTU under Egat's eight-year contract.

Kulit Sombatsiri, the ministry's permanent secretary, said Egat plans to purchase 140,000 tonnes of LNG in spot markets for two shipments, intended for Egat's gas-fired power plants in the near future.

Egat has invited 40 LNG producers and traders in the spot markets to the auction.

"All 40 companies are going to qualify for this auction, and the shortlist will be announced some time this month," Mr Kulit said. "Egat's board of directors will screen and select the winning bidders in November."

He said Egat plans to purchase two shipments of 70,000 tonnes each, with delivery expected by December.

These shipments are to be Egat's practice as an LNG shipper.

Mr Sontirat insisted that Egat and Petronas have yet to sign the purchasing agreement, so Epac's decision will not damage either party.

"The global LNG market has also changed, particularly regarding prices in the spot market," he said. "They used to rise and fall sharply due to the fluctuations of new LNG supply."

Sirichai Maingam, chairman of the labour union of the Electricity Generating Authority of Thailand, said Epac should reconsider the resolution to postpone Egat's import plan for the country's power generation.

The labour union has opposed the latest ruling, he said.

"The changed policy means the government lacks consistency and transparency. Egat will suffer from this resolution," Mr Sirichai said. "Moreover, this move will negatively impact bilateral relations with Malaysia, as Petronas is Malaysia's national oil company."

He said Petronas offered a lower price than other bidders, including PTT.

"There is no reason to put off the plan, because the low price of LNG means Thais will benefit from lower power tariffs," Mr Sirichai said. "We question why the government does not open the LNG market to free competition. The LNG price in Thailand would be lower than what PTT is charging, as LNG producers lock in higher prices in their long-term purchase contracts with PTT."

He said that while the spot prices are very low, the global LNG situation can change fast, like the crude oil market.

Mr Sirichai said many energy research houses also forecast LNG demand to exceed supply in the next five years and the prices will also rise, so it will impact consumers.

"They cannot guarantee that spot prices will stay lower than the long-term contract, so the cancellation will mean we lose the chance to buy at a low price," he said.

A source from the energy sector said gas demand in Thailand has been sluggish for the past three years, which is why the government is concerned about the 1.5-million-tonne gas import.

"The country's economy is slowing down, so gas demand is expected to stay flat while IPS projects are gradually increasing, as well as the advent of renewable power projects," the source said.

Thailand's power generation is dominated by natural gas (58%), while other fuels include coal (17%), renewable resources (13%) and oil (1%). The rest is imported from Laos.

The source said Thailand has failed to diversify its fuel mix for power generation by focusing on clean coal and nuclear power over the last 20 years, but natural gas dominates the system.

The government has prepared for more than five years to create new players in the country's LNG market, apart from PTT. This preparation will support the future depletion of natural gas resources in the Gulf of Thailand. LNG will be the future fuel to be replaced.

The ministry has selected Mr Kulit to be the board chairman of Egat. The move will be proposed to the cabinet tomorrow for approval, according to Mr Sontirat.

The new Egat chairman will carry out the planned revision of the Egat Act of 1968 to allow Egat to re-export and sell LNG. The law allows Egat only to import to feed gas-fired power plants.

"The act cannot proceed without the chairman, who will make a decision," Mr Sontirat said. "The ministry will use all it capabilities to overcome these obstacles to lift up the country's LNG market, as Thailand is now ready with gas infrastructure, human resources, knowledge and supply chains."

Moreover, many agencies will work together to liberalise the LNG market by easing any regulations to facilitate the future trading business with both long-term contracts and purchasing orders in spot markets.

Mr Kulit said the law will be amended in 2020 to allow Egat to trade LNG.

Manoon Siriwan, an energy expert, said revision of the Egat Act is the right solution amid the fast-changing situation in the gas market.

"Opening up for new gas players to enter the LNG supply chain will benefit all stakeholders," Mr Manoon said.

Patana Sangsriroujana, Egat's deputy governor for policy and planning, said the authority can reduce the volume of gas purchases under the dropped agreement because each shipment allows from 800,000 to 1.5 million tonnes.

"The 'take or pay' issue can be avoided by reducing the shipment volume," he said. "There is no worry."

Preeyanart Soontornwata, president of B.Grimm Power Plc, said the company wanted to participate in the LNG trade business after the third-party access method was introduced five years ago.

But B.Grimm looked to Vietnam instead for its future LNG trade operations, she said.

"B.Grimm is studying the feasibility of gas business in Vietnam, and the conclusion will be reached in 2020," Ms Preeyanart said.

Gulf has a 70% stake in Gulf MTP LNG Terminal, while PTT owns the remainder.

The third-phase seaport in Rayong is planned to be the LNG shipment hub in Southeast Asia. The Industrial Estate Authority of Thailand is the seaport's owner.

This development project is also the latest movement in the third-party access method for the utilisation of LNG facilities in Rayong.

LNG shipment and storage at the receiving terminal will surge from just 5 million tonnes to 10.8 million under the 30-year operation.