The NBTC says the broadcasting business has rapidly changed amid digital disruption from over-the-top platforms. (Photo by Seksan Rojjanametakun)

The remaining 15 digital TV channels breathed a sigh of relief after their costs were hugely subsidised by the state following a Section 44 order in April, but their future remains uncertain as new technology lets viewers watch content via other platforms beyond traditional TV.

Seven digital TV channels have exited the industry and received state assistance in line with Section 44. They received combined compensation of 2.7 billion baht.

The 15 surviving channels enjoy a waiver of remaining licence payments, the rental fee for broadcasting networks (MUX) and the cost of the must-carry rule throughout the remainder of their TV business licences.

In terms of ad spending, media veterans believe that only five or six channels will be able to stay in business because they have ratings high enough to justify sufficient ad rates. 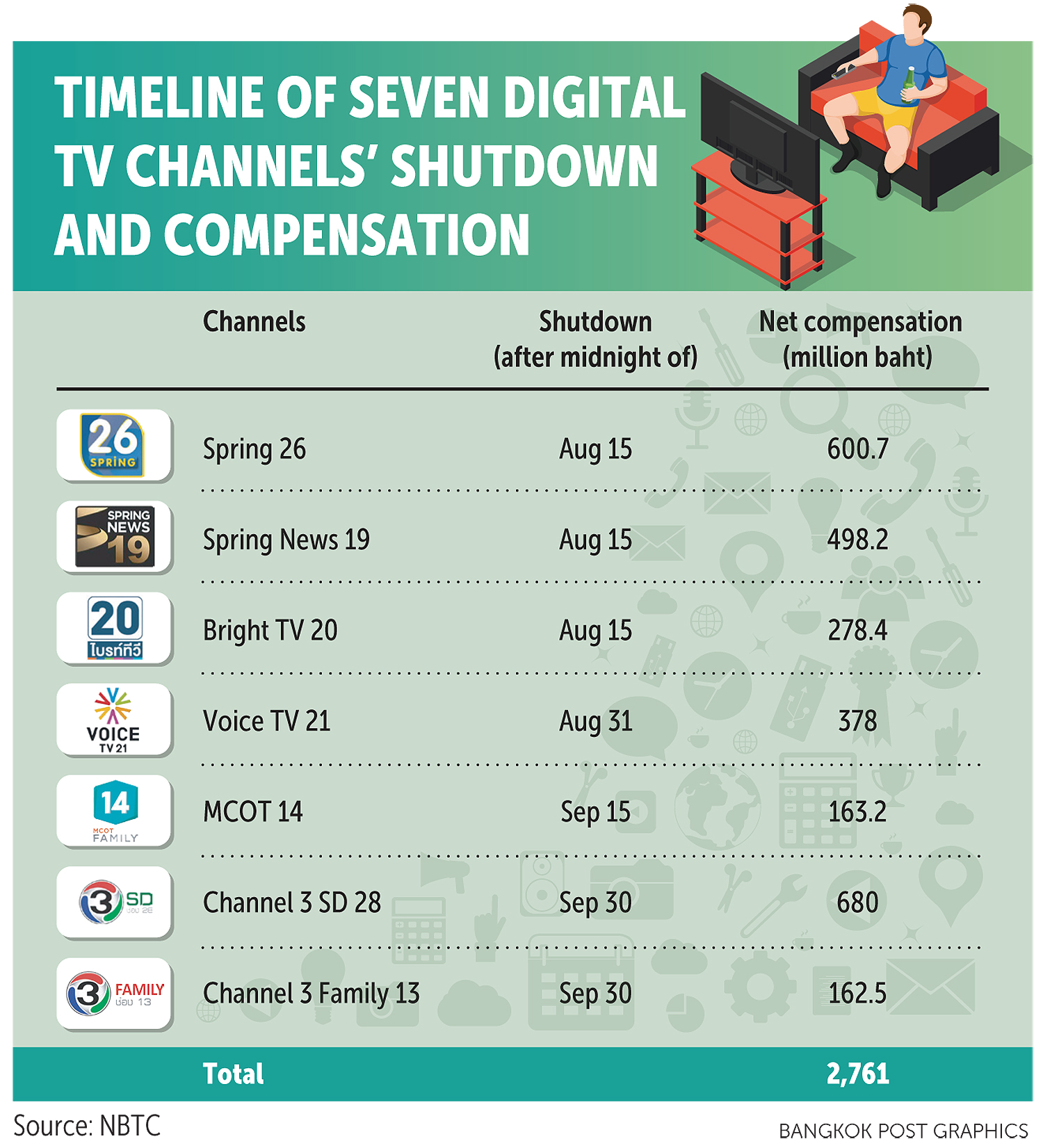 Less popular channels may be able to survive in light of the fee waivers, but rapid changes in customer behaviour, the emergence of new media platforms and a weak economy could affect ad spending on TV channels, analysts say.

Takorn Tantasith, secretary-general of the National Broadcasting and Telecommunications Commission (NBTC), said the agency has assisted digital TV channels three times since 2016, including the latest aid package in April.

"The remaining 15 channels now have to cope with industry challenges, as they cannot hope for more assistance," Mr Takorn said. "They must reorganise and adjust their business models to ensure sustainable revenue throughout the remainder of their licences."

If they cannot operate a business in the future, they can return their licences to the NBTC and exit the sector whenever they want, he said.

These operators will not receive compensation from the regulator because assistance based on Section 44 has now ended.

"They can return their licences and quit the business without any financial penalties," Mr Takorn said.

The digital TV licence auction in 2013 with a combined winning price of 51 billion has been criticised as a failure because several TV stations struggled to operate.

Mr Takorn said the industry has been disrupted by technology in many countries, and some other governments also assisted operators.

"The disruption is driven by over-the-top [OTT] platforms," he said.

No one appeared to acknowledge the trend when the auction was held, Mr Takorn said.

Viewer behaviour has changed, with content consumed via online platforms such as YouTube, Facebook and Netflix, which is taking a toll on TV operators' old business models, he said.

5G or enhanced mobile broadband will also give consumers easier and faster access to innovative platforms.

AR/VR will deliver an immersive experience to consumers, surrounding their senses as though they were inside it, part of a mixed-reality platform.

Although some digital TV channels are embarking on digital innovations, such as virtual studios and airing content via an omni-channel approach, Mr Supot said this may not be enough.

"The core asset of the media from now is to provide more original quality content," he said.

Mr Supot suggested the regulator seek ways to reduce some fixed operating costs for TV channels in order to free up money for them to produce quality content.

Triluj Navamarat, president of the Media Agency Association of Thailand, said the closure of seven TV digital channels is unlikely to spark competition among the remaining 15 to lure ad spending. This is because ad spending is mostly clustered in the seven channels that have strong ratings, particularly the top four.

Those that exited the industry gained less than 10% of the total ad spending on digital TV, Mr Triluj said.

"The most important point is to make good content that will attract advertising," he said.

The survival of TV channels rests with their niche programming, which can target audience groups.

Imminent 5G technology will be a boon for immersive content to bring new experiences to users, but this content also requires investment, Mr Triluj said.

In addition, TV ratings must take into account both conventional and online broadcasting and must be conducted by trusted and neutral parties, he said.

"It is not an easy time to survive business amid unpredictable factors, such as innovative platforms and consumer behaviour," Mr Pisut said.

Additionally, ad spending by companies will be influenced by domestic and global economic factors.

"Several channels that have strong capital backing from their owners or parent companies, such as TNN and PPTV, have an advantage over others that do not," Mr Pisut said.

TV operators need to figure out business models that fit their real fans and can cope with the challenges, he said.

The "super prime time" for TV viewership is 5-10pm, as people are drawn to other platforms during other time slots, Mr Pisut said.

Many people watch TV shows via online platforms, while the old rating focuses mainly on the terrestrial system, he said.

The NBTC has made clear it wants to combine TV viewing via all platforms in the new system, including terrestrial digital TV, satellite TV and over-the-top platforms, showing the results in real time.

The commission issued its rule governing the process of seeking a body to run TV viewership ratings on May 23. But the rule came under criticism because it was blamed for favouring a particular ratings organisation.

The NBTC's rule said the receiver of the budget for handling the TV ratings system must be an organisation that gathers members of licensed digital TV operators.

One of the rule's conditions said the organisation must be a juristic person that was registered at least three years before the rule was enforced. The only organisation that meets this standard is the Association of Digital TV Operators.

In September, the NBTC amended the rule to omit the clause with the three-years stipulation.