Eleven SET-listed commercial banks posted a 1.81% year-on-year increase in consolidated unreviewed net profit for the three months through September, while most of them continued to see an uptick in bad loans. 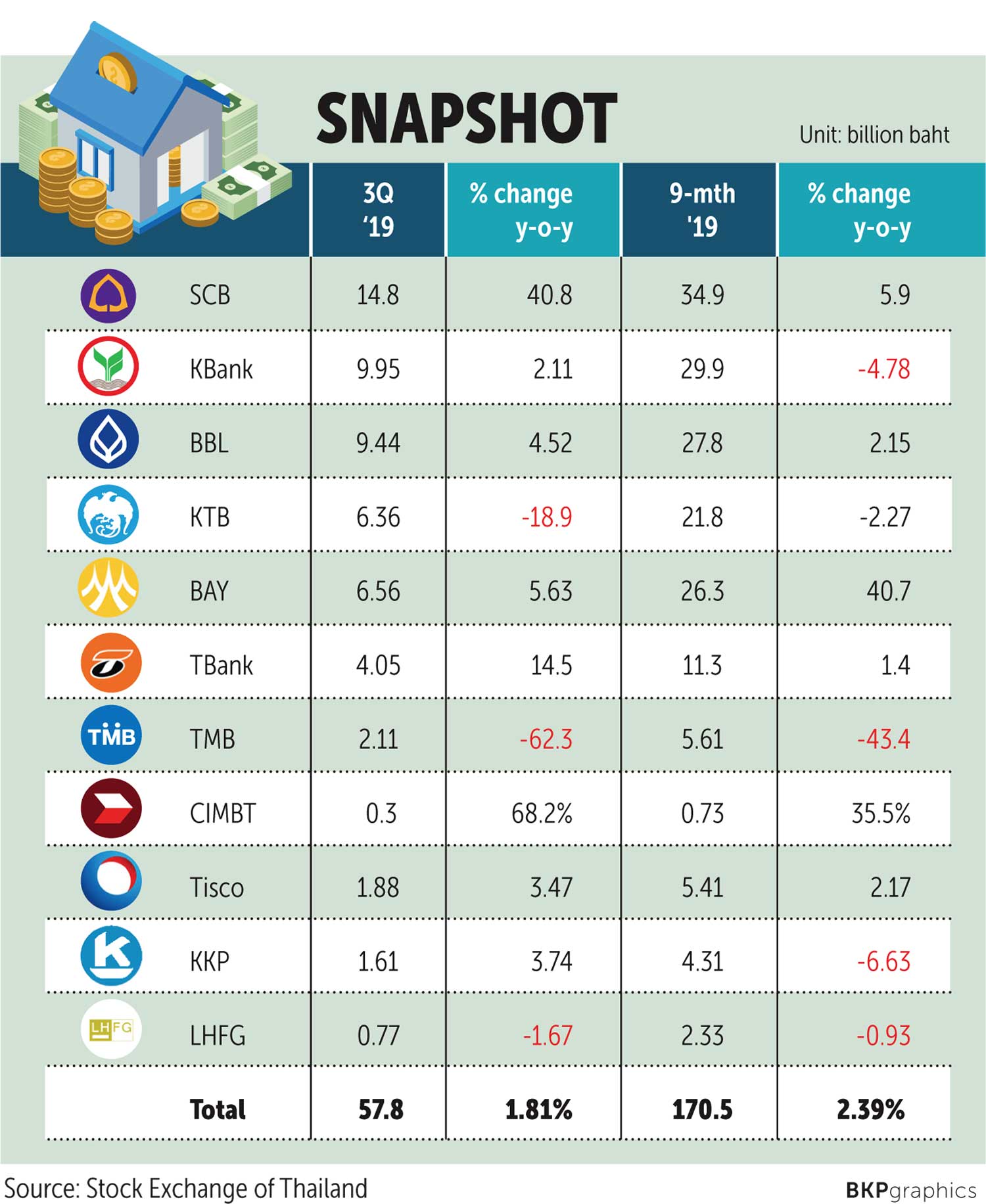 Their aggregate net profit for the July-to-September quarter amounted to 57.8 billion baht.

Siam Commercial Bank (SCB) delivered a 40.8% surge in its third-quarter net profit from a year earlier to 14.8 billion baht, largely thanks to a 11.6-billion-baht one-off gain from selling SCB Life Assurance to FWD Group Financial Services.

The bank's net interest income rose 7.4% over the same period last year to 26.2 billion baht in the third quarter and its non-interest income soared 232% to 34.3 billion, according to a filing with the Stock Exchange of Thailand (SET).

SCB set aside an impairment charge for credit losses in the third quarter of 15.3 billion baht, almost triple the previous year's figure, aimed at providing a buffer amid greater uncertainties.

For the nine-month period, net profit increased 5.9% from a year before to 34.9 billion baht.

The country's largest lender by assets saw a higher gross non-performing loan (NPL) ratio at 3.01% for the end of September from 2.85% at the end of last year.

The bank recorded higher net interest income and non-interest income for the third quarter, but a 22.5% increase in the loan-loss provision to 10 billion baht for the period narrowed the bottom line's growth.

KBank's net interest income rose to 26.1 billion baht for the three months to September from 25 billion a year earlier and non-interest income jumped to 15.8 billion from 13.1 billion.

Between January and September, net profit fell 4.78% from a year earlier to 29.9 billion baht.

Bangkok Bank delivered a 4.5% rise in quarterly net profit to 9.44 billion baht as a 9.6% increase in net fee and service income fully cancelled out the impact of a 1.7% decline in net interest income.

At the other end of the scale, TMB Bank was the worst performer in the third quarter. Quarterly net profit slumped 62.3% from a year ago to 2.11 billion baht.

The sharp drop in net profit could be attributed to a 69% plunge in non-interest income to 4.49 billion baht.

The bank's loan-loss provision for the third quarter tumbled 69.2% over the same period last year to 2.89 billion baht.

TMB's net profit for the first nine months also plummeted by 43.4% from a year before to 5.61 billion baht.

The country's fourth largest lender by assets posted net interest income of 21.2 billion baht, up 1.3% from the corresponding period a year before, and net fee and service income rose 5.1% year-on-year to 5.95 billion.

Impairment costs for credit loss was a tad lower at 6.1 billion baht in the third quarter from 6.08 billion a year ago.

For the first nine months, KTB reported a net profit of 21.8 billion baht, compared with 22.3 billion a year earlier.