Move will have little impact on exports

The latest move by the US to suspend benefits under the Generalized System of Preferences (GSP) for Thailand, which comes into effect in six months, is not expected to affect local exporters much, but further trade protectionism by Washington may be on the horizon, say analysts.

The US said last Friday it will suspend US$1.3 billion (39.2 billion baht) of GSP benefits, and Thai seafood products will be removed from the scheme.

Set to take effect on April 25, 2020, the suspensions cover a total of 573 types of goods that the Commerce Ministry's Trade Policy and Strategy Office said will face a higher import tariff of 4.5%, leading to US-bound exports dropping to an estimated $28.8-32.8 million next year, or 0.01% of overall exports.

It said the steps were triggered by concerns about workers' rights, although some suspect the suspension could stem from US concerns about its soaring trade deficit with Thailand, the country's ban on ractopamine -- a feed additive commonly used by US pork producers -- and most recently, the ban on glyphosate.

Independent academic Somjai Phagaphasvivat said losses stemming from foregone GSP benefits are insignificant, but the move has caused a shock among local exporters as they are reeling from the domestic economic downturn and baht appreciation.

US President Donald Trump has a zero-sum outlook in dealing with other countries, said Mr Somjai, citing the US's perceived dominance in a recent trade deal with Japan as an example.

Although the initial estimate suggests a minuscule impact on Thai exports, it could pave the way for greater geopolitical risks between Thailand and the US in the future, said Trinity Securities executive director Nuttachart Mekmasin.

A negative effect on Thailand's stock market is assessed to be limited since SET-listed companies are not associated with risks of GSP-suspended goods, Yuanta Securities said in a research note.

The move by the US is expected to put pressure on the Thai government and exporters going forward because Thai shipments going to Washington during the first nine months had a value of $23.6 billion, higher than exports going to China worth $2.13 billion in the same period, said Yuanta Securities.

"If the US imposes additional trade restrictions or sanctions under conditions where the US assesses that its business operators are facing trade restrictions from Thailand, this could have a significant implication on exports," said Yuanta Securities.

Relying less on exporting to the US market through diversifying shipments to other markets is an ideal approach, but Thailand's lower competitiveness evaluated by the World Economic Forum, the strengthening baht and no progress in the free trade talks with the EU are impeding the country's trade structure to rely less on the US market, said Yuanta Securities.

"Although the impact on Thai exports is estimated at 0.01% of total exports, the fragile economic conditions could prompt the government to roll out additional stimulus measures along with deliberation of lower interest rates by the Bank of Thailand's Monetary Policy Committee," said Asia Plus Securities in its research note.

But losing the GSP tariff privileges is not anticipated to have a huge impact on SET-listed companies, said ASP analyst Anakepong Putthapibal.

This is because major Thai agro-industrial food and seafood conglomerates, such as Thai Union Group Plc (TU) and Charoen Pokphand Foods Plc (CPF), do not receive any GSP privileges for exporting shrimps, tuna and animal feed, said Mr Anakepong.

Sri Trang Agro-Industry Plc is also unaffected by Washington's move since the company's exports of rubber and rubber gloves are not included in items liable for US import duty, he said.

Thailand lost its GSP tariff privileges with the EU in 2015, but the value of local shipments to the euro zone bloc did not decline, according to ASP. 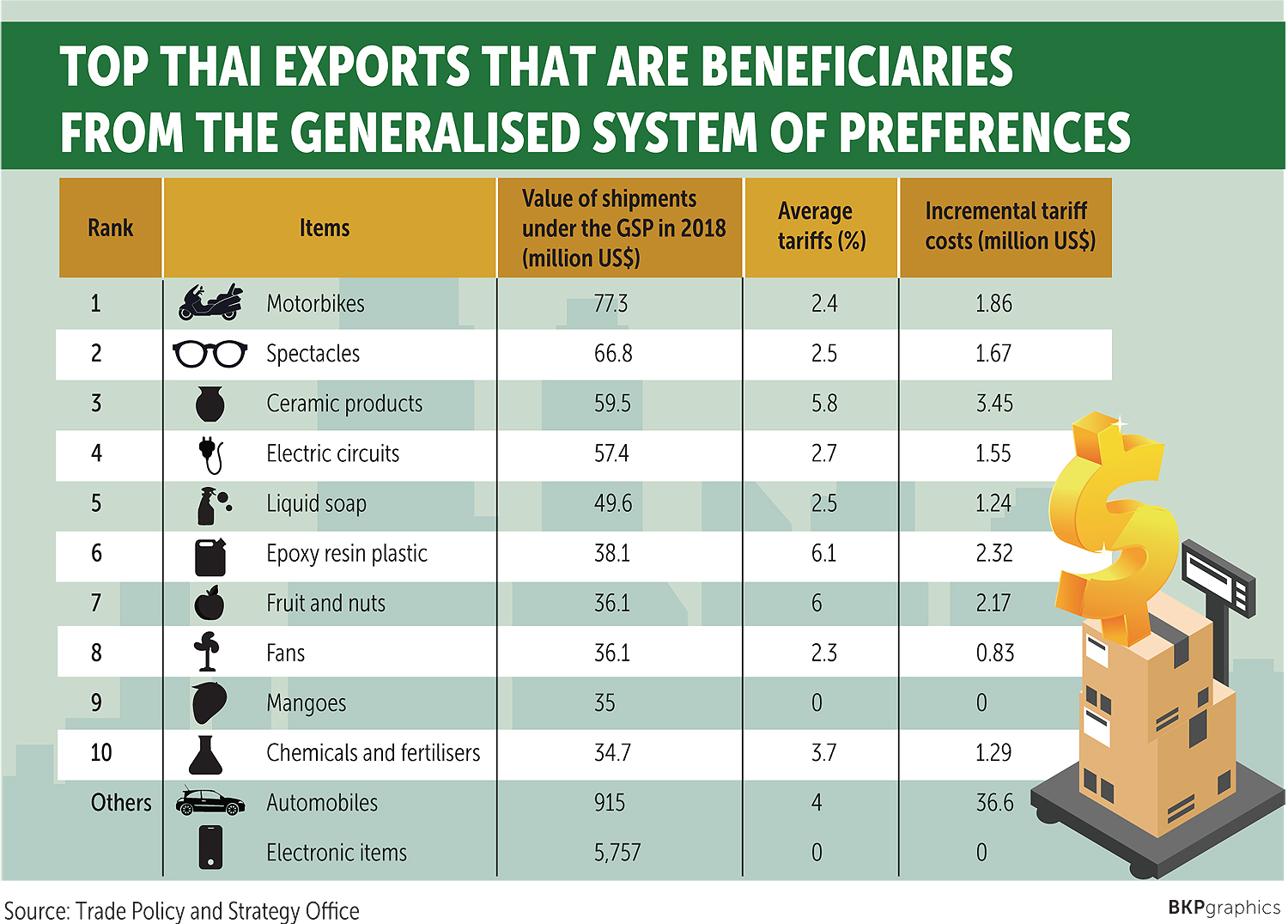 Ghanyapad Tantipipatpong, president of the Thai National Shippers' Council, said it is improper for the US administration to link workers' rights to the GSP issue.

"We have yet to truly understand the criteria the US applies in cutting its GSP on Thai goods," she said.

Normally the cut is based on two criteria -- market share and import value exceeding the limits imposed each year by the US -- and the Thai products subject to the cut do not fall into these criteria, said Ms Ghanyapad.

"The excuses about foreign workers' rights are to put pressure on Thailand to open up pork imports," she said.

The market share condition calls for imported products from the trading partner to not exceed 50% of total imports from the US.

The GSP decision will only affect CPF's export of wonton shrimp noodle soup, which makes up 0.2% of total sales revenue and is subject to a 6% import duty, said chief executive Prasit Boondoungprasert.

The company has adjusted its business by emphasising overseas business expansion through setting up production facilities abroad, said Mr Prasit.

Some 70% of CPF's total sales come from overseas.

"CPF has invested in production of ready-meal foods in the US and the growth rate is as expected, with business expansion opportunity on the horizon," he said.

The US's decision will not have a material impact on TU's business, as no seafood or pet food products sold to the US are currently covered by the GSP, said Thiraphong Chansiri, chief executive of the firm.

Face masks mandatory in Paris as US hits 5m cases

PARIS: Face masks became compulsory in tourist hotspots in Paris on Monday amid warnings of a resurgence of coronavirus cases, as infections in the world's worst-hit country the United States topped 5 million.