The telecom regulator has announced the debut auction of 5G spectrum on Feb 16 for four bands to accelerate availability of the ultra-high-speed wireless technology nationwide. 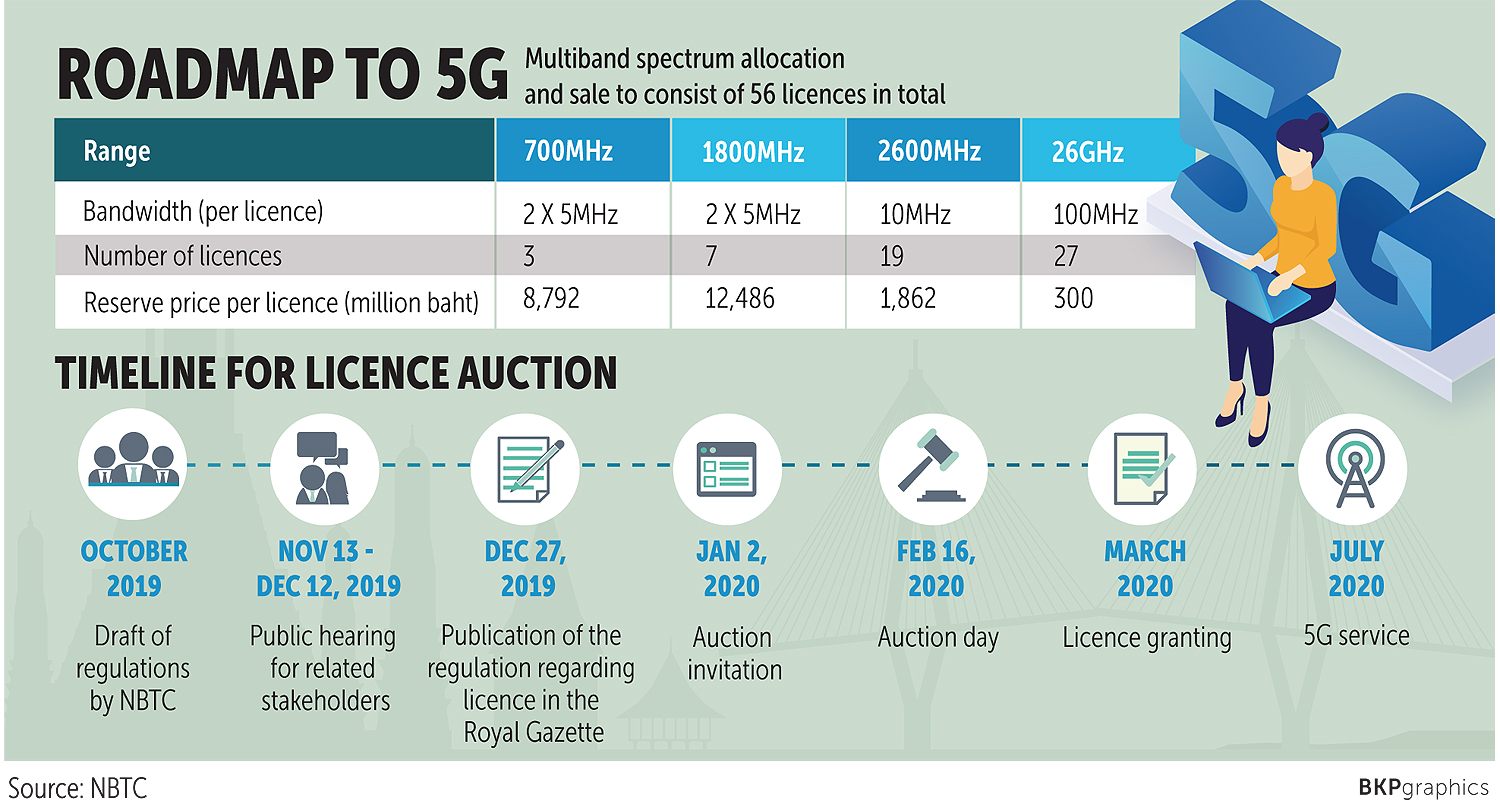 The National Broadcasting and Telecommunications Commission (NBTC) said the ranges most coveted by mobile operators are 2600MHz and 26GHz, as they have been used for 5G technology globally.

The 2600MHz range is divided into 19 licences, each of which contains 10MHz of bandwidth with a reserve price of 1.86 billion baht. The 19 licences are worth 35.3 billion baht in total.

The 26GHz range is divided into 27 licences, each of which contains 100MHz of bandwidth with a reserve price of 300 million baht. The 27 licences are worth 8.1 billion baht in total.

The 700MHz range is divided into three licences, each containing 5MHz of bandwidth, with a reserve price of 8.7 billion baht.

The 1800MHz range is to have seven licences, each containing 5MHz, with a reserve price of 12.4 billion baht.

The reserve prices of the 700MHz and 1800MHz ranges are based on the winning prices of previous auctions.

Takorn Tantasith, secretary-general of the NBTC, said the regulator targets 43 billion baht in earnings from the upcoming auctions on the 2600MHz and 26GHz ranges.

He acknowledged that the 700MHz and 1800MHz ranges may not be attractive to major operators.

Mr Takorn said the reserve price of the 2600MHz range is based on a study by Chulalongkorn University, Chiang Mai University and the Thailand Development Research Institute, while the price of the 26GHz range comes from Chalmers University of Technology in Sweden.

Regarding the payment terms, 10% of the winning price per licence must be paid within the first year after the licence is obtained.

A grace period for payment will then be given to the operators from the second year to the fourth year.

From the fifth to 10th years, an annual instalment payment of 15% of the remaining licence cost must be made by the operators.

Under this payment incentive, operators must roll out the 5G network in the Eastern Economic Corridor project to cover about 50% of the area within one year of licences being awarded.

The operators are also obliged to bring out the 5G network for 50% of the population in smart city zones within four years.

The licence winners must use the four spectrum ranges only for 5G networks.

"The auction's draft will be submitted to the NBTC's board and is expected to be approved by Nov 12," Mr Takorn said.

Somchai Lertsutiwong, chief executive of Advanced Info Service, said AIS agrees with the government's goal to improve the country's competitiveness through innovations such as 5G tech.

The company is interested in the upcoming 5G spectrum auction, Mr Somchai said, and it wants more spectrum ranges for innovative tech and to retain the leading position in the competitive telecom market.

He reiterated that the most appropriate time for 5G adoption in Thailand is late 2021, as use cases need a period to develop.

Because 5G adoption is on the national agenda, new methods of spectrum allocation must be sought, Mr Somchai said.