As interest rates continue to be low, infrastructure funds remain attractive investment tools, with a 17.9% surge in their aggregrated market capitalisation during the first 10 months this year.

Eight infrastructure funds had a combined market capitalisation of 406 billion baht, up from 345 billion at the end of last year.

Market capitalisation can be used to measure securities performance if these stocks do not raise capital.

The Digital Telecommunications Infrastructure Fund (DIF) was the top performer among its infrastructure fund peers, gaining 36.4% to 189 billion baht at the end of October from 139 billion at the end of last year, according to data compiled by Kasikorn Securities.

The government-backed Thailand Future Fund (TFFIF) was second, with a 26.7% jump during the first 10 months, followed by the Electricity Generating Authority of Thailand Infrastructure Fund (EGATIF) at 19.6%.

Super Energy Power Plant Infrastructure Fund (SUPEREIF), which debuted on Aug 21, saw its market value rise 2.6% to 6.03 billion baht at the end of October from its first day of trade.

These infrastructure funds' returns outpaced the average on the SET index, which advanced 2.4% for the first 10 months.

However, some infrastructure funds have suffered hefty losses.

Amata B. Grimm Power Power Plant Infrastructure Fund (ABPIF) was the worst performer during the 10 months through October, shedding 23.3% in market value to 2.83 billion baht at the end of October from 3.69 billion at the end of 2018. 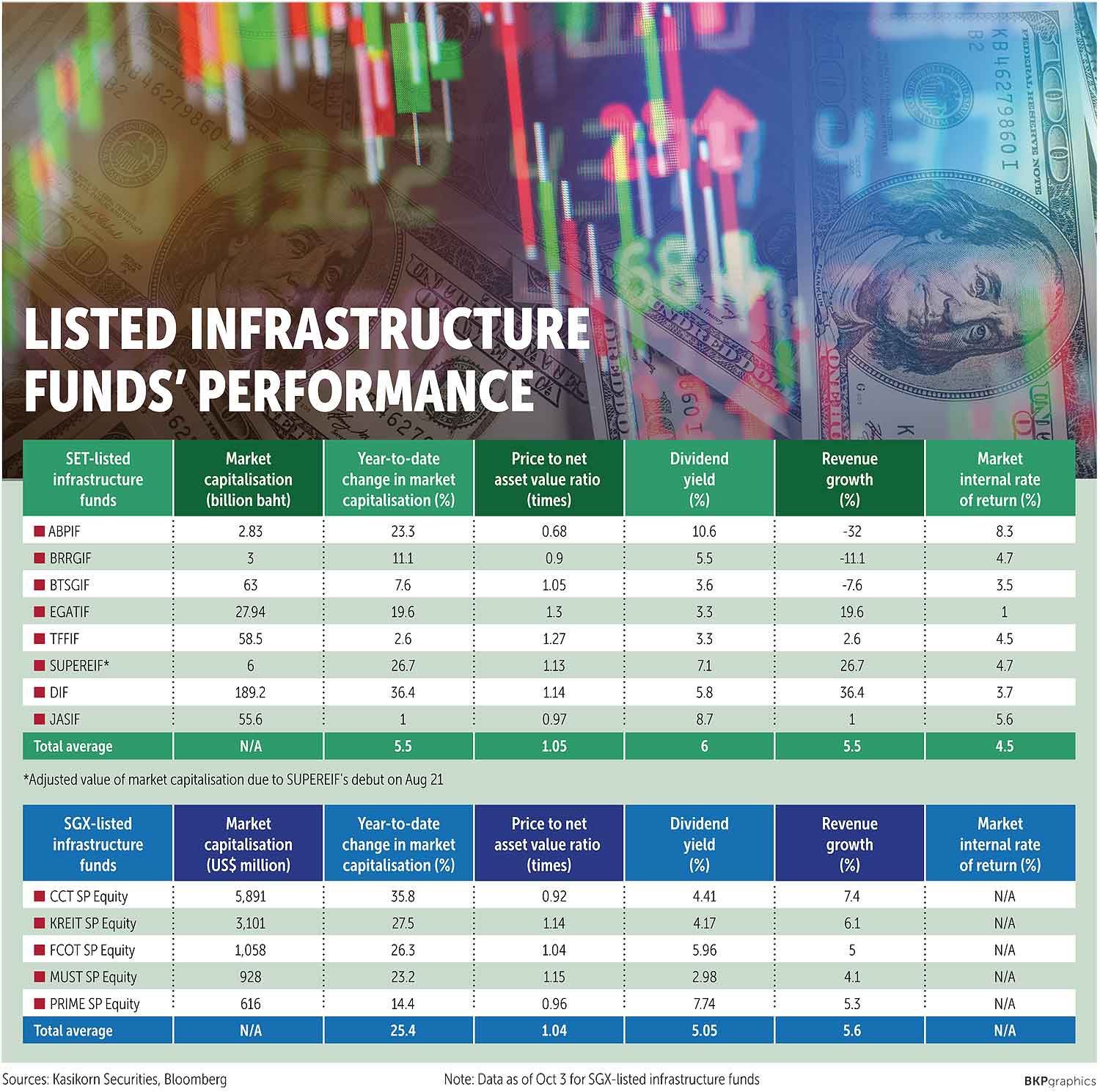 Kasikorn Securities strategist Sunthorn Thongthip said a decline in interest rates and bond yields across the globe coupled with concerns over the global economic slowdown have stoked demand for investment in infrastructure funds and office real estate investment trusts (REITs), which have stable cash flows and consistent cash distribution to investors.

"We believe the low interest trend will continue for some time because of expectations of further monetary easing by key central banks, such as the European Central Bank, the US Federal Reserve and the Bank of Japan," he said.

Investors must consider that their investment value in infrastructure funds may offer lower yields as prices have increased, Mr Win said.

"We advise investors to diversify their investments in these assets," Mr Win said. "There are many choices in Singapore where infrastructure funds are investing in fibre cables and waste-water treatment plants, which offer a 5-7% return depending on asset quality."

Therdsak Taweethiratham, head of research at Asia Plus Securities, said the difference between infrastructure funds, REITs and dividend stocks are how the assets of infrastructure funds are more reliable and do not fluctuate a lot compared to revenue earned from some REITs where the nature of business is cyclical.

For dividend stocks, they could swing depending on economic conditions and are prone to risk if listed companies shoulder high debt burdens, Mr Therdsak said.