The GSP revocation leaves everyone spinning and online forums spewing, while experts try to figure out problems with workers' rights in Thailand and officials look to make headway with US dialogue

The US recently stunned long-time ally Thailand by revoking trade privileges worth US$1.3 billion (39.2 billion baht) under the Generalized System of Preferences (GSP), stirring up anti-American sentiment among locals online after the latest in a string of protectionist trade policies favoured by US President Donald Trump.

The US's rationale for the move was Thailand's failure to adequately protect worker rights.

Set to take effect on April 25, 2020, the suspension covers 573 types of goods, with the Commerce Ministry's Trade Policy and Strategy Office estimating that the goods would face a higher import tariff of 4.5%, leading US-bound exports to drop by an estimated $28.8-32.8 million next year, or 0.01% of overall exports.

The suspension means that the goods will no longer receive duty-free treatment and will face import tariffs of 4-5% or 1.5-1.8 billion baht annually, said Commerce Minister Jurin Laksanawisit.

With exports making up roughly 70% of the country's GDP, losing GSP privileges is bad news for exporters, especially during a time when shipments have been flagging.

The US said the steps were triggered by concerns about workers' rights, although some suspect that the suspension could stem from US concerns about its trade deficit with Thailand, the country's ban on ractopamine -- a feed additive commonly used by US pork producers -- and most recently, the ban on glyphosate, a herbicide.

"The US's GSP suspension is not the end of the world," said Keerati Rushchano, acting director-general of the Foreign Trade Department. "We're still able to export those products, but under the 'most favoured nation' tariff rate that averages 4.5%."

With the US election edging closer, the Trump administration has to use foreign policy to demonstrate achievements, said independent academic Somjai Phagaphasvivat.

The US government's GSP suspension has political implications, as Thailand's decision to ban ractopamine and glyphosate, in addition to its trade deficit with Thailand, could be seen as undermining US shipments, hence the decision to relinquish GSP privileges given to Thailand, Mr Somjai said.

"The US's decision has implicit political implications," he said. "Donald Trump and his advisers are considered neoconservatives and realists who look to capitalise on national interests over supporting other countries."

The US's six-month implementation time frame is seen as a tactic for Thailand to begin bilateral negotiations, akin to the US's strategy of offering a timeline for China to negotiate before imposing punitive import tariffs, he said.

On Friday, Thai trade and labour officials in Washington had talks with the US Trade Representative about the recent decision to end preferential trade privileges for a range of Thai exports.

Thai officials will also attempt to negotiate with their American counterparts during the 35th Asean Summit in Bangkok to persuade Washington to restore GSP benefits given to Thailand.

The US's GSP suspension could also be interpreted as a geopolitical move, pressuring Thailand to edge away from China and closer to the US, Mr Somjai said.

He said Mr Trump has a zero-sum geopolitical outlook in dealing with foreign jurisdictions, even staunch US allies like the EU and Japan.

The government still has six months to hold talks with Washington to resolve the issue, said Kalin Sarasin, chairman of the Thai Chamber of Commerce. The US has turned its attention to its trade deficit with Thailand for some reason, he said.

The US's trade deficit with Thailand stood at $13.2 billion during the first eight months, according to WorldCity Inc. The trade deficit between Thailand and the US reached $19.4 billion in 2018.

When asked whether the GSP suspension is linked to the ban on glyphosate, Mr Kalin said the private sector supports a ban on the three toxic farm chemicals, noting that they have been banned in several countries. 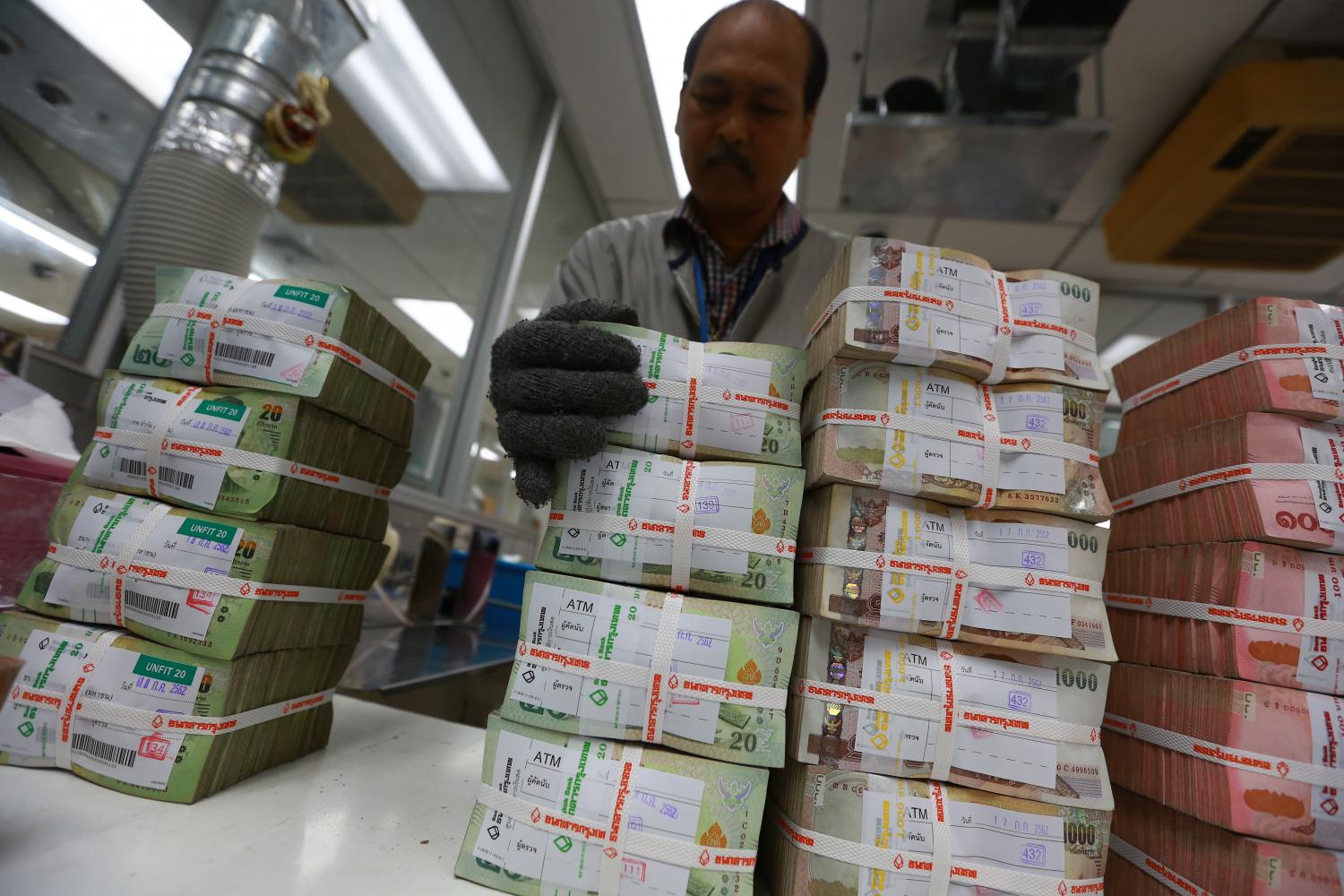 The strengthening baht has drawn the attention of US policymakers.  photos by Somchai Poomlard

The revoked GSP decision is based on a broader complaint filed by the American Federation of Labor and Congress of Industrial Organizations (AFL-CIO), the largest US labour union federation, in 2013 about workers' rights in Thailand.

"The government of Thailand actively retaliates against workers and allows the worst forms of exploitation and abuse, including forced labour, to proliferate throughout its economy," said an AFL-CIO statement issued on Oct 28. "The government severely limits all workers' ability to form and join unions, does not enforce collective bargaining and prevents workers from striking. The meagre protections that do exist are not enforced."

Strictly based on labour issues, the US government's decision to call for greater labour protection in Thailand is reasonable because migrant workers are abused and taken advantage of by companies employing them, said Yongyuth Chalamwong, research director for labour development at the Thailand Development Research Institute.

"Without looking into some hidden agendas, I agree with greater adoptions [for enhancing foreign labour rights] under the condition that this has to only do with labour issues alone," Mr Yongyuth said. "Greater adoption of labour rights conventions will improve the country's image and reduce the trade impact from a loss of GSP privileges by small and medium-sized enterprises."

Thailand has yet to ratify the 87 and 98 conventions of the International Labour Organisation conventions on freedom of association and protection of the right to organise and collective bargaining. 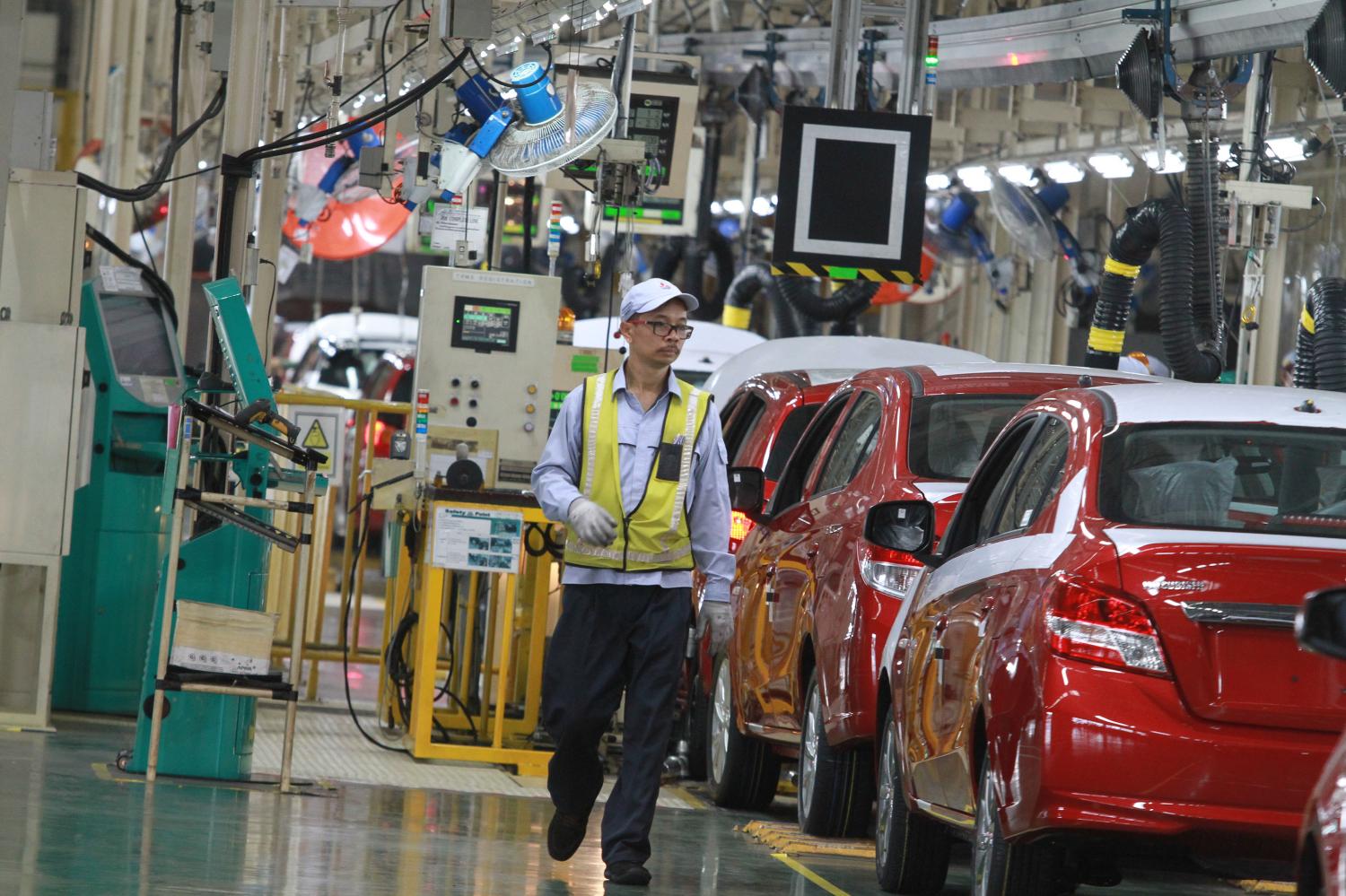 The revoked US GSP privileges will result in import duties of 5-10% on auto parts and tyres, says Tapma.

As one of the private sector's representatives, Ghanyapad Tantipipatpong, chairwoman of the Thai National Shippers' Council, disagrees with the AFL-CIO's call, saying the Thai private sector sees different treatments for Thai and foreign labour and having labour unions separated between domestic and foreign workers as unnecessary.

"The best treatment for foreign labour is systematic care given to them through Thai labour laws," Ms Ghanyapad said. "And it needs to be understood that business operators in Thailand have different and unequal financial capabilities."

Kriangkrai Tiannukul, vice-chairman of the Federation of Thailand Industries, said it is impossible for Thailand to meet US demands, while "the US itself will not allow foreign workers to set up labour unions in its country, as this will affect many dimensions such as politics, economy and sovereignty".

"When the EU cut its trade preferences for Thailand, the bloc cited how we have graduated to becoming stronger economically, but it did not use the excuse of foreign labour unions, unlike the US," Mr Kriangkrai said.

Thailand has 3.2 million registered foreign workers, largely from Myanmar and Cambodia, according to Tanit Sorat, vice-chairman of the Employers' Confederation of Thai Trade and Industry.

There are roughly 37.6 million Thai workers.

The US seems to want to use the labour issue as a pretext to negotiate with Thailand and protect American companies in line with its "America First" policy, he said.

It may not be possible to set up a foreign labour union before the GSP revocation comes into effect, but Thai officials could consider negotiating with US authorities based on mutual trade and investment benefits, Mr Somjai said.

"Thailand does not need to undertake a tit-for-tat strategy," he said. "Reasoning through enhancing bilateral trade and Thai investment in the US is more ideal." 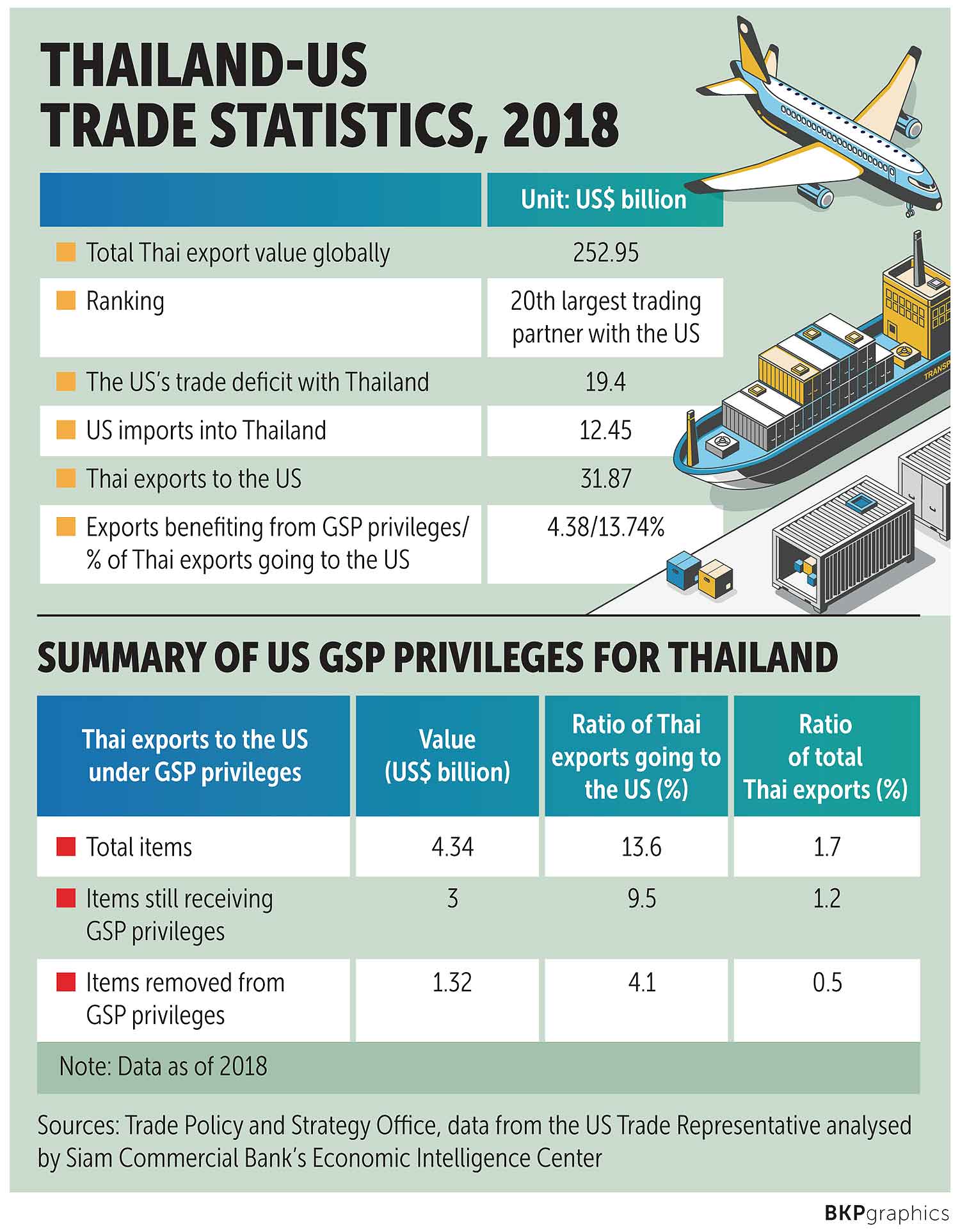 Thailand's automotive industry relies heavily on shipments to the US, largely for auto parts and tyres.

Achana Limpaitoon, honorary president of Tapma, said the auto supply chain will suffer much from the GSP suspension by the US.

"We cannot avoid it," she said. "When the tariffs come into effect in April, Thai-made auto parts and tyres will be subject to US import duties of 5-10%. Exporters have only one way out, to seek new export markets, as purchase orders from the US are expected to decline gradually from a rise of retail price tags."

Revoked US GSP benefits will induce Thai exports to face additional import duties between 0% and 21%, depending on the type of goods, with an average weighted effective tax rate of 3.9% or equivalent to a tax value of $52 million, Siam Commercial Bank's Economic Intelligence Centre (EIC).

Thai exporters may have to lower product prices before including US import duties for products that can be replaced easily or do not have high demand in the US market, the EIC said.

"Even though the overall impact may not be significant, the global economic slowdown and the baht appreciation are factors putting pressure on export businesses who depend on GSP privileges, especially small-sized businesses," it said.

Price competition, the economic slowdown and the strengthening baht, increased import duties will burden small businesses, resulting in insufficient liquidity and lower competitiveness, according to the think tank.

Mr Jurin said the Commerce Ministry has already prepared seven measures to offset the US suspension of trade preferences.

The first priority is to increase exports to the US over the next six months before the GSP cuts become effective. During this period, US buyers are expected to stockpile their supplies of affected goods, particularly processed food, rubber products and electrical appliances.

The strong baht means Thai entrepreneurs in the agricultural industry and the processed food sector will be encouraged to invest in technologies that increase their competitiveness, or invest in countries with which the US has free-trade agreements such as Canada, Chile and Mexico to gain access to the US market, Mr Jurin said. 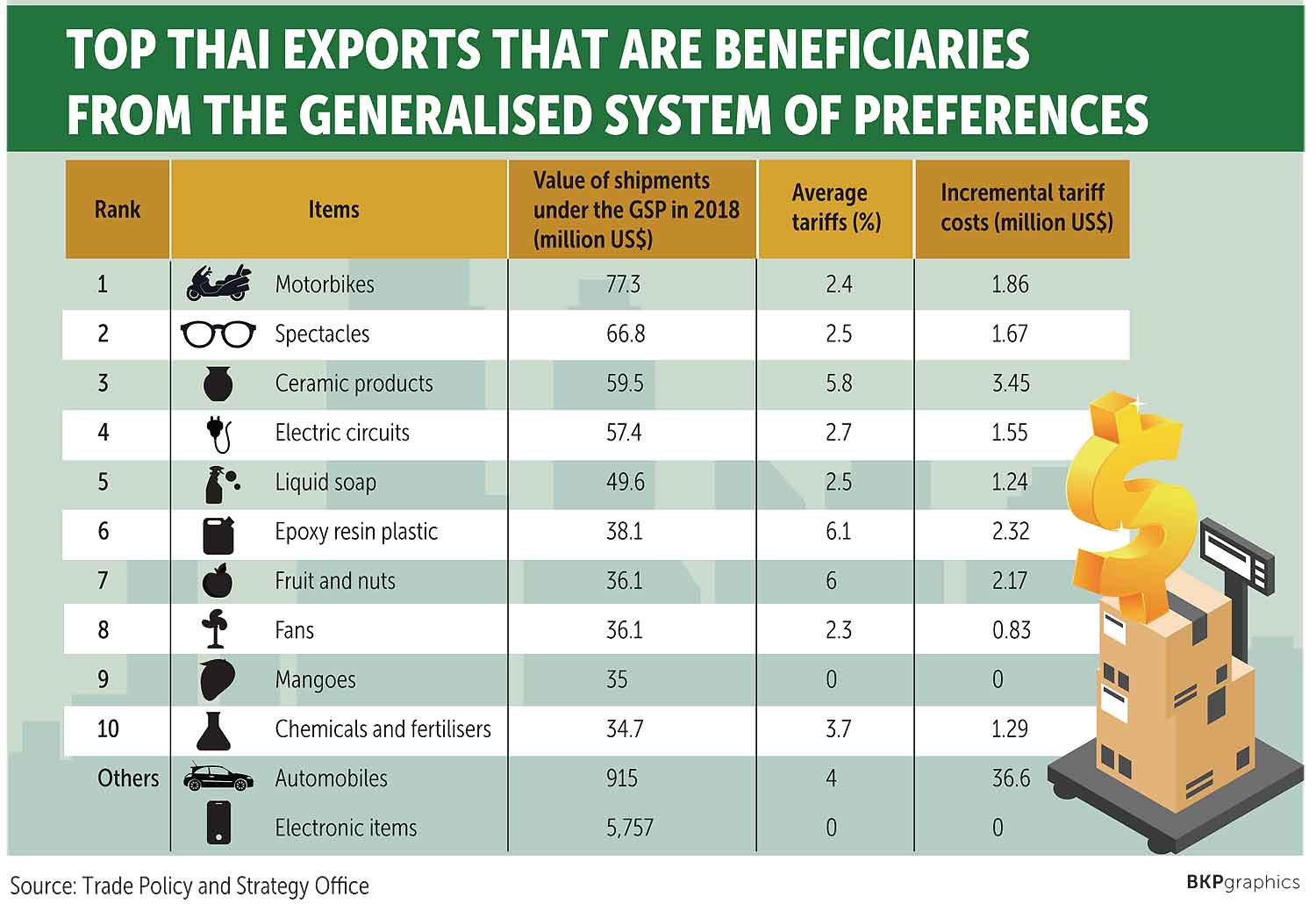 Call for a careful tourist reopening