B423m per licence approved by board

The telecom regulator has adjusted the reserve price for the 26-gigahertz spectrum meant for February's 5G auction, increasing it by 123 million baht to 423 million based on a Swedish university's study.

Takorn Tantasith, secretary-general of the National Broadcasting and Telecommunications Commission (NBTC), indicated last month the reserve price of the 26GHz range would be 300 million baht per licence.

Yesterday, the NBTC board approved the reserve price of 423 million baht per licence.

The new reserve price is roughly 80% of the 523 million baht speculated to be the winning price in a study by Chalmers University of Technology in Sweden.

The 26GHz spectrum auction has 27 licences, each with 100MHz of bandwidth. Winning bidders will pay only once, instead of 10 years of instalment payments for the 26GHz spectrum.

There is no change in the auction conditions for the other three spectrum ranges: 700MHz, 1800MHz and 2600MHz.

The auctions for the four spectrum licences are slated for Feb 16.

The reserve price for the 2600MHz range was based on a study by Chulalongkorn University, Chiang Mai University and Thailand Development Research Institute.

The reserve prices for the 1800MHz and 700MHz bands were based on winning prices of previous auctions.

Mr Takorn said the adjusted conditions are meant to be more practical.

The previous estimate of 300 million baht was designed for "licences for specific areas or regions", he said.

But as the range has been newly designed to be auctioned nationwide, a new reserve price is needed, said Mr Takorn.

"The NBTC board considers 423 million baht as more reasonable for the 26GHz auction because the winners can provide the service on the range nationwide," he said.

As the spectrum's reserve price is seen as affordable, a one-time payment should be made to the NBTC, said Mr Takorn.

Regarding the payment terms for the 700MHz, 1800MHz and 2600MHz ranges, 10% of the winning price per licence must be paid within the first year after the licence is handed over. A grace period for payment will then be given to operators from the second to the fourth year. From the fifth to 10th years, an annual instalment payment of 15% of the remaining licence cost must be made by operators.

He said the auctions' conditions will be posted on the NBTC's website on Nov 13-Dec 12 to seek public feedback. A public hearing is scheduled for Dec 3. 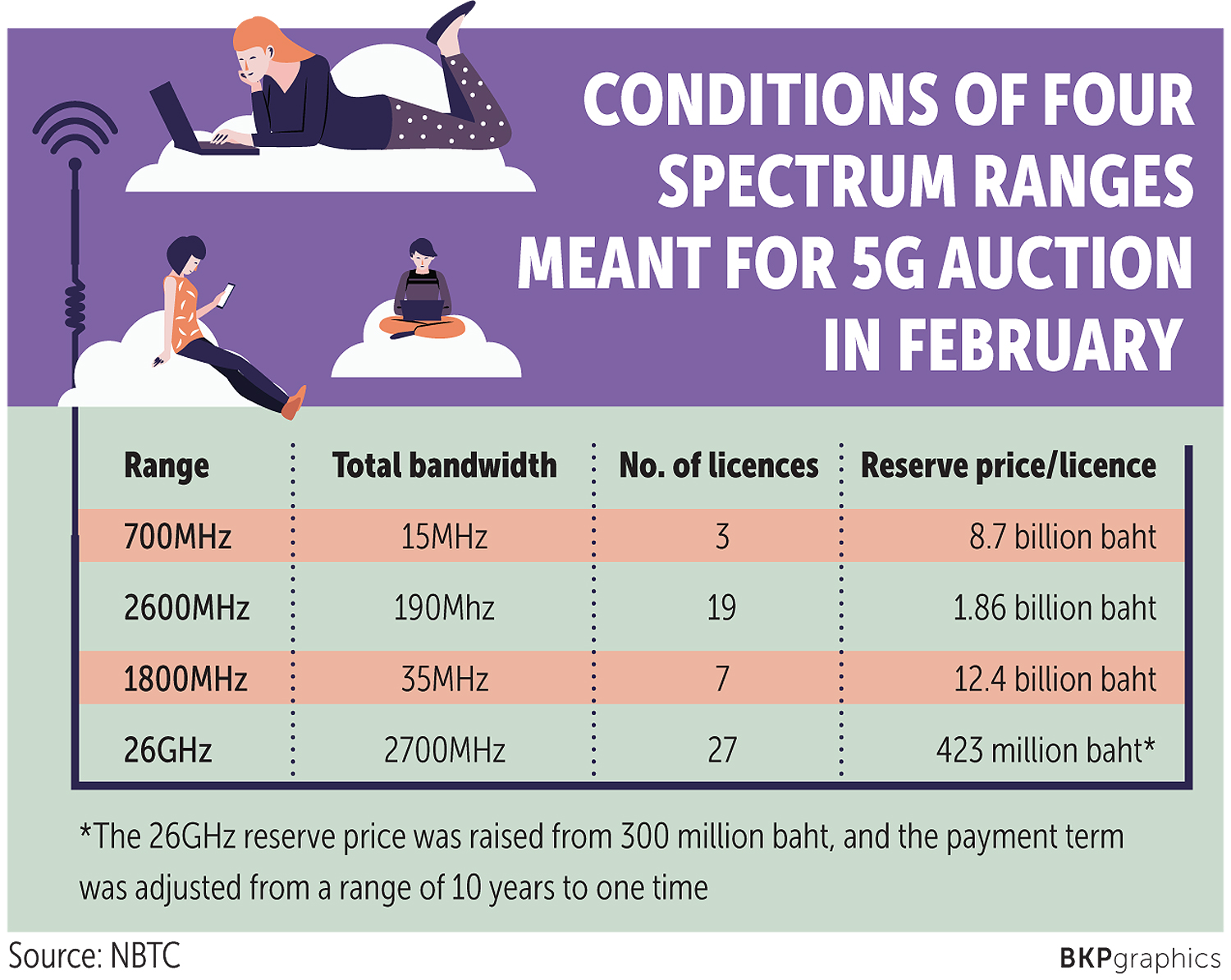 HONG KONG: Riot police were deployed across Hong Kong on Thursday as lawmakers debated a bill that would criminalise disrespect of China's national anthem, and as the United States piled pressure on China to preserve the city's freedoms.

A man fired several shots at a work colleague who admonished him for smoking, and later shot his brother-in-law while resisting arrest.