The Agriculture and Cooperatives Ministry is trying to limit the spread of a fungal disease that has damaged rubber trees in four southern provinces.

More than 330,000 rai of rubber in Narathiwat, Yala, Pattani and Trang have been ravaged by Pestalotiopsis leaf fall disease since it was detected in September.

The disease makes the rubber tree leaves fall and production drops up to 50%. Since it hit the four provinces, rubber output has dropped by 40,000 tonnes so far.

Thailand has about 14 million rai of rubber trees, 8 million of them in the southern region, according to  figures posted on the Rubber Authority of Thailand website. These plantations churn out around 2.6 million tonnes of rubber a year.

The disease, which is readily spread by wind, has already damaged 2.3 million rai of rubber trees in Indonesia and 16,000 rai in Malaysia, according to updated information from the International Rubber Research and Development Board. India and Sri Lanka were also hit by the fungus.

Thailand, Malaysia and Indonesia produce 70% of the world's rubber output.

The disease returned to the region in 2016, appearing in Sumatra, after it was first reported in Malaysia in 1975.

"One of the major causes of this spread is unhealthy rubber trees due to very low rubber prices in the past five or six years. The lower income induced rubber farmers to abandon and ignore the recommended fertilising system," the International Rubber Consortium (IRC) said on its website on Nov 6. (continues) 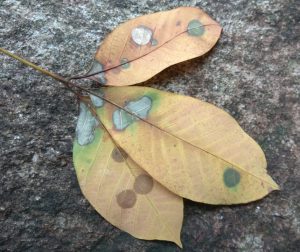 Rubber tree leaves die after being infested with the fungus. (Photo from International Rubber Consortium)

Agriculture and Cooperatives Minister Chalermchai Sri-on on Wednesday ordered the Rubber Authority of Thailand to contain the disease for fear it could spread to other southern provinces.

Krissada Sangsing, director of the Rubber Research Institute, said antifungal agents were needed to spray the trees and the ground to stop the disease, Manager online reported.

The institute plans to ask security agencies to allow use of drones to spray the agents in Waeng district of Narathiwat, the district bordering Malaysia that is hardest hit by the disease, it added. (continues)

The Rubber Authority of Thailand said it is considering compensation of 3,000 baht for each farmer whose crop was destroyed by the disease, but the plan still needed approval from the minister.

The IRC said rubber exports from the three countries this year could be down by as much as 800,000 tonnes. It did not mention this year's target.

PHNOM PENH: Cambodia is set to launch a lockdown in eight provinces bordering Thailand from midnight on Thursday, in a bid to prevent the spread of the Delta variant of the coronavirus in the country.

Phuket to press on with sandbox