Experts say the unemployment rate and the number of laid-off workers will rise in 2020. (Photo by Tawatchai Kemgumnerd)

If 2019 was already bad for businesses and policymakers, things may take a turn for the worse in 2020, as there are hints that an economic recovery is still out of sight, with a higher unemployment rate and shrinking factory production looming large.

Some 70% of Thailand's GDP comes from exports. With shipments reeling from the strengthening baht, the US-China trade dispute and technological disruption, the manufacturing and services sectors have been feeling the pinch of flagging shipments.

The ugly signs don't stop there. Weaker manufacturing and lower revenue in the services sector mean businesses have had to resort to cost-cutting measures to withstand the negative impact.

"The segment most affected by the economic slowdown is third-tier micro enterprises," said Yongyuth Chalamwong, research director for labour development at the Thailand Development Research Institute. "The unemployment rate and laid-off workers will probably increase next year, as a recovery in the manufacturing and services sectors is still not present."

Thailand's automotive industry flashed danger signs with the widespread news on social media in August that General Motors Thailand, the local production unit of the US parent, had cut a further 327 jobs at its Rayong plants.

GM Thailand affirmed the move as part of a plan to reduce operating costs and slim down the manufacturing facility. The company laid off both regular and contract workers by sending letters to employees.

GM's new-model Chevrolet Captiva SUV is being assembled at an Indonesia plant and not the Rayong plant, where the previous model was made in the past.

In the same month, another US car maker completed its restructuring plan that aimed to cut 70,000 salaried employees worldwide. Ford Thailand declined to clarify the local labour situation, saying only that two car plants in Rayong still employ 5,000-6,000 workers. The local operation remains a hub for Ford's international markets group.

The Federation of Thai Industries (FTI) has revised its outlook for the country's car production in 2019 to 2 million vehicles, down from 2.15 million, blaming bearish sentiment for both local sales and exports.

The FTI's automotive industry club downgraded its projection for the first time in 2019 after local sales and exports suffered from myriad negative factors that pulled down the country's output.

For the local car market, the club said this year's sales projection has been cut from 1.05 million cars to 1 million, as it saw a contraction for five months in a row from June to October.

For car exports, the club cut its full-year projection from 1.1 million to 1 million cars, saying the export sector is still hurting from the US-China trade war.

Chanchai Trakarnudomsuk, president of Mazda Sales Thailand, the local arm of the Japanese car maker, said that when car production did not pan out as expected, Mazda had to cut the output plan and reduce its overtime payments for local workers at the Rayong plant.

"The US-China trade war is the main factor lowering the country's exports, while overall economic sentiment pulled down GDP growth," Mr Chanchai said. "If Mazda continues with the original production plan, it will increase our inventory. The new plan aims to balance our car stock with demand both domestically and abroad."

He said the difficulty in the local market is car loan rejections from banks, pressuring the industry for five months in a row. 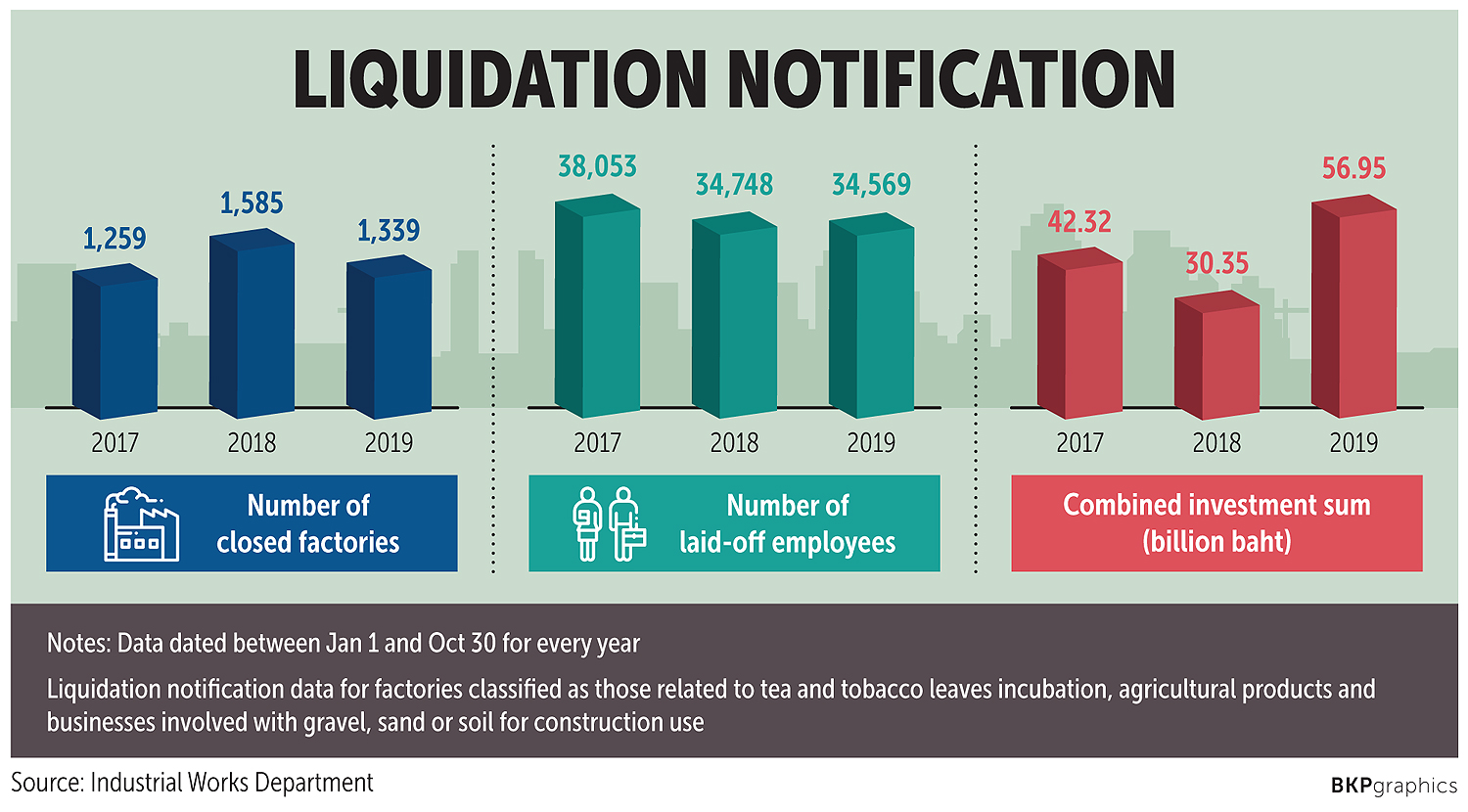 On the surface, Thailand's unemployment rate would seem to soothe jitters about the economic doldrums: it stood at 1% in September. But a closer look shows how the rate is heavily distorted.

Because there isn't much by way of unemployment insurance in Thailand, there isn't any impetus to stay jobless for long. Those who lose their jobs invariably enter the so-called informal sector or seek out a part-time job, and they are counted as employed.

The informal sector of the Thai economy, comprising anyone who's not covered by formal work arrangements, accounted for more than 64% of the total workforce in 2013.

This group includes street vendors and motorcycle taxi drivers, the self-employed and those operating in grey areas of the economy such as prostitution. They are largely counted as employed.

Another figure related to Thailand's unemployment may shine a better light on how the economy has continued to lose steam.

Unemployed individuals, defined as those seeking social security benefits while being unemployed, totalled 184,291 at the end of August, a 9.3% year-on-year rise from 168,676 registered in last year's corresponding period.

In July, the number of unemployed individuals seeking social security benefits was 191,657, up sharply from 153,661 recorded in the same month three years ago.

Tanit Sorat, vice-chairman of the Employers' Confederation of Thai Trade and Industry, said Thailand's employment is now under growing threat not only from slowing exports (due to weak global demand and the economic slowdown), but also rapid changes in technology and relocation of production bases by Thai and foreign manufacturers.

"The Thai economy relies heavily on exports," he said. "Once the world economy is going through a cycle of slowdown and global demand shrinks, the overall economic sectors of Thailand will definitely be hit [by knock-on effects].

"Even worse is how the country's transition into a digital economy and high technology adoption, such as artificial intelligence and robotics, will inevitably affect domestic employment, especially in the financial, retail and wholesale sectors, as well as the automotive industry."

With technology trending towards robotics and automation to serve electric vehicle production, mass layoffs are anticipated over the next three years in the domestic automotive industry, Mr Tanit said.

He predicts the number of workers subject to layoff to reach as high as 300,000 over the next three years.

Thailand is home to regional production bases for radiators, exhaust pipes and other key auto parts. 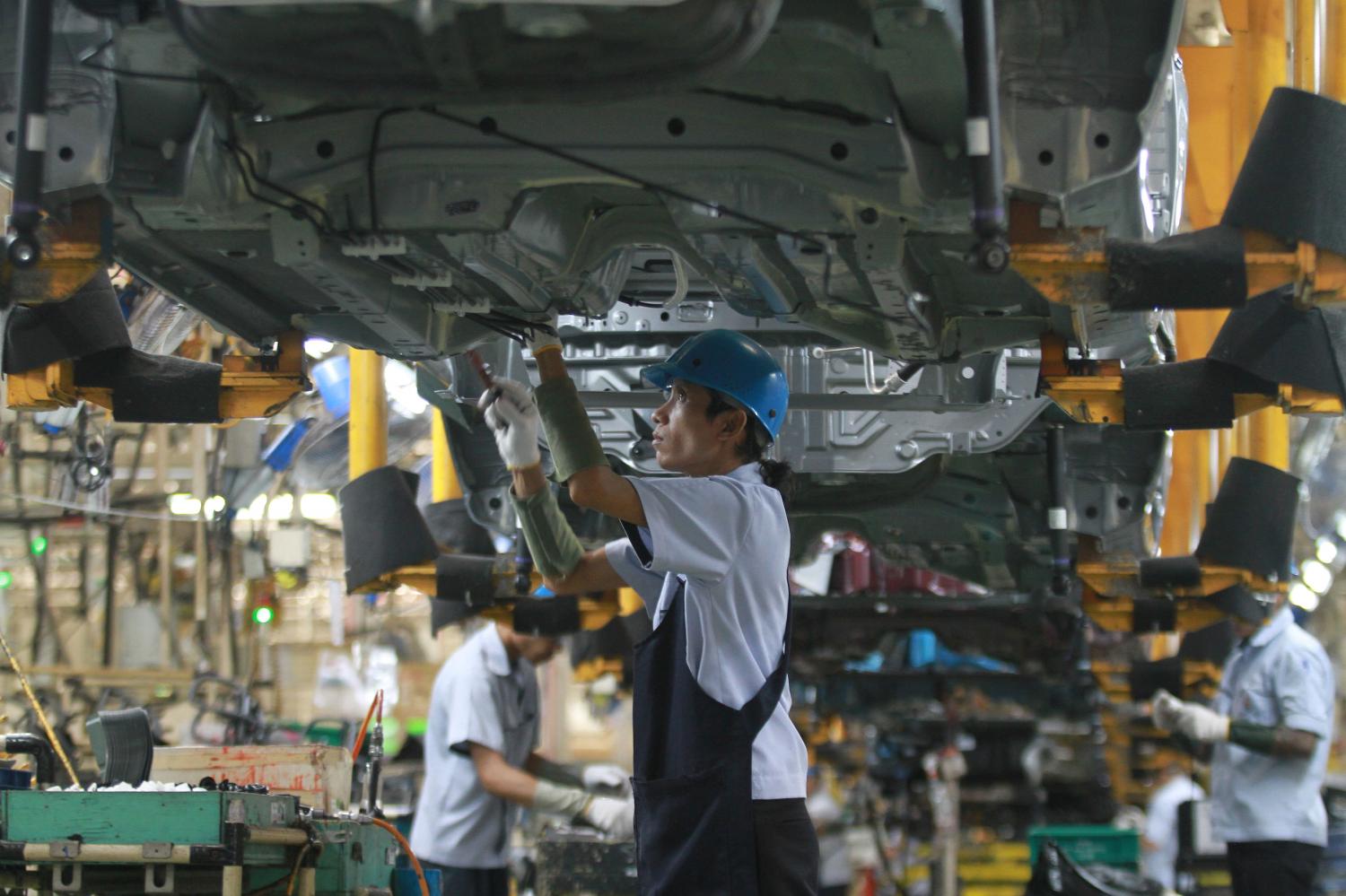 Workers are seen at a car manufacturing plant at the Laem Chanbang Industrial Estate in Chon Buri province. SOMCHAI POOMLARD

"The unemployment rate has the potential to rise further, since Thailand's economic structure is not compatible with the ongoing technological disruption," Mr Somjai said. "Also, the country's education system does not support adoption of modern technology, nor skills development."

"The FTI's current projection is down 7.7% from the previous one, so the current situation is sluggish in line with other industrial sectors," Ms Chanapun said.

She said the group's plant in Laem Chabang is still in operation. The group announced on Oct 21 that it would stop some units at the plant from Oct 26 to Dec 25, citing sluggish purchase orders from car makers.

The suspension includes laying off 100 employees for two months. They will get paid a salary of 75% the normal rate during the suspension, in compliance with the Labour Protection Act.

Ms Chanapun said Thai Summit needs to suspend some operating units because auto parts suppliers use a just-in-time process to deliver products to buyers, and when car makers cut their orders, the group has to fall in line.

Despite the closure of nearly 1,400 factories during the first 11 months of 2019, application requests for new factory openings totalled 2,889 as of Nov 12, said Krichanont Iyapunya, a deputy spokesman at the Industry Ministry.

There were also new jobs created from new businesses for 84,033 people, he said, and 84,704 have been employed on the back of new factory openings, compared with 35,533 laid-off employees.

"The overall condition of factory operations is not in a recession," Mr Krichanont said.

While exports may be slumping and the economy at risk of a widespread slowdown, salaries are unlikely to be affected, at least in the near term, says an expert from recruitment consultancy Robert Walters.

"Economic factors may have an effect for those staying at the same company if that company is doing well or poorly, but usually workers see a salary increase if they change position," said Punyanuch Sirisawadwattana, country manager for Robert Walters Thailand.

"If companies want a certain skill set that is in demand, they will still have to offer something attractive," she said. 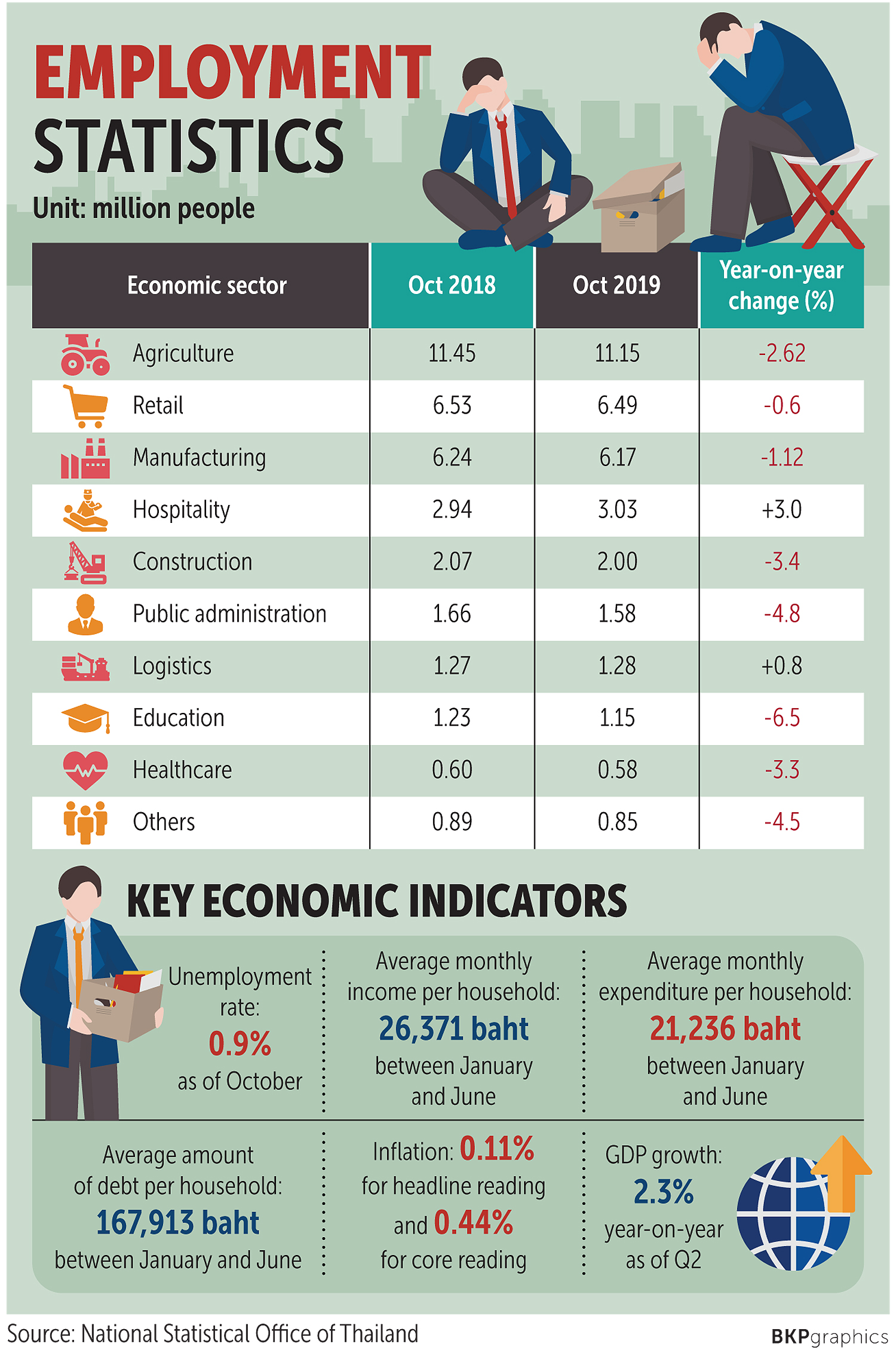