The slowdown in economic growth in the third quarter has prompted government think tank National Economic and Social Development Council (NESDC) to cut its 2019 GDP forecast again to 2.6% -- from an earlier projection of 2.7%-3.2%.

The lower projection was attributed to the country's poor export prospects in light of the slowing global economy, prolonged trade war and the baht appreciation, said Thosaporn Sirisamphand, the NESDC's secretary-general.

Mr Thosaporn said private investment was slower than expected this year due to the prolonged political struggle to establish a new government, prompting a knock-on effect on public investment.

The NESDC also downgraded the export forecast this year to a contraction of 2%, down from a 1.2% pullback, citing the trade rift and slower global economy and world trade, which were projected to expand by 3.1% and 1.5%, respectively, down from 3.3% and 3.4% in earlier projections.

Nonetheless, Mr Thosaporn said private consumption showed an upward trend, with the figure expected to grow 4.3%, up from a projected 4.2%, thanks largely to a spate of economic stimulus measures.

The outlook for government consumption was maintained at 2.2%.

"Economic stability remains favourable, with unemployment at 1.1% and headline inflation averaging 0.6%," he said.

"The current account balance is projected to register a surplus of US$9.1 billion this year. At the end of September 2019, the international reserves stood at $221 billion and public debt was recorded a total 6.9 trillion baht or 40.9% of GDP."

On Monday, the NESDC reported the economy rose 2.4% year-on-year in the third quarter, driven mainly by increases in private and government consumption and investment, slightly improving from 2.3% year-on-year in the second quarter but lower than 2.8% in the first quarter. 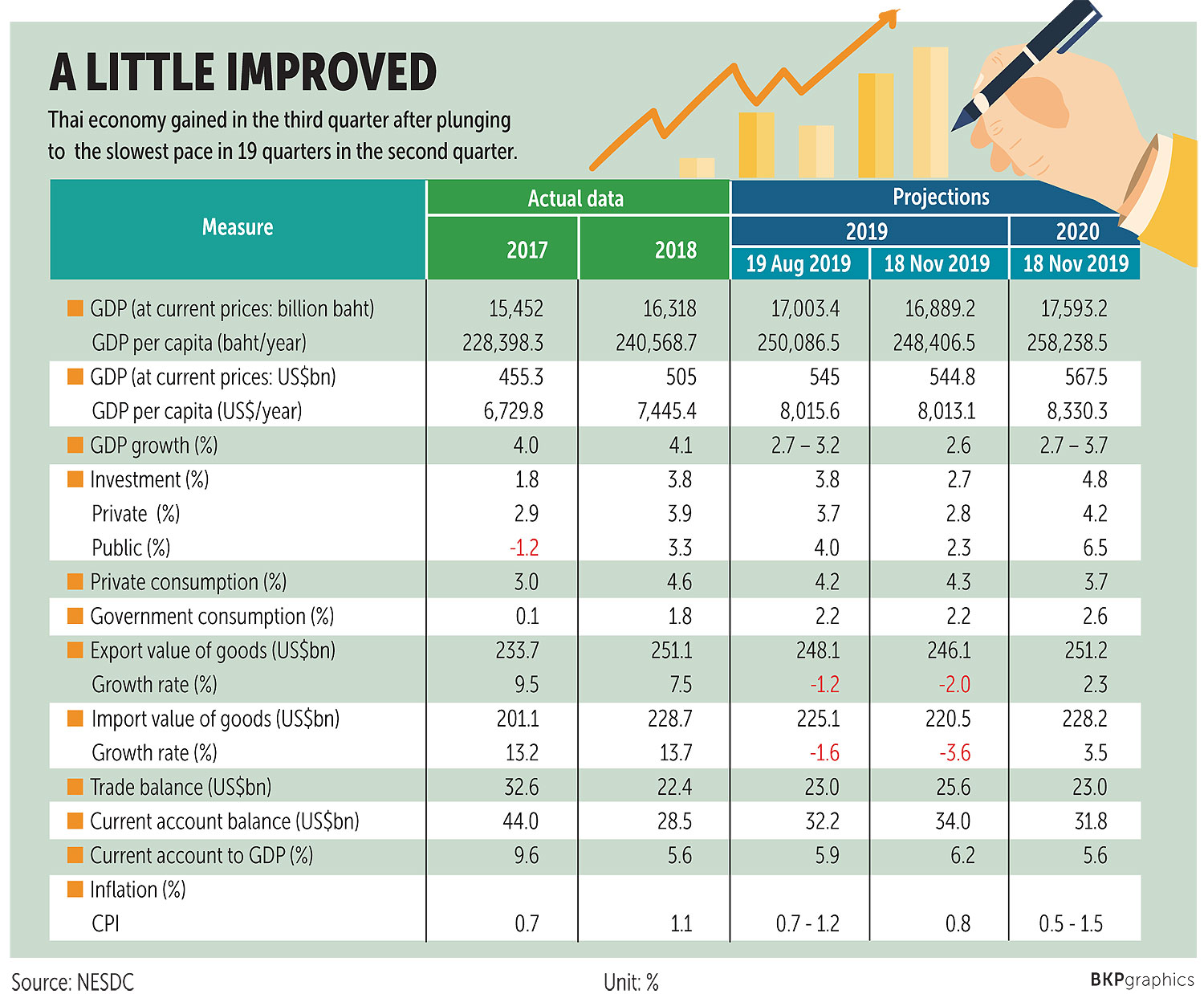 On the production side, the primary sector grew by 1.5% in the third quarter in contrast to a fall of 1.3% in the second quarter.

The secondary sector grew by 2.3%, slowing from a rise of 2.6% in the previous quarter.

The deceleration was a result of a 1.5% fall in the manufacturing sector because of a drop of export-oriented industries and slower domestic demand.

Wholesale and retail trade, repair of motor vehicles and motorcycles, and transport and storage grew by 6.6%, 5.6% and 2.5%, respectively.

On the expenditure side, government consumption and public investment increased by 1.8% and 2.8%, compared with a rise of 1.1% and 1.9% in the second quarter, respectively.

Private final consumption grew by 4.2%, following a rise of 4.6% in the second quarter.

For the external sector, exports and imports of goods decreased by 0.3% and 7.7%, respectively.

With seasonal adjustments, the economy expanded by 0.1% in the third quarter from the second quarter.

The NESDC projects the economy will grow 2.7% to 3.7% next year, boosted by private and government investment as well as improved exports and tourism.

Deputy Prime Minister Somkid Jatusripitak said economic growth in the third quarter improved. The latest forecast of 2.6% growth for the year is fairly good given the global economic slowdown, he said.

Mr Somkid is confident the economy in the fourth quarter will fare better than the third quarter because of the government's stimulus measures and accelerated disbursement of a 100-billion-baht budget the remaining two months by state-owned enterprises.

He said the Finance Ministry still needs to prepare additional stimulus measures for the economy, especially for the tourism and property sectors.

Finance Minister Uttama Savanayana said economic growth will likely fall short of the ministry's forecast of 2.8% this year after third-quarter growth was weaker than expected.

"The global economy dealt a blow to exports, which dragged the domestic economy, particularly the manufacturing sector," he said.

The ministry's agencies have been instructed to closely monitor the situation, said Mr Uttama.

The fourth-quarter economy is expected to give a boost to full-year growth as the stimulus measures just started in the late third quarter, he said.

Mr Uttama said the measure to accelerate investment at state enterprises is an example, which was approved last week, with around 100 billion baht expected to be spent in the final quarter if everything goes as planned.

He repeatedly said additional stimulus measures will be launched if needed.

In late October, the Fiscal Policy Office downgraded the economic outlook this year to 2.8% from 3% predicted in August.

The number of newly opened plants outpaces those shut down and 80,000 new jobs are needed for plant expansions, said Mr Uttama.

Industry Minister Suriya Jungrungreankit said business operators have urged the Bank of Thailand to rein in the baht's strength as the industrial sector, which makes up 30% of the country's GDP, is being harmed.

"The auto sector is being affected and automakers blame the baht's gains. If the central bank takes care of the issue, the auto sector will fare better," he said.