US the best country in the world for female entrepreneurs, Thailand moves up to 14th, finds Mastercard survey

A team of young Asian entrepreneurs meet in an office to discuss ideas for new business. Entrepreneurship is viewed positively and perceived as a good career choice in Thailand.

The US ranks just ahead of New Zealand as the top market in the world for women entrepreneurs, while Thailand moved up five places from last year to 14th in the latest annual survey by Mastercard.

The Mastercard Index of Women Entrepreneurs 2019 identifies the markets where women entrepreneurs are most likely to thrive, while sounding the alarm that there are still significant inequalities that hold them all back.

Based on publicly available data from international organisations including the International Labour Organization, Unesco and the Global Entrepreneurship Monitor, the index tracks the progress and achievement of women entrepreneurs and business owners in 58 markets, representing nearly 80% of the world's female labour force. 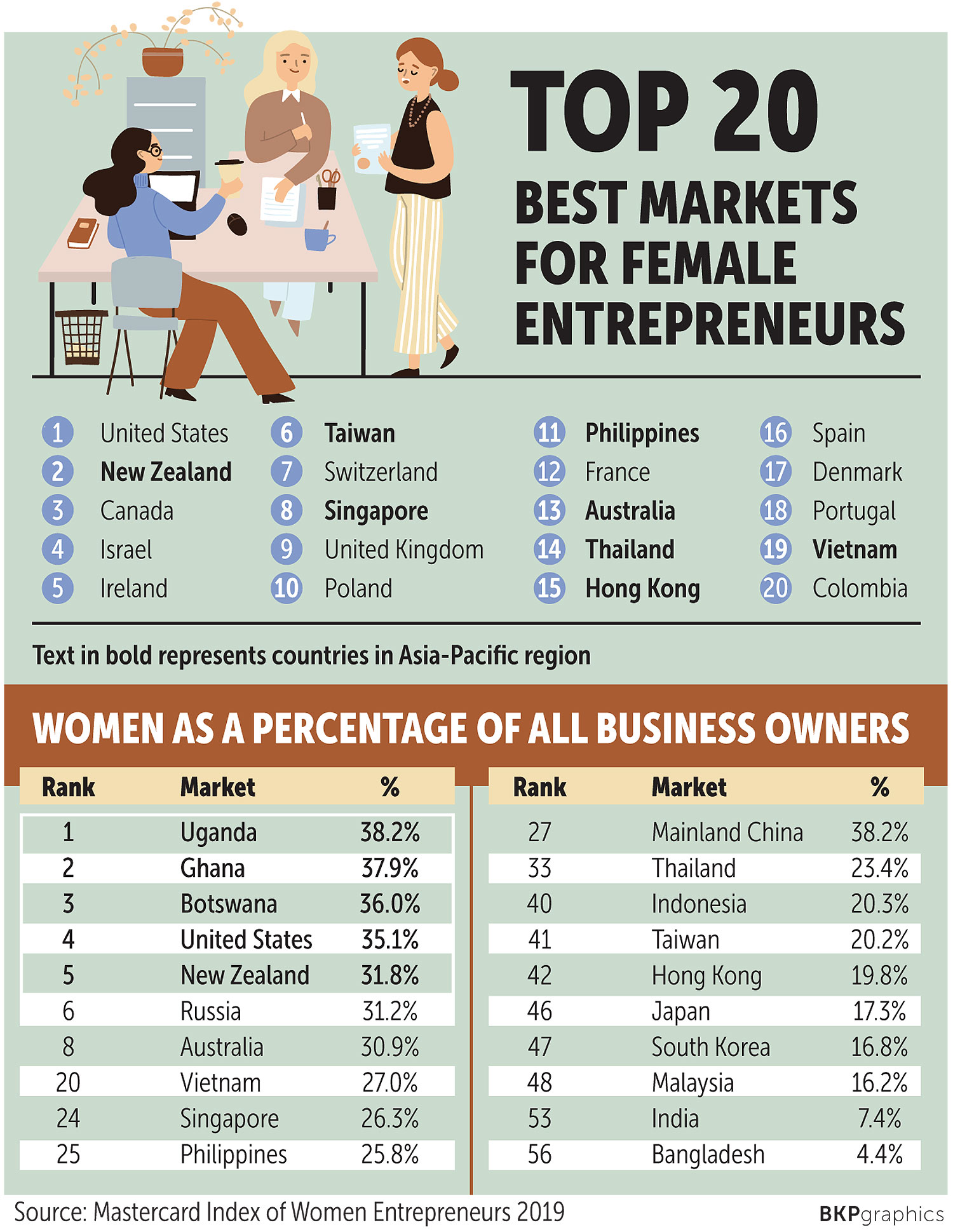 Women are also able to draw from enabling resources, including access to capital, financial services and academic programmes, the survey showed.

Typically, these open markets are also driven by social norms that deeply encourage and promote innovation, creativity, risk‐taking and success through personal perseverance, and grant women fair opportunities to rise as business leaders, gain tertiary education and to be perceived and accepted as successful entrepreneurs.

Out of the 20 highest-ranking markets globally, 80% are high-income economies.

Of the 58 markets included in the index, eight moved up by more than five spots year-on-year. Fast-rising markets in Asia-Pacific included Indonesia (+13), Taiwan (+9) and Thailand (+5).

"The generally high rate of women's business ownership and entrepreneurship in Indonesia and Thailand may be explained by the fact that entrepreneurship is positively regarded and perceived as a good career choice, with the majority believing it is easy to start a business," the report noted.

"In Japan [45th in the ranking], the low inclination towards entrepreneurship may be explained by the fact that few perceive it to be a good career choice (27% compared to 65% in Indonesia and Thailand)."

In markets at the lower end of the index, women tend to be held back by lack of opportunities to assume higher-level economic roles, the survey said.

"Importantly, societal and cultural norms also discourage them from working, being ambitious, or assuming leadership roles," the authors wrote.

"What is clear through this research is that gender inequality continues to persist across the world, although it manifests in different ways," said Julienne Loh, executive vice-president for enterprise partnerships in Asia-Pacific with Mastercard.

"It isn't a developed or developing world problem alone. Even in markets with the most promising entrepreneurial conditions, women's business ownership hasn't reached its full potential. This marginalisation hinders the empowerment of women socially, professionally, economically and politically -- to the detriment of society as a whole."

Mastercard, she said, was looking to tackle this problem by providing tools and networks to drive inclusive growth and put the digital economy to work for everyone.

"Women-owned and led businesses are strong catalysts for economic growth, improving the lives of everyone. With this study, we are shining a light on those under-represented because even today, inequality and exclusion still hold women back," said Ann Cairns, executive vice-chair of Mastercard.

"Now is the time for governments and organisations to power together to support women to advance their businesses by eradicating gender bias and ensuring greater access to education and financial inclusion."