Advanced Info Service (AIS) and Total Access Communication (DTAC) have expressed concerns over possible technical hindrances from the use of 2600-megahertz spectrum in February's 5G licence auction as 20 megahertz of bandwidth on the range is being used by the army's security agency. 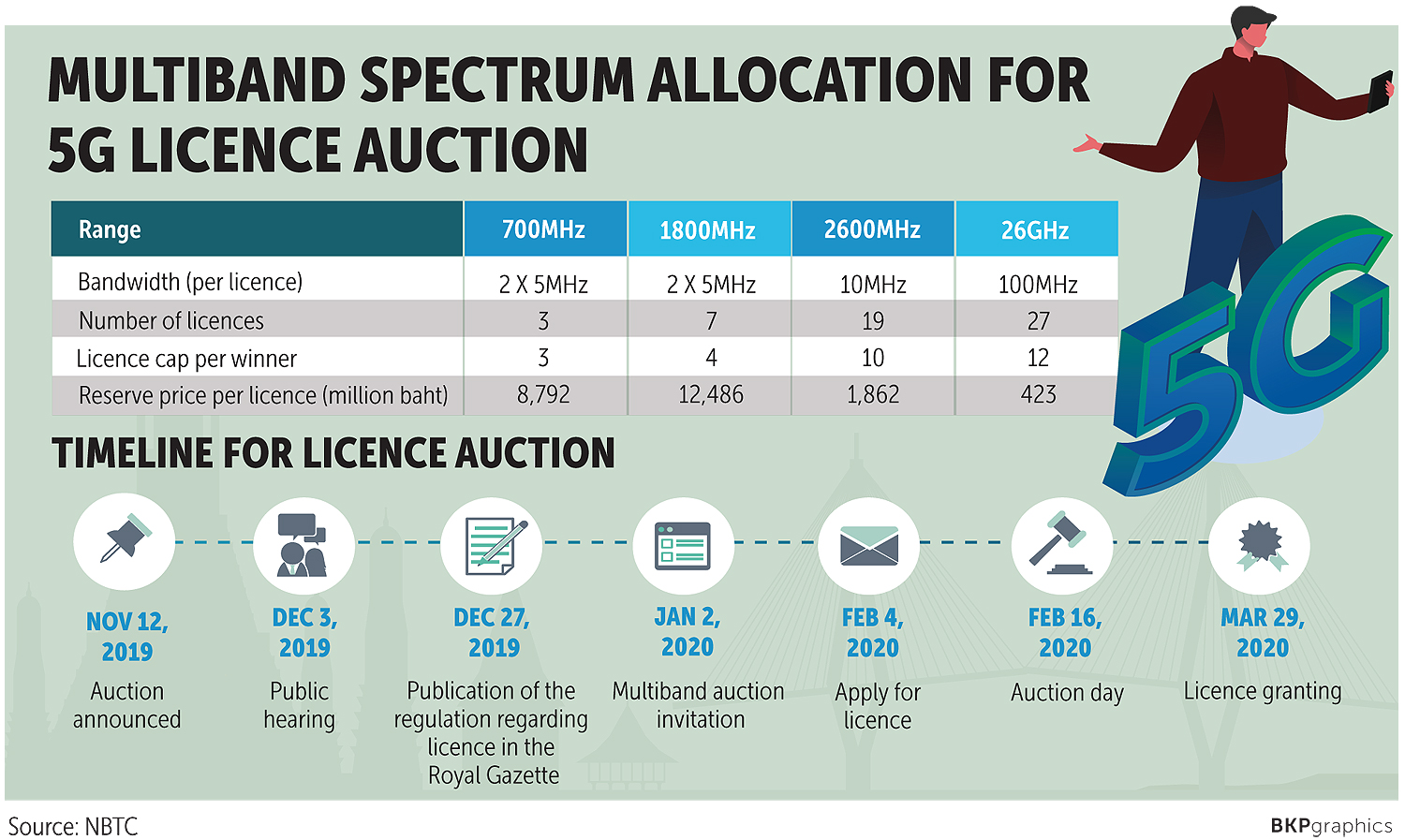 The operators said they risk ending up having restricted use on the spectrum as the bandwidth has not been returned.

The National Broadcasting and Telecommunications Commission (NBTC) announced it plans to hold a 5G spectrum licence auction for four bands on Feb 16, 2020. The four bands are 700MHz, 1800MHz, 2600MHz and 26 gigahertz.

Yesterday the NBTC held a public hearing about the draft plan for the auction.

NBTC secretary-general Takorn Tantasith said the agency would collect all recommendations for the plan until Dec 13. The NBTC board plans to discuss the plan in late December.

"We will consider all reasonable proposals to ensure optimum benefits for industry and the economy," said Mr Takorn. "But some suggestions, such as the postponement of the planned auction, are impossible."

On Monday, DTAC urged the NBTC to delay the auctions to allow the 3500MHz spectrum to be included.

Suthep Tamanuwat, head of business relationship and development at AIS, said the 700MHz and 1800MHz licences may not be attractive as the major operators already hold some bandwidth on the ranges, while the reserve prices for the two bands are very high.

He said the 2600MHz range's reserve price of 1.86 billion baht for 10MHz of bandwidth is too expensive, while 20MHz of bandwidth on the spectrum is still being used, which may cause technical restrictions in the future.

"AIS is concerned about technical conditions for 2600MHz usage and the high reserve price," said Mr Suthep. "The company is willing to support the government's policy to drive the country's competitiveness."

Narupon Rattanasamaharn, DTAC's senior vice-president and head of the regulatory division, echoed Mr Suthep, saying DTAC is worried about possible interference and usage restrictions for the 2600MHz spectrum. The reserve price stipulated by the NBTC is the third highest in the world, he said.

Responding to concerns about 2600MHz usage after the auctions, Mr Takorn said the 20MHz of bandwidth used by the army is unlikely to have a significant impact on the areas chiefly targeted for 5G adoption. The bandwidth could be returned after the auction, he said.