Personal income tax cut may be the key

Fiscal stimulus should target the middle class and salaried workers as they are not as affected by the flagging economy and their purchasing power remains resilient, says the head of Krungsri Research. 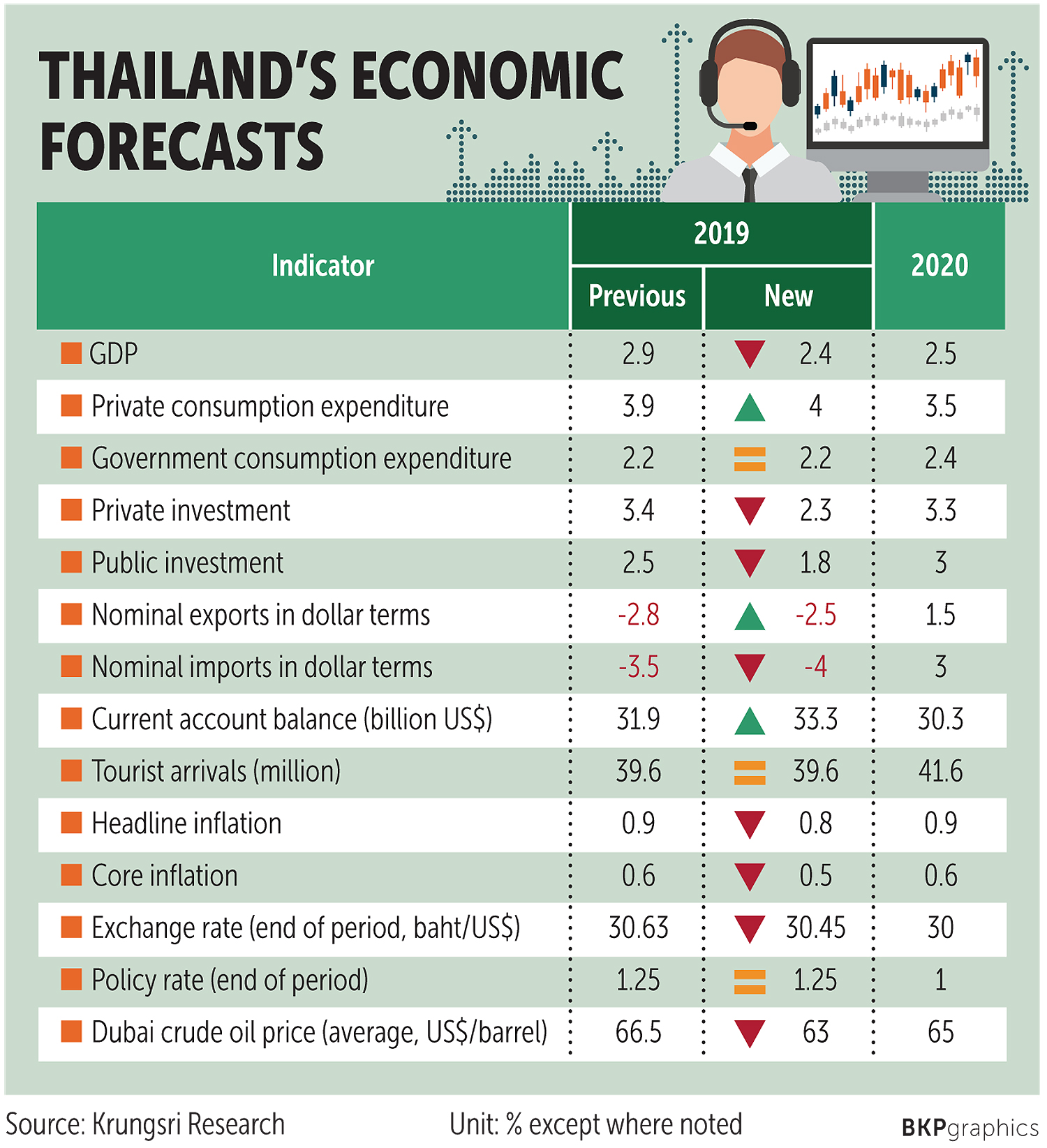 Available tools for fiscal stimulus are state spending and taxes, he said, noting that implementation could widen the government's budget deficit but this is not worrisome, given the low level of public debt at 40% of GDP.

Without the stimulus packages, the economic slowdown will be aggravated, resulting in lower tax revenue and a higher budget deficit, said Mr Somprawin.

A personal income tax cut, which might be implemented on a temporary basis, could stimulate the economy, he said.

"The global economy shows signs of recovery, but the local economy remains murky. There is a 27.3% likelihood the economy will slip into recession, up from 4.1% in the first quarter of last year, but still far from the alarming level of 40%," said Mr Somprawin.

The economy is not in recession, but the possibility is increasing as the economy sags and becomes more fragile, he said.

The latest forecast by Bank of Ayudhya's research arm is below the National Economic and Social Development Council's projection at 2.6%, and the Bank of Thailand's and Finance Ministry's at 2.8%.

The central bank is slated to revise the forecast for GDP growth in 2019 and 2020 at this month's meeting, where a downgrade is anticipated after a weaker than expected reading in the third quarter.

The economy grew 2.4% year-on-year in the third quarter, marginally improving from 2.3% in the previous quarter but below the 2.8% seen in the first three months of the year.

Domestic investment is expected to remain weak next year, given that capacity utilisation is at 60%, still below the 70% threshold where additional investment boosts production capacity. This could compel the government to roll out new stimulus measures, Mr Somprawin said.

Fresh economic stimulus measures must be unveiled at the right time and hit the right target, he said.

The forecast of 2.5% growth in 2020 assumes the country's customs-cleared exports in dollar terms will reverse course to expand 1.5%.

Despite monetary policy easing, money flows in the economic system have slowed, which is an indicator of the sluggish economy, said Mr Somprawin.

He predicted the Monetary Policy Committee will cut the benchmark rate by another 25 basis points next year from a record low of 1.25%, last recorded during the 2007 global financial crisis, to prop up the economy.

Finance Minister Uttama Savanayana said the ministry is mulling additional perks for the Taste-Shop-Spend scheme and they are expected to be finalised this month.

New privileges are expected to be adopted next year as a New Year's gift to Thais, he said.