The Joint Standing Committee on Commerce, Industry and Banking is optimistic about the economic outlook recovering for 2020. (Bangkok Post file photo)

Business operators are optimistic about the economic outlook recovering for 2020, driven by the government’s budget disbursement and stimulus measures to beef up investment and consumption.

The Joint Standing Committee on Commerce, Industry and Banking (JSCCIB) said border trade with neighbouring countries and the tourism sector are the main contributors propelling growth.

Kalin Sarasin, chairman of the Thai Chamber of Commerce, said the economy will benefit from many internal factors, while external factors such as the US-China trade war pressure the global economy.

“We hope these internal factors will offset a global economic downturn,” he said.

“The government should speed up budget disbursement because a delay in state spending will postpone megaprojects.”

Mr Kalin said the economic fundamentals remain strong and attractive for future investment flows, but the political landscape has to be stable to build up investor confidence. 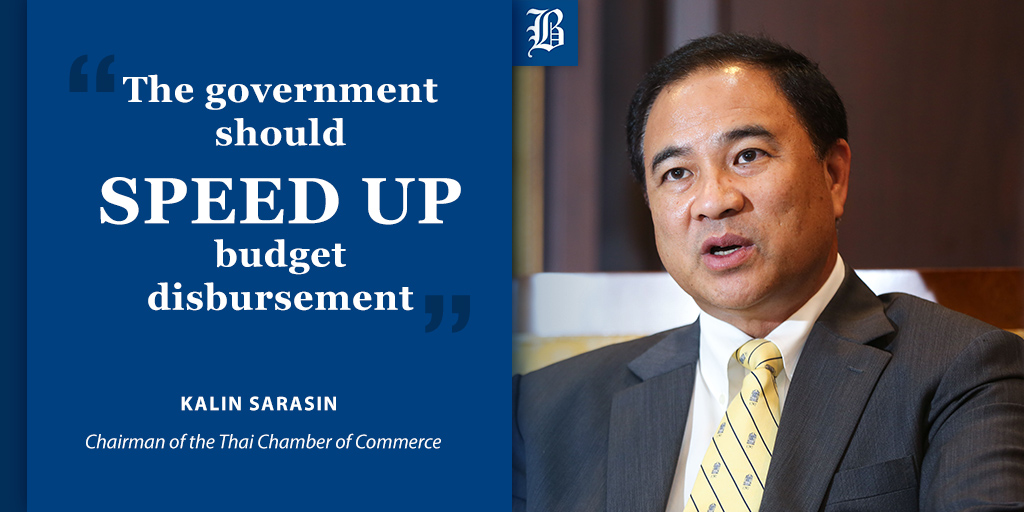 For this year, JSCCIB forecasts Thailand’s GDP growth outlook at 2.7-3% and an export contraction of 0-2% because of the US-China trade war, Brexit woes and baht appreciation.

The strong baht is affecting the country’s export sector, with the currency gaining over 7% against the US dollar this year.

He said the baht is at 30 to the dollar, but for Thailand to be competitive the baht needs to be at 33-35 per dollar.

“Both public and private sectors should discuss and cooperate to find solutions for the strong baht,” said Mr Kalin.

JSCCIB called on the government to launch new measures to stimulate the consumption sector such as the Shop Chuay Chart campaign that gave tax refunds for shopping.

They also said the tax deduction for inbound tourism should be extended further for 2020, especially in secondary provinces.

The private sector is also calling to speed up value-added tax refunds for Thai companies and connections with the government’s e-payment service.

The government is also being told to develop provincial irrigation reservoirs to support farming areas nationwide.

“Thailand has more than 7,000 rural communities. The irrigation system can help them in the event of drought,” said Mr Kalin.