Cash flow from operations is unlikely to cover a surge in capital spending and spectrum payments, says Fitch

Thai telecom operators will see increased leverage challenges in 2020, Fitch Ratings says in a new report. Free cash flow is likely to turn negative as slow growth in cash flow from operations is unlikely to cover a surge in capital expenditure and spectrum payments. 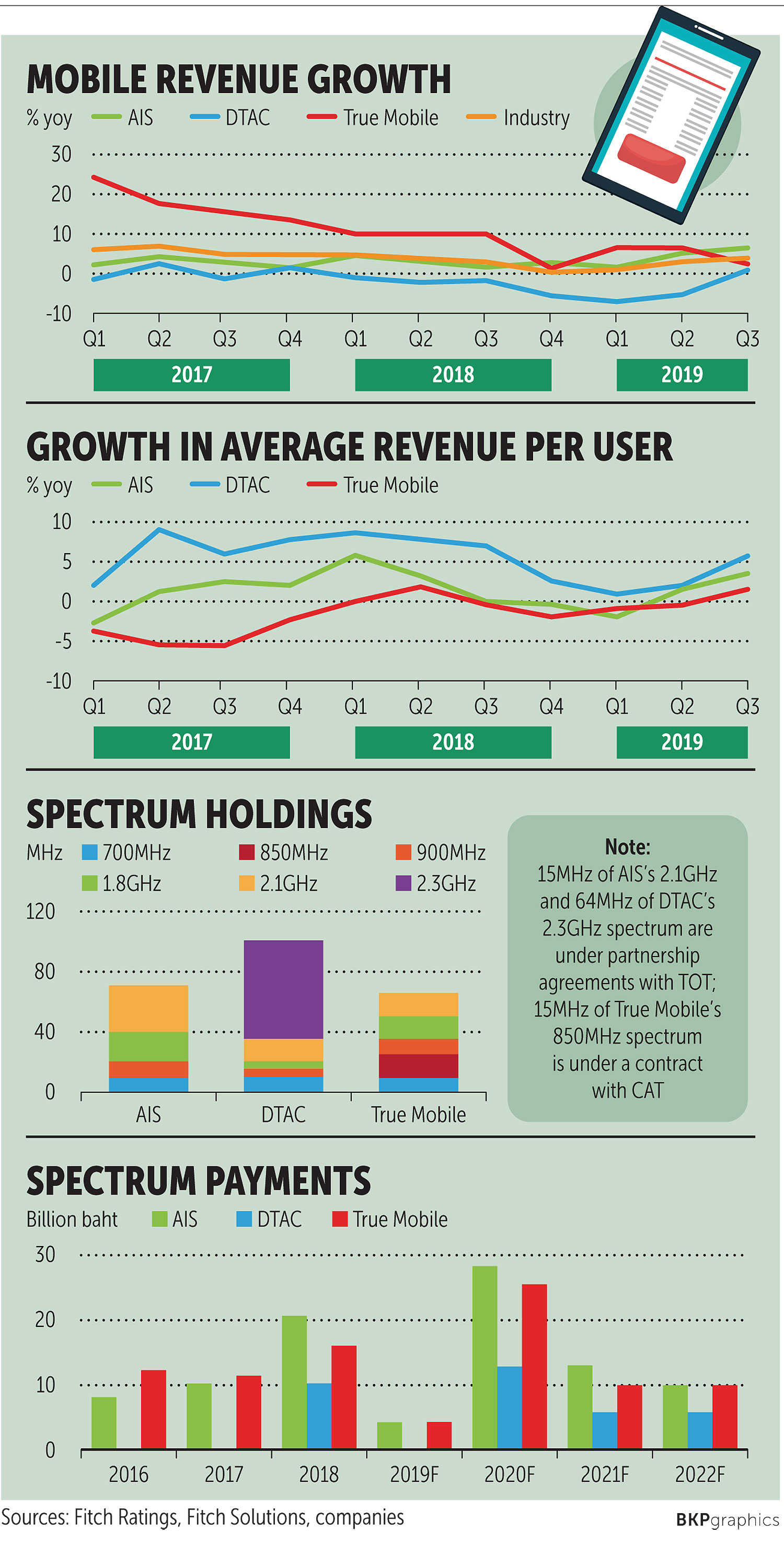 Operators are likely to focus more on improving profitability and balance sheets to preserve cash flow for a progressive 5G roll-out. However, the existing 4G network is likely to remain the dominant technology in Thailand to cater to data demand in the next few years.

Competitive intensity should ease in the near term, as negative free cash flow prevents excessive competition and the likelihood of operators behaving too aggressively during a high-capex cycle.

Nevertheless, Fitch expects the sector's revenue growth to remain weak in 2020. In the first nine months of 2019, revenue expanded by only 2.5%.

Market saturation: The mobile industry in Thailand is saturated with limited growth in subscriber numbers, in light of the high penetration rate of over 130% as of the end of 2018. As a result, revenue growth will be driven mainly by ARPU (average revenue per user) improvement from more data usage and the migration of prepaid subscribers to higher-priced data postpaid plans. Postpaid ARPU is around three times that of prepaid.

Monetisation challenge: Boosting data monetisation is becoming a bigger challenge, taking into account slowing growth in data usage. The growth in data subscriptions and traffic has started to decelerate since the second half of 2018 on higher 4G device penetration. The number of 4G device users in Thailand is high, accounting for 64% for AIS as of Sept 30, while smartphone penetration for DTAC was 84.1%.

Fitch believes that operators need to monetise data better to achieve stronger revenue growth in the longer term. This will require the ability to adjust data pricing to a strategy that charges subscribers according to their usage and away from unlimited or large data allowance packages.

Spectrum payments ease: The price of the 700MHz spectrum allocation in June 2019 was not expensive compared with prices in previous auctions, while the ability to pay in 10 annual instalments should help reduce cash flow pressure on the operators.

In addition, the extension of the 900MHz payment schedule will help delay spectrum payments, and ease pressure on balance sheets, particularly when the largest spectrum payments occur in 2020 for AIS and True Mobile. Fitch expects the new 900MHz spectrum payment terms could reduce projected net leverage for the sector by around 0.6 times in 2020.

Fitch also expects 5G capital expenditure by Thai operators to be limited in 2020, considering the early stage of adoption and the lack of business cases to justify the need for stand-alone 5G networks.

"Most operators remain cautious on the massive roll-out of 5G services. They are likely to use existing 3G and 4G technologies to provide sufficient speeds to cater to data demand in the next two years," it said. "The lack of urgency to switch to 5G services should help operators to manage the eventual transition to 5G and prepare for the 5G capital expenditure upcycle in a more efficient manner."

Fitch said AIS's credit profile would remain strong over the medium term, due to its strong data leadership position and its extensive network coverage, despite the sector's negative outlook.

It expects AIS's mobile service revenue growth to accelerate in the fourth quarter of 2019 and into 2020 at 5-6% year-on-year, compared with 2.8% in 2018. ARPU is likely to increase due to the easing of competition in the market, as all operators have ceased offering postpaid unlimited plans since the second quarter of 2019.

AIS is poised to be the biggest beneficiary given that it has the largest proportion of subscribers using postpaid unlimited data plans. This group of subscribers is likely to migrate to higher-priced data plans during the second half of 2019 and the first half of 2020, which should help support ARPU uplift.

AIS has the competitive advantage of its dominant market position and stronger network coverage, especially in rural areas, amid its massive 4G network roll-out during 2016 and 2017. Its service revenue grew faster than the industry average in recent quarters, with 6.4% year-on-year growth in the third quarter of 2019 and 5.1% growth in the second quarter, compared with a mere 1.7% growth in the first quarter of 2019.

DTAC, meanwhile, is now in a good position to plug the gap in spectrum portfolio and network quality that has constrained its competitiveness in recent years, with the acquisition of 900MHz and 1.8GHz spectrum in late 2018 and 700MHz spectrum in June 2019.

Fitch expects DTAC's service revenue growth to turn positive in 2020, after the continued drop in market share since 2014. However, the growth in 2020 is likely to be slow at around 2%. This is supported by the improvement in mobile-network coverage and a moderation in market competition.

Nevertheless the negative rating outlook on DTAC, applied on Oct 15 this year, reflects the company's weakening deleveraging capacity. Its ebitda (earnings before interest, tax, depreciation and amortisation) recovery is likely to be slow and insufficient to support the surge in capital expenditure over the medium term. Fitch expects DTAC's funds from operations (FFO) adjusted net leverage will remain above 2.5 times over the next two years. The ratio at the end of 2018 was 2.8 times.

True Mobile's service revenue growth, meanwhile, is expected to slow to around 4-5% in 2019 and 2020, from 7.5% in 2018, as the company steps down its aggressive offerings to focus more on its profitability and financial position.

True Mobile's market share gain came to a halt in the second quarter of 2019 at around 22%, and its revenue growth slowed to 4.9% in the first nine months of 2019, from 7.5% in 2018. True Mobile had the weakest ebitda margin of 24% among the three companies in 2018, compared with 36% for DTAC and 43% for AIS. This is mainly because the company had high marketing costs to win subscribers from competitors in recent years.