The Bank of Thailand cuts forecasts for economic growth to 2.5% for this year and 2.8% the next as the US-China trade spat continues to hurt exports. (Bangkok Post photo)

The Bank of Thailand left the policy rate unchanged at a record low but offered a grim outlook by cutting forecasts for economic growth to 2.5% for this year and 2.8% the next as the US-China trade spat continues to hurt exports.

The economy expanded below its potential as merchandise exports contracted more than previously assessed and were projected to recover more slowly than expected, said Titanun Mallikamas, secretary of the Monetary Policy Committee (MPC).

The downgrade for 2019 is below the National Economic and Social Development Council's 2.6% projection.

The central bank also increased the payment-based outbound shipment contraction projection to 3.3% this year from 1% in September. The outlook for 2020 exports was also pared to 0.5% growth from 1.7%.

Public expenditure and private investment should expand at a slower pace than expected because of delays in some state enterprise investment projects and public-private partnership infrastructure investments that weigh upon growth. 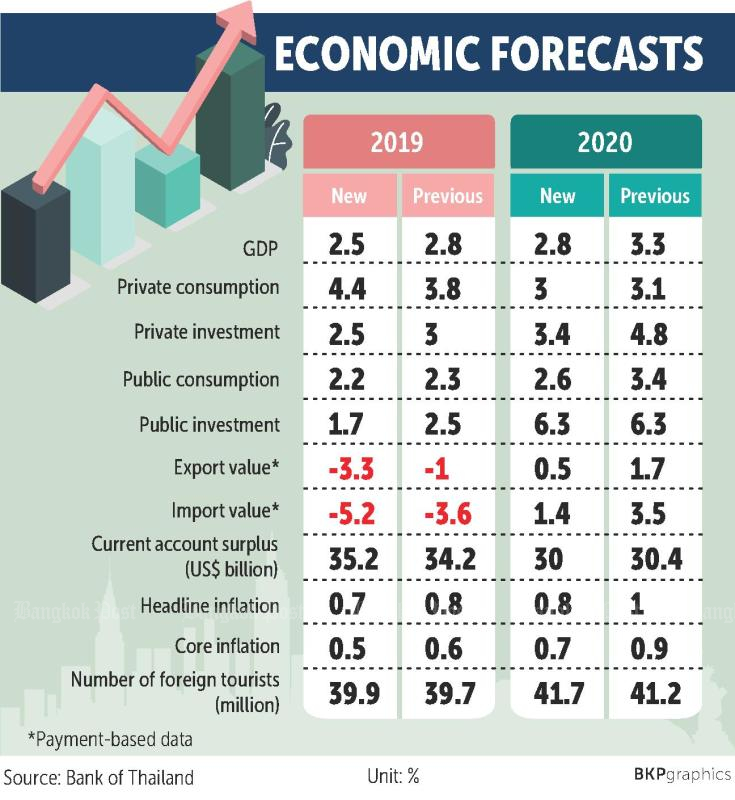 Private consumption was seen to decelerate due to weaker household income and employment rate, particularly in export-related manufacturing sectors, and elevated household debt.

Headline inflation forecasts for 2019 and 2020 are below the lower boundary for inflation targeting, due to lower-than-expected energy prices, in tandem with subdued global economic growth and the increasing energy supply.

Against the backdrop of subpar growth, the central bank's rate-setters on Wednesdayvoted unanimously to maintain the policy rate at 1.25%, Mr Titanun said.

"The unanimous vote was based on data gathered following the two previous rate cuts this year," he said.

The MPC believes the global economic outlook has started to stabilise, resulting in an improved outlook for Thai exports and economic growth next year. Nevertheless, the economy will expand below potential, Mr Titanun said.

He said the committee expressed concerns over the baht appreciating against trading partner currencies and saw the need to continue to closely monitor exchange rates and capital flows as external uncertainties brew.

The baht is the top-performing currency in Asia, up 7.6% to the US dollar this year.

The MPC will monitor the effectiveness of the recent relaxation of foreign exchange regulations to encourage capital outflows, as well as the necessity of implementing additional measures.

After the central bank's recent implementation of five measures to manage foreign exchange movements, the baht has been brought back on a par with regional currencies.

Mr Titanun said investors changed their view on the baht's movements from upward trends to two-way trends, consistent with the changing global money market and the central bank's measures.

With the record low policy rate, capital inflows to Thailand will dwindle and entice outflows from both the public and private sectors.