Exports fell for the fourth straight month in November, plunging by 7.39% year-on-year, attributed largely to lower oil and farm product prices, the world's economic and trade slowdown, ongoing trade tensions between the US and China and baht appreciation. 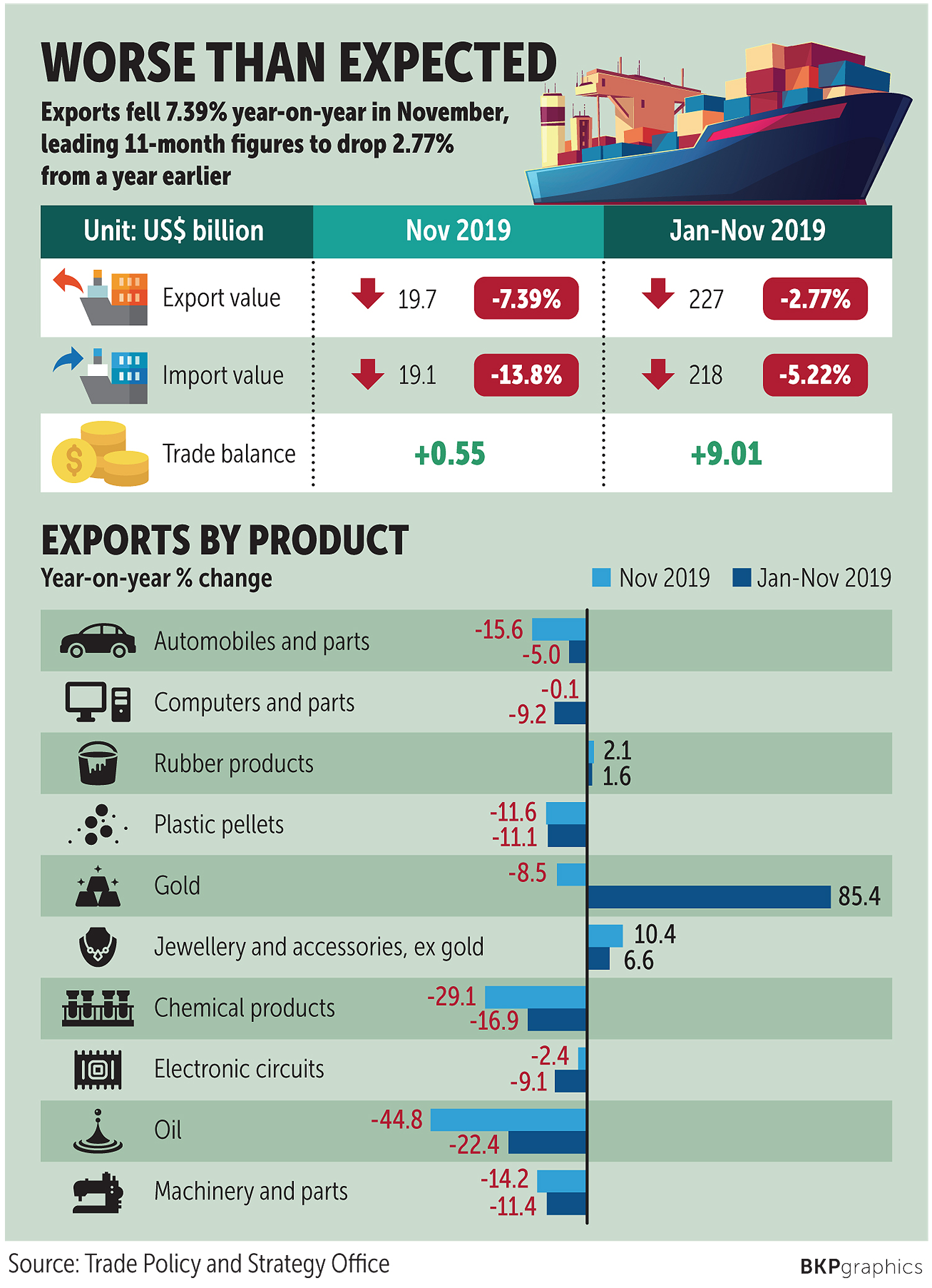 The Commerce Ministry reported on Monday customs-cleared exports fetched only US$19.7 billion in November, down 7.39% from the same month last year, after falling 4.5% in October, 1.4% in September and 4% in August.

"The global economy and Thai exports in November 2019 were clouded by a variety of challenging factors, namely trade disputes, geopolitics, and low global oil prices," said Pimchanok Vonkorpon, director-general of the Trade Policy and Strategy Office, the economic planning unit of the Commerce Ministry.

"There was also a temporary factor that dominated exports last month, as some oil refineries shut down their domestic production for maintenance and repair at the end of the year. Exports of oil and related products, which account for more than 11% of total exports, significantly declined by 27% from November last year."

Exports to most trading partners declined. However, exports to the US (excluding aircraft) expanded 1.4% and to Taiwan grew for the fifth consecutive month, by 6.5% in November. Shipments to China and Hong Kong rose by 2.3 and 2.6%, respectively.

The Commerce Ministry reported imports fell by 13.8% year-on-year in November to $19.1 billion, resulting in a trade surplus of $549 million.

Ms Pimchanok said if Thailand earns $20 billion worth of exports in December, the country's full-year exports may come in line with the forecast of the National Economic and Social Development Council and other government agencies -- a contraction of 2%.

"However, exports are in line with the global trend, which is subdued by trade tensions and other challenging factors," Ms Pimchanok said.

"Exports have a high degree of product diversification and are globally recognised as high-quality products. These key strengths will help our shipments maintain their current market position as well as expand to potential markets in early 2020.

"Moreover, it is expected that oil refineries will resume their normal production in early 2020. This should support exports of oil and related products."