Slowdown on tap for 2020
Property

The slowdown in the Bangkok condominium market this year reflects low confidence among developers and buyers alike in the country's economic situation. In addition, stricter central bank policies on mortgage lending have had a big impact on the market.

Many developers have reduced launches of new condo projects or are focusing on units priced below 100,000 baht per square metre to attract price-sensitive buyers, especially younger people making their first housing purchase.

The decrease in new supply directly reflects greater caution shown by developers. They have low confidence in the economy and in the purchasing power of Thai buyers.

In addition, purchases by foreigners are down around 40% from a year ago, mainly because of the stronger baht and sluggish economic conditions globally. Chinese buyers, the largest foreign buyer group, have almost disappeared or are showing low interest in purchases because of the weakness of the yuan (down nearly 9% against the baht this year) and the slower growth of the Chinese economy given the trade war.

Some 55% of new units launched in 2019 had sales prices below 100,000 baht per sq m, compared with 43% in 2018. Most of these units are small and priced below 3 million baht, making them attractive to young first-time workers and others with modest housing budgets.

The average sales price of condo units had been growing for the past four years, but decreased dramatically in 2019 as the number of units priced between 100,000 and 200,000 baht per sq m, previously the largest category in the market, was down significantly. But the average sales price is still 41% above what it was five years ago.

Developers will continue to focus on lower-cost units in line with economic conditions and real demand. They need to be aware that many lower-income buyers could face difficulty obtaining mortgages.

A few developers will continue to selectively launch luxury projects to diversify their revenue, as high-end buyers are less price-sensitive and will respond if a project has a good location.

Demand: The average take-up rate of all condo units in Bangkok from 2017 through the fourth quarter of 2019 was 86% for a total of 287,714 units. About 40,000 unsold units are waiting to be absorbed, but the figure is higher if unsold units in older buildings and in investors' portfolios are included.

The outlook for 2020 is similar to 2019. Buyers will have lots of choices given the amount of inventory, and may take longer to decide. Government instability and low confidence in the economy are the main factors curbing the purchasing power of Thai buyers. 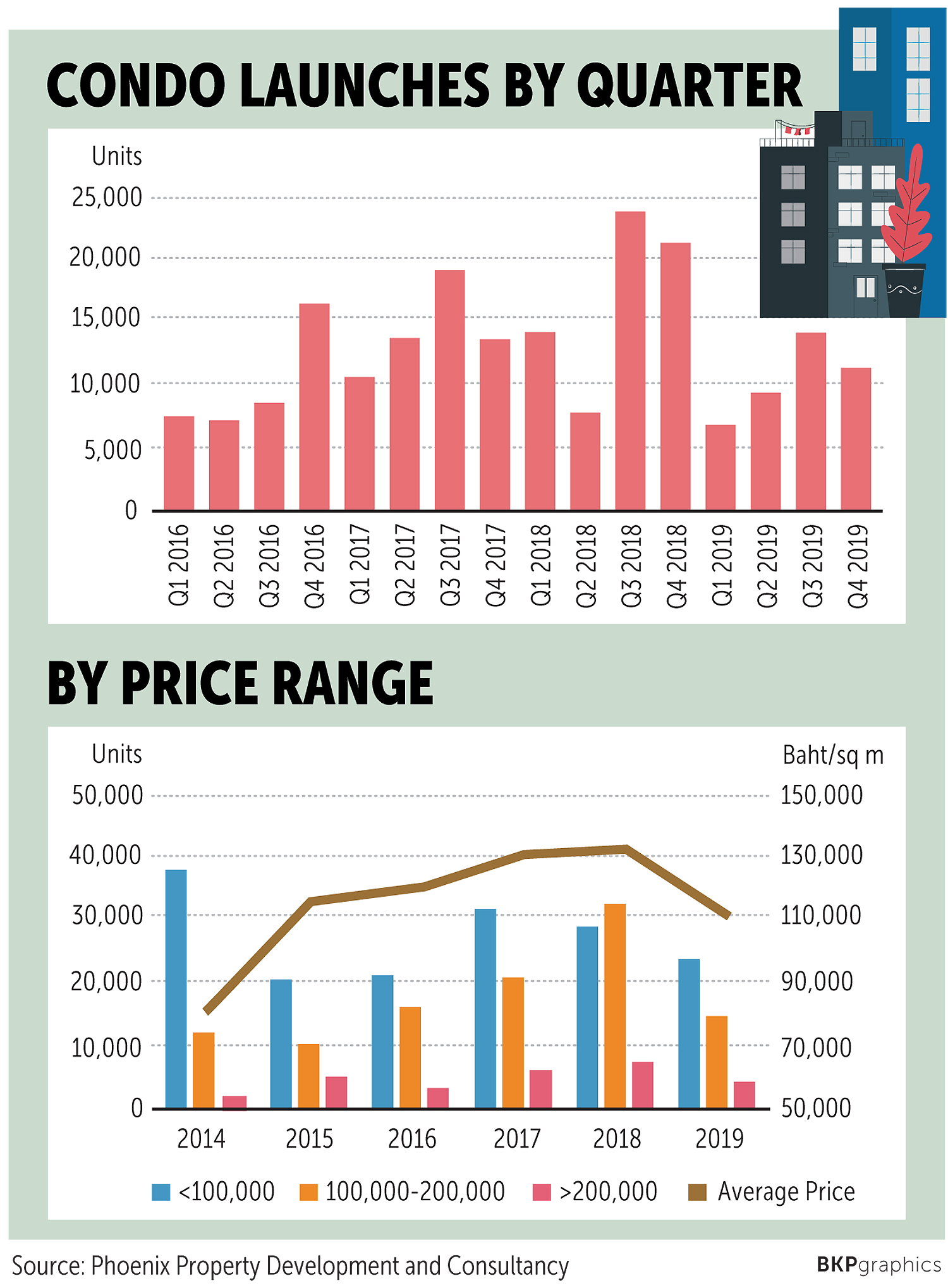 1. Many developers have reduced condo launches and are trying to sell completed projects.

3. Developers are educating buyers about how to improve their chances of obtaining mortgages.

4. Foreign buyer interest has ebbed and developers must not become reliant on this group.

6. Government stimulus policies have done little to lift demand as they do not improve purchasing power.

At least 48 billion baht will be spent to subsidise the next round of the state welfare card project for low-income earners.