Digital-driven firms shrugged off the economic slowdown and enjoyed growth

Super-apps Grab and Get are known to be the leading players whereas the overall logistics sector employs 1.2-1.5 million workers across Thailand. (Bangkok Post photo)

Despite the economic slowdown bringing various businesses to their knees this year, some segments still managed to thrive, driven by new technologies that make life more convenient.

The rise of technology and internet connectivity lets people buy whatever they want via e-commerce platforms through mobile devices. Accordingly, e-commerce has been on the rise over the past several years.

In 2019, the express delivery business entered a fiercely competitive price-cutting mode, or red ocean, stoked by a series of new players, particularly from China.

The business received a further boost from the rise of e-commerce operators, which are offering aggressive promotions to draw customer spending.

In 2020, the delivery competition is expected to intensify as Alibaba sets up a logistics facility in the Eastern Economic Corridor (EEC) that will accommodate imports from China. The inflow of these products is expected to be significant in volume and impact.

Alibaba will sell these products through e-marketplaces, raising delivery numbers.

E-commerce price comparer Priceza predicts that super-app giants like Grab and Get will join the market as demand for same-day delivery of e-commerce products keeps rising, alongside the existing food delivery services these apps offer.

Shippop, a local logistics aggregator startup, said this year's domestic e-logistics market is expected to jump 15% in value from 31 billion baht in 2018.

Mobile banking users rose to 55 million for the nine months to September from 43.5 million in the year-earlier period.

These operators have been actively increasing drop points and franchises and are driving down delivery fees. They even offer free services to pick up parcels at home and engage in cross-border delivery in Cambodia, Laos, Myanmar and Vietnam.

Kerry Express Thailand has expanded service depots to 10,000 and reportedly handles 2 million parcels a day (figure as of August).

Despite strong price competition in the sector, analysts believe pricing is not the only a factor that will ensure delivery operators' survival; delivery time and safe shipment must also be taken into account.

It's also been a marvellous year for the food delivery business.

According to Kasikorn Research Center, food delivery is expected to generate 33-35 billion baht in revenue in 2019, up 14% from the year before.

Of total revenue, 26 billion baht will be earned by small and medium-sized restaurants, 3.9 billion baht by delivery motorcyclists and the rest by food delivery apps.

Super-apps Grab and Get are known to be the leading players in the segment, which has got a boost from the so-called lazy economy.

In the first 10 months of 2019, Grab reported 120 million bookings across all services, with GrabFood as the service hero contributing a high volume of bookings.

Tarin Thaniyavarn, country head of Grab Thailand, has said food delivery apps are still in the early stages, accounting for a small portion of the total food industry.

Get Thailand, the local arm of Indonesia's ride-hailing app Go-Jek, reported 10 million trips for all services in Bangkok over the course of eight months since launching in February. The Get Food service has been a key contributor to growth. 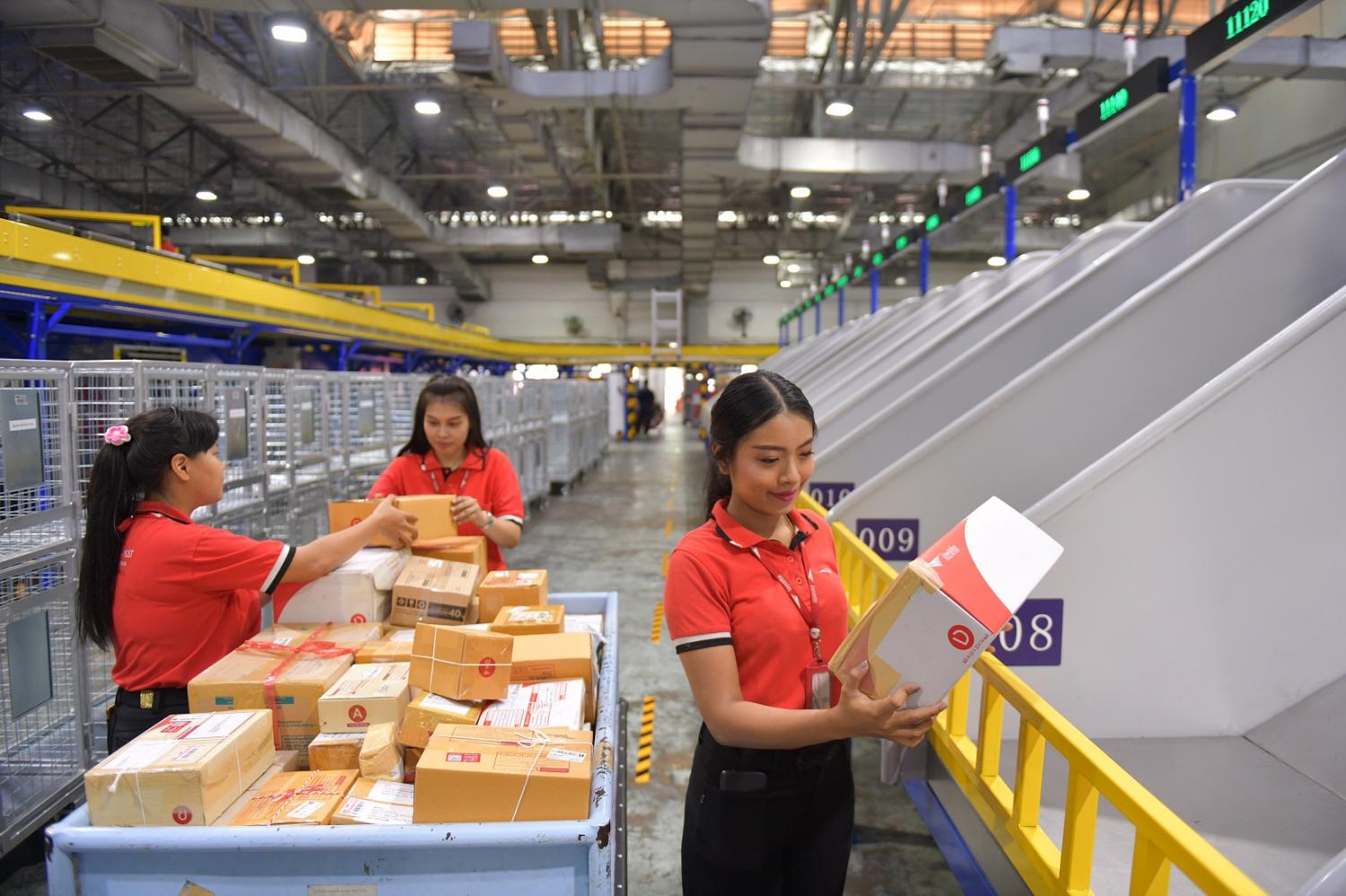 Thailand Post has enhanced its services by offering same-day delivery. The cross belt sorter shown can handle more than 6.5 million parcels a month.

The local e-commerce market continues to flourish, hoisting expectations of double-digit growth in 2019.

According to a Google-Temasek study, Thailand's e-commerce market is expected to reach US$5 billion in value this year.

These players still face operating losses as they try to court customers with strong promotional campaigns, such as 11:11 and 12:12. They are also trying to raise customer traffic to their platforms and are sourcing the necessary data to boost business.

The platforms have also come up with a new feature that lets brands open official shops on the platforms, namely LazMall on Lazada, JD Central's Official Store and Shopee Mall.

Brands are expanding sales through their own websites, social commerce and e-marketplaces. In 2020, more of them are expected to jump into online channels to reduce operating costs and reach out to customers as much as possible.

Cross-border e-commerce will be on the rise in 2020 as the major e-marketplaces supply more Chinese products on their platforms, particularly Lazada, which will capitalise on Alibaba's e-commerce tax-free zone in the EEC.

Thailand is in the pole position for social commerce in the world, with sales of goods through social media, such as Facebook, Instagram and Line, gaining momentum as Thais spend a substantial time on mobile devices and social media.

In a recent study titled "Conversational Commerce: The Next Gen of E-com" by Facebook and Boston Consulting Group, 40% of Thai respondents said they engaged in conversational commerce transactions, the highest rate among nine countries surveyed.

Some 65% said they engaged in conversational commerce (c-commerce) via social or messaging platforms. Some 75% of those involved with c-commerce said they planned to increase their c-commerce spending in the future.

The direct-to-consumer (D2C) model is expected to grow, Priceza said, as brands are gravitating towards direct sales through their own websites and e-marketplaces, bypassing dealers.

By adopting this strategy, brands will gain customer insight data, which will be a boon for personalised promotions and new product development.

According to the Thai Retailers Association, e-commerce in Thailand accounts for 5% of the total retail market.

In 2020, the e-commerce market is expected to see 20-30% growth, as opposed to the single-digit expansion of the conventional retail segment.

Electronic payment has gained trajectory in Thailand since the launch of PromptPay in early 2017.

PromptPay, a money transfer service that ties ID numbers or mobile phone numbers with bank accounts free of charge for up to 5,000 baht per transaction, even if the two parties use different bank accounts, has removed the payment pain point and complements the e-commerce business.

Banks changed the game by scrapping digital transaction fees for retail customers in 2018, expanding electronic fund transfer at point of sale through the increase in electronic data capture (EDC) terminals and the adoption of standardised QR code payment and implementing e-government services. The shift has seen digital payment grow at breakneck speed.

According to Bank of Thailand data, the number of internet banking users surged to 26.8 million at the end of September from 24 million a year earlier.

The number of mobile banking users rose to 55 million for the nine months to September from 43.5 million a year before.

Transaction volume soared to 3.24 billion for the nine months to September from 1.84 billion a year earlier, and value chalked up 16.4 trillion baht, up from 11.2 trillion baht.

Despite the sharp increase in electronic payments, cash still dominates at about 90% of payments in Thailand, presenting vast room for digital payment growth.

As going cashless picks up steam in Thailand, both policymakers and banks have an eye on expanding digital payment services abroad, particularly in Asean.

The national e-payment roadmap for 2020 prioritises cross-border payments and fund transfers, aiming to boost financial transactions via the digital platform across Asean to deepen integration of the regional bloc.

Many local banks have developed a digital infrastructure base in preparation for cross-border payments and fund transfers.

SCB, the country's biggest lender by assets and second-largest mobile banking service by users, has joined with Singapore-based partner Liquid Group to offer cross-border QR payment in Thailand and Singapore, with a goal of 200,000 transactions in the first year of operations.

Bank of Ayudhya (BAY) has introduced a blockchain solution for transferring funds between Thailand and Laos, significantly reducing the time needed to make money transfers, to promote cross-border trade. The Krungsri Blockchain Interledger facilitates transactions in both US dollars and baht to support Thai and Lao cross-border payments and trade.

BAY has also targeted Laos, Vietnam and Cambodia as its next destinations for cross-border QR code payment. The bank kicked off cross-border QR services at Tokyo's Takeya shopping centre in August.

Logistics is another business sector that's growing in line with e-commerce and delivery services.

Paitoon Jiranantarat, managing director of SCG Logistics, has said increased engagement in e-commerce by small and medium-sized enterprises (SMEs) will be a boon for the logistics sector in 2020.

"The government has a policy to encourage local SMEs to produce products that respond to potential markets and support the use of e-commerce channels," he said. "This will shore up the logistics sector with more parcel shipments.

"SMEs are encouraged to approach overseas customers, which means the logistics business may thrive as other markets step in."

The logistics sector, he said, will also take advantage of China's Belt and Road Initiative, which has the potential to accommodate investment and trade in Thailand.

Thailand's logistics sector has become a flagship industry with a value of 2 trillion baht.

"Land and sea transport makes up a large proportion in Thailand with a combined value of 1.3 trillion baht, while air cargo represents a lower proportion because of high operating costs," he said.

In 2020, the economy is expected to grow by 2.8%, weighed down by global risks, as opposed to the previous projection of 3.3% growth.

According to the central bank's projection, Thai exports are expected to rise as little as 0.5% in 2020.

According to the World Trade Organization, global trade volume is expected to grow by 2.7% in 2020, while global GDP growth is projected at 2.3%, but this depends on trade tensions easing.

With overall bearish sentiment, the e-commerce and logistics sectors are likely to suffer as well, Mr Tanit said.

"Distribution for goods and products will decrease in terms of volume as buyers delay purchasing," he said. "They will not spend too much under this economic sentiment."