A shopper puts items into a cloth bag she brought with her to a store in On Nut. The no-plastic campaign started on Jan 1. (Photo by Wichan Charoenkiatpakul)

Thailand's plastics industry, plastic reprocessors and related industries are calling for the government to provide assistance following the campaign banning plastic bags at major retailers in the country.

"The government must have a short-term measure to assist the industry, which is not ready to adjust its business to the no-plastic campaign," says Apiphop Phungchaikul, deputy secretary-general of the Federation of Thai Industries (FTI) and vice-chairman of the Plastic Industry Club.

"As a first step, the government must prescribe the type of plastic that it wants to ban and should not talk broadly or unclearly about plastic types," he said.

The FTI said many countries are banning single-use plastics, but these bans do not extend to plastic bags over 36 microns thick that can be reused.

The government announced major agreements with large retailers, plastics manufacturers and department stores signing on to an environmentally friendly campaign that prohibits handing out single-use plastic bags to customers.

Mr Apiphop said the Natural Resources and Environment Ministry has broken its promise to local plastic producers that the ban would start in 2022.

"It has shocked SMEs, which cannot afford to re-invest in new machines, and retail businesses that already ordered plastic bags from factories," he said. 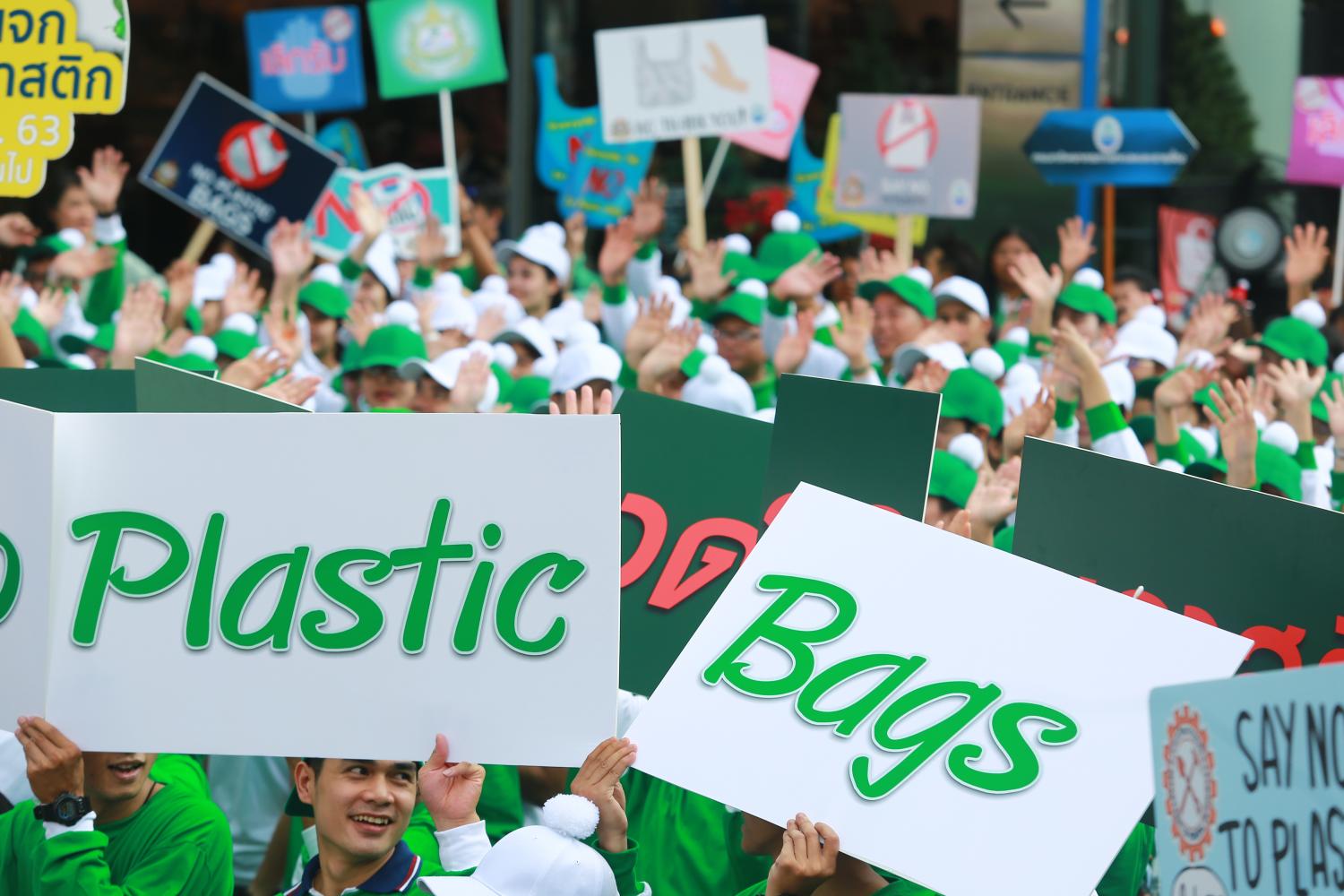 People rally at the 'Everyday Say No To Plastic Bags' campaign at The EmQuartier. The campaign raises awareness about reducing plastic waste, especially single-use bags that take a long time to decompose. (Photo by Somchai Poomlard)

The FTI has initiated talks with the Industry Ministry to support the plastics industry.

Lawson convenience stores in Thailand recently announced they would be using oxo-degradable plastic to replace its plastic bags, bags it referred to as "T-shirt bags". However, oxo-degradable plastic has been banned in many countries in Europe because of its additives which, through oxidation, lead to plastic fragmenting into micro-fragments harmful to the environment.

"These kinds of mistakes will happen in many convenience stores because they don't know which plastic type will get banned by the government, as it plans to ban oxo-degradable plastic soon," Mr Apiphop said. "The government must be clear to help businesses."

Somchai Techapanichgul, president of the Thai Plastic Industries Association (TPIA), said the campaign is hurting the plastic business in the country, especially SMEs.

"It is damaging SMEs and many companies cannot adjust to the government's campaign. They cannot afford to buy new machines to produce environmentally-friendly products," he said.

Mr Somchai said the association consists of 400-500 companies, which employ about 7,000 workers and consist of mostly SMEs that produce many plastic products to serve the needs of the domestic market, such as rice bags, sugar bags, hot-cold food bags, sanitary bags and trash bags.

The TPIA wants the government to make the announcement more clear and specify which plastic types it intends to ban.

"The government should fix the type of plastic products it intends to ban as it makes no sense to ban all types of products, some of which are still important to the end user," he said.

"Plastic bags that are more than 36 microns thick can be reused, recycled and reduced, following the circular economy initiative," said Mr Somchai.

Weerachart Kittiratanapaiboon, chief executive of Biodegradable Packaging for Environment Plc (BPE), agreed the government should help plastics converters in the short term because the business is not ready for the ban, especially SMEs.

"Many SMEs will not survive the government's campaign and they should be allowed more time to adapt their businesses, even though plastic bans are part of a global trend," he said.

Mr Weerachart's company produces biodegradable packaging from natural plant fibres and other green packaging. It stands to see a boom in demand as plastic products are phased out.

BPE produces eco-friendly food containers with its GracZ brand, which replace foam containers. It has a capacity of 2 million pieces per day. The company sells its products in Thailand and exports to more than 30 countries.