A reflected view is seen at the building of the Stock Exchange of Thailand. (Photo: Weerawong Wongpreedee)

Southeast Asian equities slumped on Wednesday, with Thailand taking the biggest hit, as investors scurried from riskier assets due to rising tensions in the Middle East after Iran fired rockets at US-led forces in Iraq.

The Thai benchmark led declines in the region and was down 1.6% - its lowest closing level in three weeks.

Financials and industrials were among the top drags on the index, with Kasikornbank Plc and Airports of Thailand losing 2.1% and 1%, respectively.

Iran fired more than a dozen missiles against at least two Iraqi facilities hosting US-led coalition personnel. However, Iranian officials said Tehran did not want a war and its strikes "concluded" its response to Friday's killing of its top general by the United States.

US President Donald Trump said an assessment of casualties and damage from the strikes was under way and tweeted "all is well".

Singapore's benchmark index recovered most of its early losses to end marginally lower. It had fallen as much as 1.7% earlier in the session.

Most investors are not expecting the situation to worsen, given that both the sides are facing pressure not to escalate matters further, said Joel Ng, an analyst at KGI Securities. "There are no reports yet of casualties on the American side, and with President Trump tweeting "all is well", it seems that it will be calmer now."

The Malaysian index ended at over a week low, weighed down by financial and consumer sectors. Public Bank slipped 2.6%, while Sime Darby Plantation lost 0.9%. 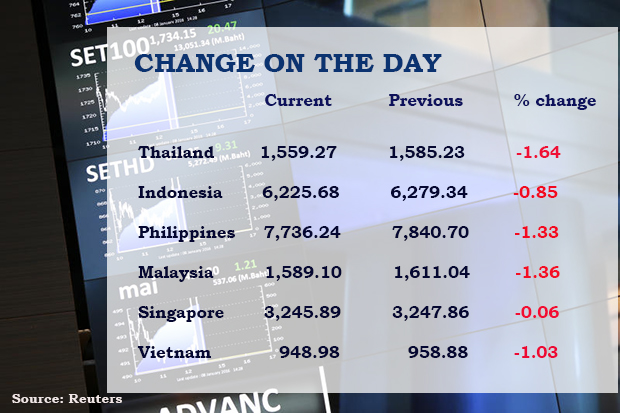 Vietnam stocks ended at their lowest in over six months, with Vinhomes JSC losing the most in the real estate sector.