Thailand needs to rev up both public and private investment, including infrastructure development as well as the promotion of the tourism and service sectors, to boost economic growth this year, Deputy Prime Minister Somkid Jatusripitak told a business seminar on Wednesday.

The central bank estimated 2019 growth at 2.5%, a five-year low, and forecast 2.8% growth for this year. Private investment has amounted to only 16% of gross domestic product, while the baht was Asia's best-performing currency in 2019, rising almost 9% against the US dollar.

"We have to stimulate private investment during this time of a strong baht," Mr Somkidsaid. "I've already talked with the customs and revenue departments, and there will be a package."

The Board of Investment (BoI) is working on the package, which will be offered to firms that must invest within six months and install equipment within a year, he added. The BoI's board will meet on the package early next month, the agency has said.

“After facing two major obstacles -- the US-China trade war that hit the country’s exports hard and a delay in the government’s fiscal 2020 budget bill that affected state investment -- Thailand is encountering a new threat: the persistently strong baht," Mr Somkid told the seminar. 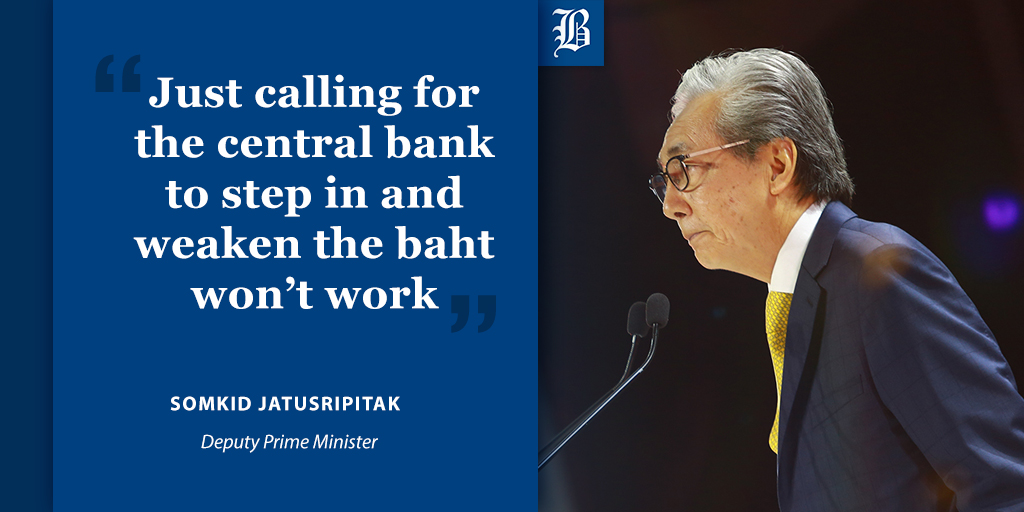 "Thailand will therefore step up state investment and planned infrastructure development, while promoting the tourism and export sectors, to offset such risks. The government also needs to promote private investment, the 5G auction process and local economic development,” he continued.

"The fiscal year 2020 budget bill, in particular, has just passed through the vetting procedure of the House of Representatives last week, causing a long delay in the government’s fiscal 2020 budget allocation. As a result, the state investment budget in the fourth quarter of last year was pretty low. Projects worth only about 50 billion baht that were already approved and signed were implemented during the fourth quarter."

Mr Somkid admitted the strong baht is a key threat to the country’s export sector, and asked local private investors to help tame the baht by speeding up their investments, particularly by importing machinery and parts.

“Just calling for the central bank to step in and weaken the baht won't work.”