Despite higher foreign tourist arrivals and rosy tourism revenue, the financial performance of SET-listed firms operating in the aviation industry has been reeling from a slew of negative factors, sending airline share prices into a nosedive across the board in 2019.

Thailand broke its annual tourism record with the arrival of 39 million international tourists in 2019, up from about 38 million logged in 2018, cementing the country's position as a favourite destination among global travellers.

Tourism revenue generated from foreign tourists also rose by 3.7% year-on-year during the first 11 months of 2019 to 1.74 trillion baht, up from 1.68 trillion registered in the same period of 2018.

These figures, however, did not translate into positive earnings for SET-listed airlines last year as all four airlines reported net profits in the red as of the third quarter.

THAI president Sumeth Damrongchaitham said such losses were normal for airlines amid fierce competition and price wars to win customers.

THAI shares plummeted by 43.4% last year amid media reports of a possible closure, which Mr Sumeth addressed later, saying his remarks were "misinterpreted".

THAI is a state-owned enterprise under the Transport Ministry. The Finance Ministry is the largest shareholder with a 51% stake in the airline together with the state-run Vayupak Fund, which holds another 15.12%.

Asia Aviation (AAV), a holding company that owns the majority of Thai AirAsia, also faced difficulties. The first nine months of 2019 resulted in a net loss worth 402 million baht, attributed to price wars in the international market and higher expenses related to airport operations and staff costs. 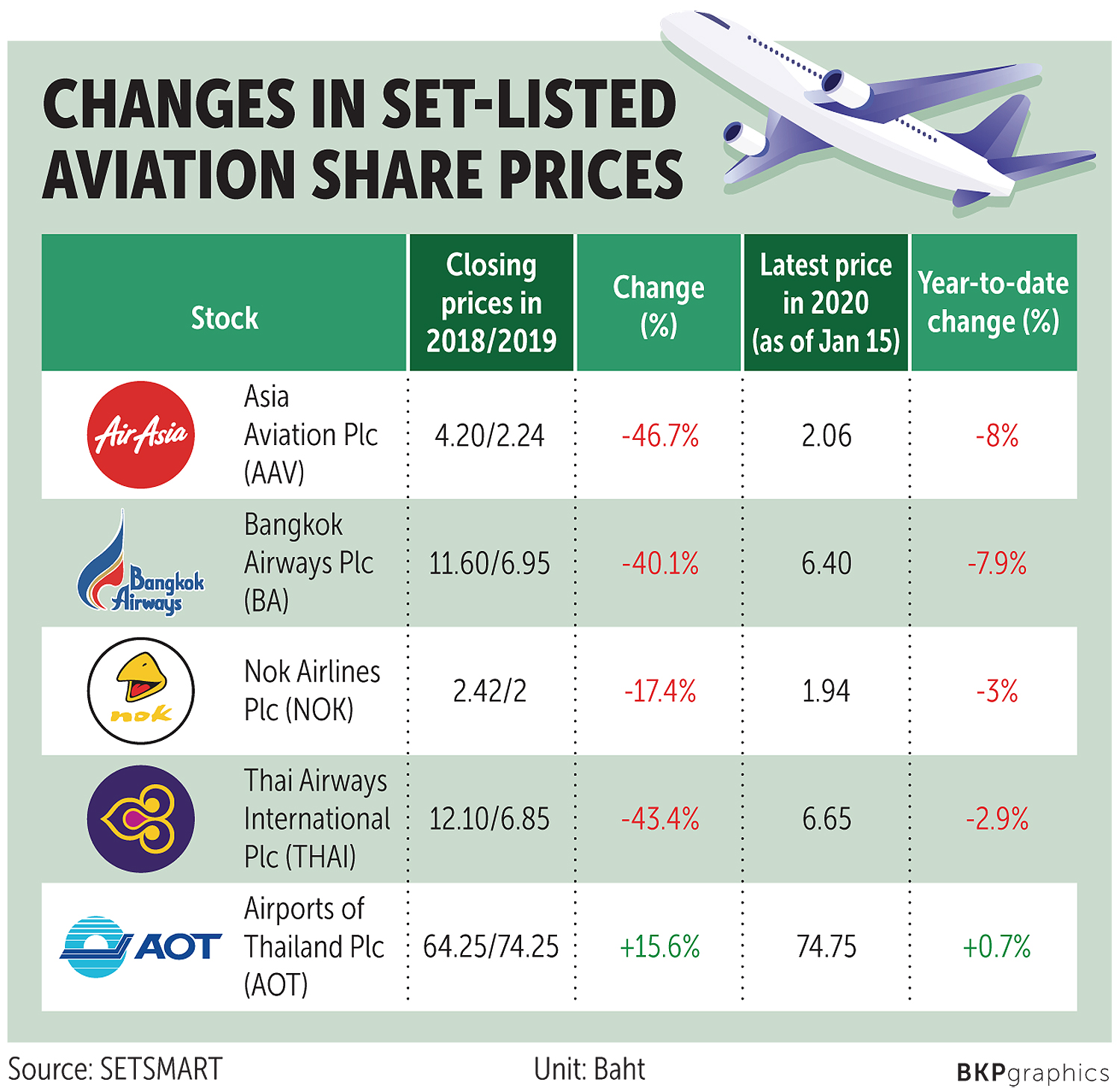 Aviation has been one of the most affected sectors in the stock market, with a sharp decline in share prices based on a streak of losses attributed to heightening downside risks, said Sukit Udomsirikul, managing director for research at SCB Securities (SCBS).

"Higher competition from low-cost airlines and lower tourism growth [compared to double-digit growth tallies in the past] were key factors shaving off profits of the aviation industry last year. Higher oil prices and the prolonged global economic slowdown have kept a lid on the industry's earnings outlook for this year," he said.

Oil prices are anticipated to have a resistance threshold at around $80 per barrel as this price is the maximum rate that business operations of the real sector can withstand, said SCBS vice-president Ekpawin Suntarapichard.

Higher oil prices will put more pressure on companies operating in the aviation industry, on top of the sluggish economic growth and fierce competition from low-fare carriers, said Mr Ekpawin.

Airline security in terms of terrorist threats poses a downside risk for airlines such as THAI because it has many international flights bound for Europe and North America, said Country Group Securities analyst Dome Kunprayoonsawad.

A 61-year-old Chinese female tourist is recovering in an isolation ward at Bamrasnaradura Infectious Diseases Institute in Nonthaburi province after her infection was confirmed on Sunday.

Public Health Minister Anutin Charnvirakul insists the virus has been contained in Thailand.

The department increased the jet fuel excise tax from 20 satang per litre, which was the rate for 24 years, to 4.726 baht per litre in 2017, an attempt to make the tax system fairer by hiking the oil excise tax for airlines to be on par with other transport modes.

Last year, many low-cost domestic carriers reported losses, with the higher jet fuel tax seen as one of the factors derailing their earnings, reported the National News Bureau of Thailand.

The losses led to some airlines cancelling certain domestic routes. The Excise Department held talks with airline representatives and fuel suppliers on the feasibility of reducing jet fuel taxes as a remedy.

"The aviation industry met last year with the Excise Department and plans to meet again soon to hear the department's response. We think the department could reduce the jet oil excise tax rate, but it would still be higher than three years ago," he said.

"This issue is the only positive factor for this industry."