Misery for rubber farmers continues into 2020

Rubber farmers are set to endure another year of low rubber prices as global uncertainty and a strong baht drive importers to turn off the taps.

The Economic Intelligence Center (EIC) forecasts a gloomy outlook for rubber prices in Thailand this year due to tepid demand from China and increased domestic supply in Thailand.

The kingdom heavily relies on Chinese consumption of its rubber with 40% of exports destined for the world's second largest economy, largely to make automobile tyres.

Chinese demand for rubber from Thailand continues to plateau on the back of worries about the trade war with the United States and cheaper imports from neighbouring Cambodia, Laos, Myanmar and Vietnam, said the research arm of Siam Commercial Bank.

The continuing upward trend of the baht has hampered the competitive advantage of the Thai product, it added.

Even Chaiyos Sincharoenkul, president of the Thai Rubber Association, admitted there was a hard road ahead in a gloomy New Year message. "The natural rubber outlook for 2020 is forecast to slow down in line with the global economy," he wrote.

As competition from neighbouring producers stiffens, Thai farmers will face a surplus of domestically-produced latex rubber this year.

Farmers planted more rubber trees about a decade ago after the price of unsmoked rubber sheets shot up to around 100 baht per kilogrammes between 2010 and 2013, compared to 57 baht in 2009, according to the Rubber Authority of Thailand. Rubber plantations were estimated to cover 20 million rai last year, up from 17 million from 2013, according to Agriculture and Cooperatives Ministry figures. 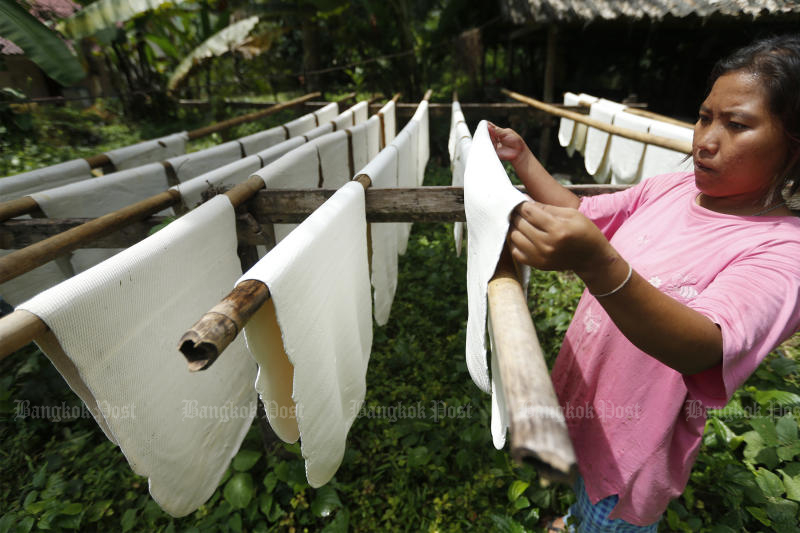 The price of the rubber sheets will be around 43-45 baht per kg -- the same level as last year -- according to the EIC projection. The price quoted by the Rubber Association of Thailand on Monday was 40.35 baht.

The low price has forced the government to give farmers a guaranteed price of 60 baht by paying them the difference over the actual price of the rubber they sell through the Bank for Agriculture and Agricultural Cooperatives. The first batch of the financial aid to rubber farmers amounted to 24 million baht, according to the cabinet report on Jan 7.

Chat Klinsampas, a rubber farmer in Palien district of Trang, complained that the price slump would have serious affected their livelihoods had the government not stepped in.

"We are in deep trouble because we have 'social taxes' to pay when we go to ceremonies like funeral rites and wedding events," he said on Jan 7.

Suthee Jila, a farmer in Muang district of Trang, lives with uncertainty over whether the government aid will continue this year as he has to share the income with two other family members.

He called on the government to find ways to boost the rubber price over 50 so that farmers can survive without help from the state.

"Farmers have to spend more when the price of staple foods keeps going up," the farmer said.