The Stock Exchange of Thailand index slumped on Monday amid concern China's ban on all group tours would damage the vital tourism industry, adding to the problems of a struggling economy.

Tourism is a key driver of Thai growth and a bright spot in Southeast Asia's second-largest economy, which is growing at its slowest pace in years. Chinese tourists are Thailand's biggest source of visitors.

The SET index slid as much as 3% to its lowest in more than three years, with Airports of Thailand Plc (AOT) down as much as 6% to a more than seven-month low, and Minor International Plc (MINT) sliding as much as 9%.

"It's a combination of factors," said Natapon Khamthakrue, a strategist at Yuanta Securities (Thailand), citing the virus and the delayed government budget bill among them.

"These mean there is no hope now," he said. "We had expected the budget to help the economy and tourism to grow".

China has halted all group tours from Monday, as it seeks to curb the spread of a deadly virus. Thailand on Sunday confirmed an eighth case of the virus. 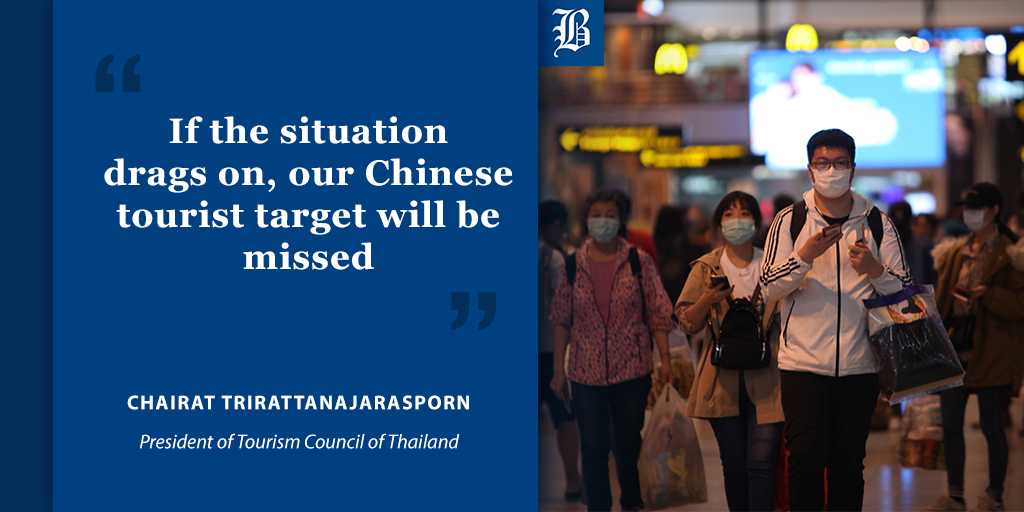 "This is a big deal. I think about 90% of Chinese tourists will disappear each month," Chairat Triratanajaraspon, president of the Tourism Council of Thailand, told Reuters.

"If the situation drags on, our Chinese tourist target will be missed," he said.

The council earlier predicted about 11 million Chinese tourists this year, after 10.99 million in 2019.

In 2019, Chinese tourists accounted for 28% of overall foreign tourists, and their spending was 544 billion baht.

Charnon Boonnuch, an economist at Nomura in Singapore, said the virus outbreak could be another downside risk to his economic growth forecast of 2.7% this year, a sluggish recovery from a forecast of 2.5% in 2019, a five-year low.

However, Deputy Prime Minister Somkid Jatusripitak said he expected the coronavirus would have only a short-term impact on tourism, as China should be able to handle the situation.

"Investors should not panic. Take it easy," Mr Somkid said. "Do believe that our economic fundamentals are still good".