Employees work on the assembly line to make protective masks at a factory operated by Dasheng Health Products Manufacturing Co. in Shanghai yesterday. People across the globe are stockpiling facial masks to protect themselves from the new coronavirus.

As the spread of the new coronavirus in China causes more factory shutdowns, the effect on global industrial supply chains could linger for years.

China now makes up more than twice the share of global merchandise exports it did in 2003, when the SARS virus hit. Guangdong province alone exported more in 2018 than China did as a whole 17 years ago.

Manufacturers already gripe about the effect of the Lunar New Year holiday, which falls in January or February, on their business as Chinese factories shutter. But the public health response to the virus this year effectively means extending the holiday. China's industrial output could be running at a similarly low level for a much longer period.

Chinese industrial production in January and February is more than 20% lower relative to the average of the other 10 months of the year, a consistent pattern over the past decade.

Workers vary in the amount of time they take off. But even assuming the average worker takes a longish full two weeks, that would mean industrial output during and immediately around the holiday is running at roughly a fifth of its normal potential, based on the 20% shortfall for the whole two month period. 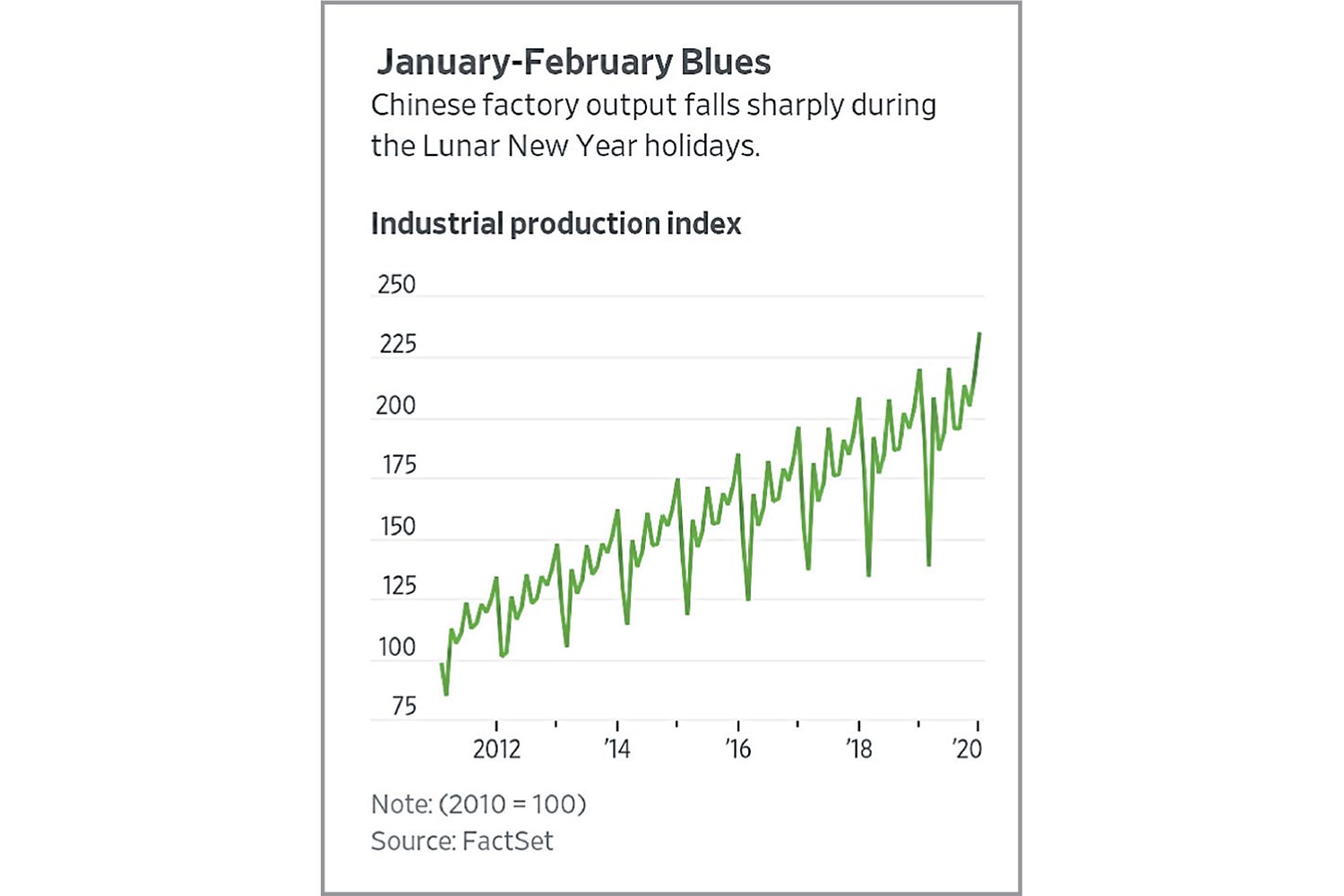 Moreover, it is not just China's size that makes it important. Global supply chains are considerably more complex than they were in 2003, shortly after China's accession to the World Trade Organization. Even manufactured items with a very marginal quantity of Chinese content will be affected as production is halted, and the increasing complexity of products means replacing specialized manufacturers is difficult.

Evidence from previous unexpected supply shocks is discouraging. General Motors shuttered U.S. and European plants after earthquakes in Japan in 2011 and again in 2016 because vital parts that couldn't be easily found outside Japan suddenly became unavailable. Floods in Thailand in 2011 forced long-lasting changes to supply chains, even after immediate effects had dissipated.

Research published in 2015 suggests that as much as 60% of the total economic impact of Japan's 2011 earthquake in terms of value added was borne by other countries, with 25% carried by the U.S.

The International Monetary Fund has drawn attention to the particularly steep impact of so-called risky imports: items such as complex machine and vehicle parts, hard drives and certain electrical items that are particularly vulnerable to supply shocks. For every 1% increase in such risky imports from a country which suffers a natural disaster, there is a 0.7% fall in the importer's exports during the same year.

Many international economists have tried to establish how much a dip in China's economy would reduce global output. But such analyses largely focus on the demand impact, not supply chain disruptions.

The current lockdown is of a scale beyond either SARS, floods in Thailand or the earthquakes in Japan. China's industrial heft leaves global manufacturers in a quandary with no obvious parallel, even with shutdowns only just beginning. The impact may be felt for years to come.