Vendors complain that their incomes have dropped by up to 70% after China announced bans on group tours. This photo was taken at the Erawan Shrine.

Thai tour operators are weathering the storm after China imposed travel restrictions on group tours until late next month in a move to control the spread of the novel coronavirus, which the World Health Organisation has declared a global emergency.

China sealed off Hubei's capital Wuhan to stem the epidemic, which is believed to have originated from a local market selling bushmeat, and has extended the measure to other cities nearby. Though independent travellers are allowed to leave, many have cancelled their plans to reduce the risk of contracting or spreading the deadly virus, which is contagious during the incubation period.

Thailand, meanwhile, has suspended flights from Wuhan and other high-risk cities. A commercial flight will leave on Tuesday to bring Thai expats back from Wuhan, Public Health Minister Anutin Charnvirakul said, adding he will also call on the government to consider scrapping visa-on-arrival for Chinese tourists.

However, Yuthasak Supasorn, governor of the Tourism Authority of Thailand (TAT), lamented that the outbreak has prompted a sharp drop in the number of Chinese tourists. He added he expects the number of Chinese arrivals to drop by as much as 80% to just 2.32 million in the first four months of the year, causing an estimated 98 billion baht in loss of revenue.

Meanwhile, Thanavath Phonvichai, president of the University of the Thai Chamber of Commerce, estimates the outbreak will cost the country 132.8 billion baht in lost tourism revenue and income from imports unless it is brought under control by March.

Lertsak Ponklin, vice-president of the Phang-Nga Tourism Association, said the travel ban has taken away up to 70% Chinese customers from local tour operators. "With direct flights from Wuhan to Phuket being suspended, tour companies catering to Chinese nationals have had to shut down temporarily.

"[However], if the situation persists for too long, I think they might have to lay off some workers. At the moment, there are still tourists from Europe and Scandinavia," he told the Bangkok Post.

Mr Lertsak, who also manages a local tour company, said he has urged the government to step up screening measures at airports.

"We are also monitoring each and every customer. For instance, my company is checking customers' body temperature and handing out surgical face masks at the pier. I think we can work on boosting tourism once the outbreak is brought under control," he said.

With the outbreak fuelling anti-Chinese sentiment in many countries, such as South Korea, Japan and Denmark, Mr Lertsak offered moral support, saying precautionary measures can be taken without discriminating against an entire population. "If the virus had broken out here, we would not be happy carrying the stigma," he added. 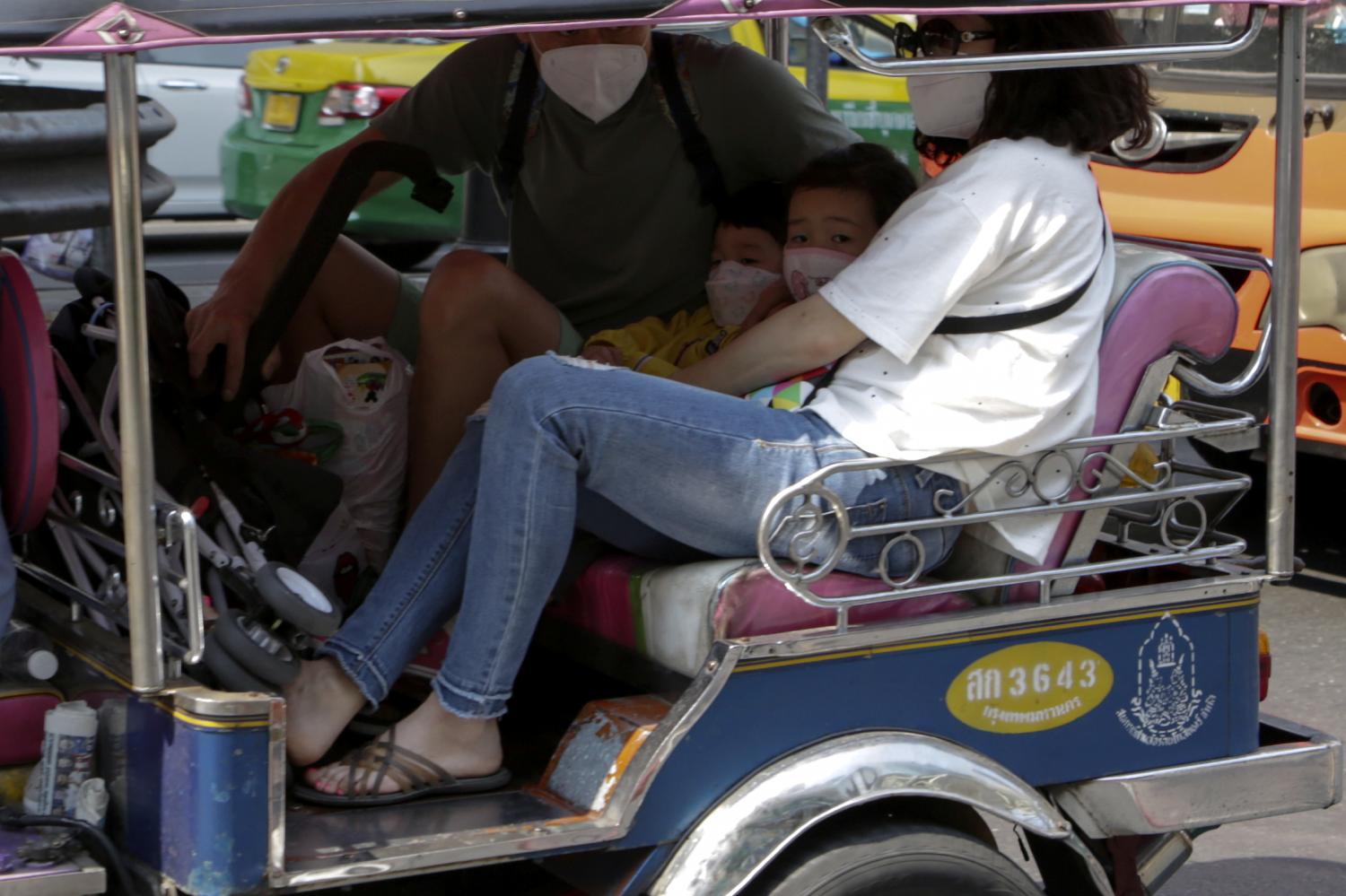 COVERING UP: A family of Chinese tourists protect themselves against pollution while taking a tuk tuk ride in the Ratchaprasong area in Bangkok.

"More than 700 Chinese-language tour guides in Chiang Mai are now without a job. More than 300 tour buses are on layby. I want the government to help because there is no income," he said.

Meanwhile, the owner of a cosmetic store at Bangkok's Bazaar Hotel Ratchadaphisek spoke to the Bangkok Post about a sharp drop in Chinese customers. "I am thinking about giving my staff a one-month break because there are very few customers. This may extend to three months if this continues," she said.

She also deplored the government's lack of speedy action in addressing the problem, an issue that has given rise to a public backlash on social media. "I wish they would step up screening measures at airports to curb the outbreak, and communicate better to reassure the public," she said.

The 800-room hotel usually accommodates Chinese nationals on group tours, as well as some Taiwanese and Indian travellers.

Vendors at the Ratchaprasong intersection have also been hit hard, as the iconic Erawan and Trimurti shrines have seen a sharp decline in Chinese tourists.

Florist Nop Phromporn said her income has dropped by 70% since China ordered a lockdown on Wuhan and banned group tours. "The point is they don't allow the uninfected to enter the country either. I think they should step up screening measures at airports rather than impose travel restrictions, otherwise our already stagnant economy will worsen," she said.

Ple Sinsoontornsap, another florist, said the impact of the outbreak has dampened the mood at the shrine -- which is usually a hive of activity during the Lunar New Year period. "My income has dropped by 60%. It is worrying, but I can't do anything but accept it," she said, as she called on the government to start handing out protective gear because stores are running short of them.

"People are hoarding masks and some are reselling them for as much as 90 baht per piece. I think the authorities should look into this matter," she said.

Lek Tarawut, a florist at the Trimurti Shrine, said his sales have dropped by 70% because 90% of Chinese tourists are not around. "I don't know how to solve this problem," he said.

Other cities that rely on tourism, such as Chiang Mai, Chiang Rai, Phuket and even Pattaya, are also bearing a heavy load as the lack of Chinese travellers is painting a dull picture.

"Chinese group tours to Chiang Mai are now 100% gone," he said, referring to the impact of Beijing's ban on outbound group tours.

According to Mr Manop, though 60% of Chinese visitors in Chiang Mai are free independent travellers, the disappearance of 40% of other travellers who arrive as part of groups is huge enough to deal a severe blow to local businesses.

Hoteliers in Chiang Mai and Pattaya are losing badly due to cancellations, while 2,000 tourist guides in the North are watching to see what happens next.

"These guides have had no jobs since Friday," Mr Manop said, adding a similar impact is also being felt by coach drivers who have had to leave their 250 buses which were one packed with Chinese tourists, stand idle.

If the deadly respiratory virus cannot be tamed or eradicated by March, the tourism industry, which depends largely on Chinese arrivals, will remain bearish in the second quarter, Laiat Bunsithong, chairwoman of the Thai Hotels Association's northern chapter, said.

Like Chiang Mai, all tourism-related businesses in Phuket are also affected, with a dive in hotel guests and bus drivers left unemployed. More than 300 tour buses in Phuket have been standing idle for more than a week now.

"With no [Chinese] tour groups, we have no jobs and no money," said one tour bus operator who declined be named.

"The coronavirus has had a greater impact on our tour-bus business than the [Phoenix] boat disaster and the tsunami," another Phuket bus operator said. 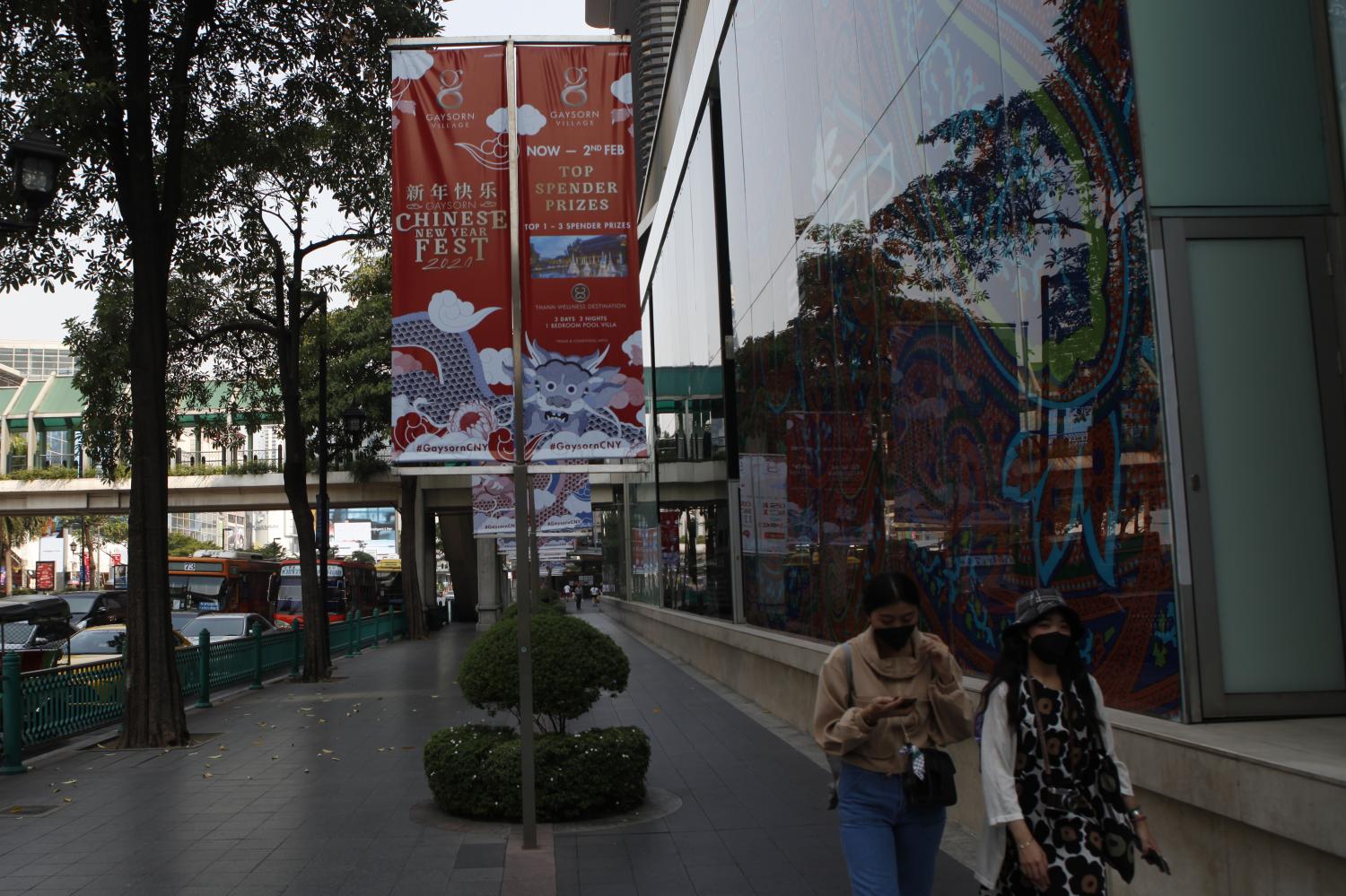 EMPTY BOULEVARD: People stroll near Gaysorn Village at the Ratchaprasong intersection. The area is usually crowded with tourists and shoppers.

Chinese tourists in Phuket are also worried about the outbreak, saying the health impact alone is disastrous, not to mention its economic aspect.

"Sichuan faces the most national disasters in China, but they seem less severe when compared to what Wuhan is suffering," said Peng Ziyun, a 50-year-old Chinese traveller from Sichuan province.

Tourism operators and university scholars admitted that anxiety over the virus may lead some people to avoid interacting with Chinese tourists, but they should not let this affect their friendliness and hospitality.

"Thais should not exaggerate their fear and show a dislike of Chinese tourists," Mr Manop said, adding Thais must not forget they are good hosts.

China allowed its people to start travelling overseas in 1991, and "Thailand is one of their dream destinations," he said.

Zhang Pei, a Chinese-language lecturer at Chiang Mai University, said it was understandable that people want to protect themselves at this time, but they should base their actions on reliable information.

She added she cannot change people if they see her as a person from a "risk group".