Takorn Tantasith (second from right), secretary-general of the National Broadcasting and Telecommunications Commission, on Sunday announces the results of the 5G multiband licence auction. (Photo by Wichan Charoenkiatpakul)

Around 100 billion baht was raised in the 5G multiband licence auction on Sunday with leading mobile operator Advanced Info Service (AIS), through its subsidiary Advanced Wireless Network (AWN), grabbing almost half the 49 licences of three spectra put up for auction.

The National Broadcasting and Telecommunications Commission (NBTC) auctioned off 700-megahertz, 2600MHz and 26-gigahertz ranges in that order from 9.30am.

Only the 700MHz licences were heavily contested through 19 auction rounds for three licences.

A combined 51.4 billion baht was raised from the auction of the three licences on the range, a process which lasted almost two and a half hours.

The sum is almost double the combined reserved prices of the three licences.

The bidding lasted 19 rounds before the hammer fell, with the final price per lot (licence) at 17.15 billion baht.

The 19 licences in the 2600MHz range were auctioned through two auction rounds with a combined winning price of 37.43 billion baht.

The final price on the range reached 1.95 billion baht per licence after a 40-minute auction, which started at 12.50pm. The sum is around 5% higher than the reserve price.

Lastly, 11.62 billion baht was raised from the 26GHz range auction, which began at 2.30pm and lasted only 10 minutes.

A total of 27 licences were offered by the NBTC on the range with a reserve price of 423 million baht per licence and bid increments of 22 million baht each round.

The range's auction ended in the first round when the participants bid on only 26 out of the 27 available licences. The hammer fell on a price of 455 million baht per licence. 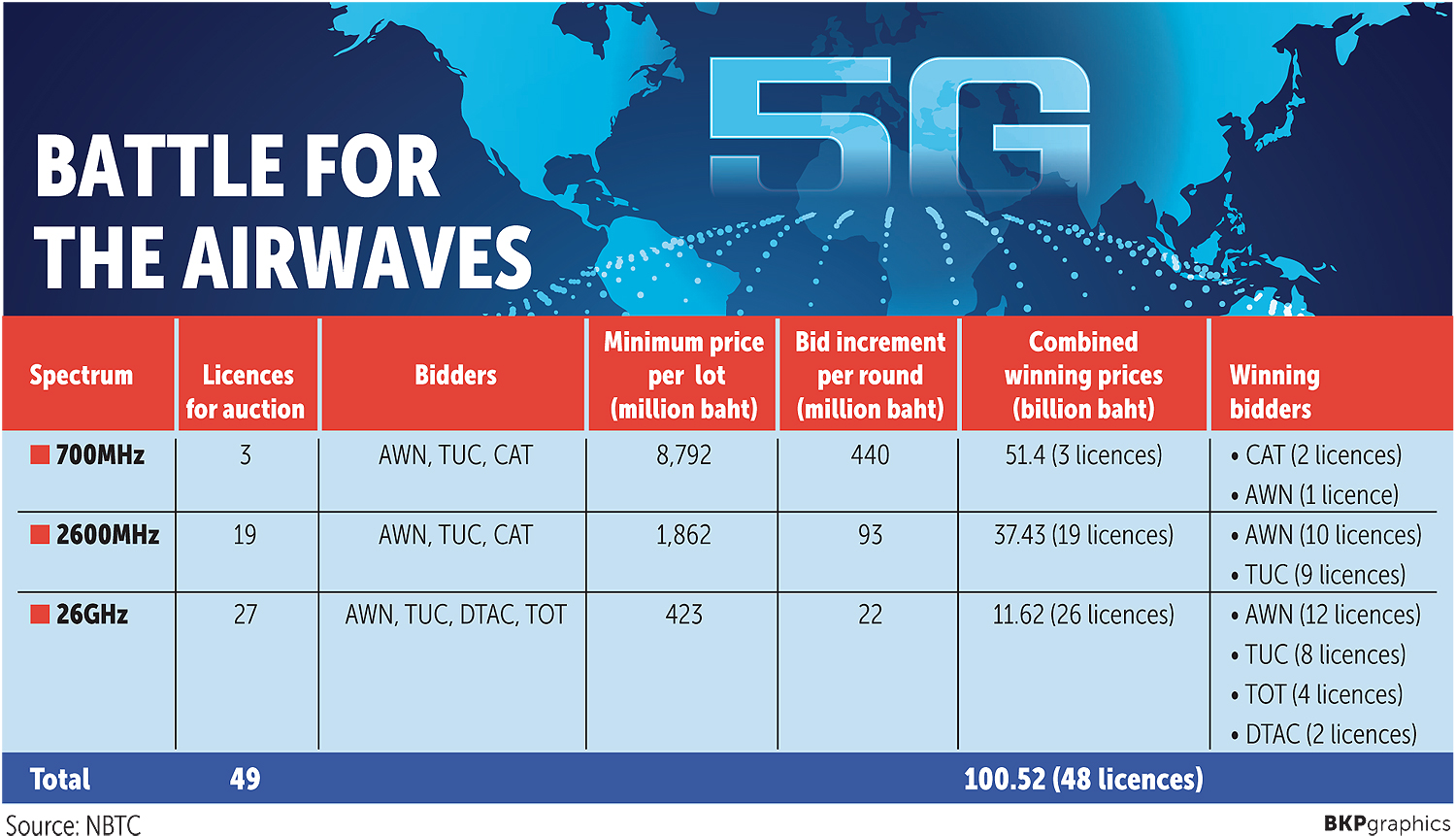 It was trailed by TUC, which earned 17 licences in total, nine of which were from 2600MHz range and the rest from 26GHz band.

TUC failed to grab any licences in the 700MHz range.

CAT president Sanphachai Hunanandana said snaring two licences in the 700MHz range is an important win for the company as it could help reduce its investment in cellular cell sites, compared with obtaining only one slot, which contains 5MHz of bandwidth.

He said the 700MHz range is also regarded as a backbone network capable of transmitting broader signals than higher bands.

"CAT will use the range for 4G service and prepare to use it for 5G service in the future," said Col Sanphachai.

CAT, he said, aims to provide service as an infrastructure sharing provider too.

Sharad Mehrotra, CEO of DTAC, said the company's acquisition of the high-band 26GHz spectrum would be a welcome addition to DTAC's portfolio of mid and low bands.

"With the acquisition of 26GHz spectrum, we now have access to low, mid- and high-band spectrum to provide our customers with the best data experience in the future," Mr Mehrotra said.