The government looks poised to introduce a fresh economic stimulus package after the economy slipped to a five-year low in growth last year and a possible contraction in the first quarter of this year.

Finance Minister Uttama Savanayana, on a trade delegation to Japan chaired by Deputy Prime Minister Somkid Jatusripitak, said the ministry is preparing a new round of economic stimulus covering tourism, consumption and investment to be proposed for the cabinet's approval by the middle of March for implementation in April.

The tourism sector employs millions and has been ravaged by the coronavirus outbreak, he said.

He said state investment and 2020 budget disbursement need to be accelerated to help boost the country's fragile economy.

The economy grew 1.6% year-on-year in the fourth quarter, decelerating from a revised 2.6% growth in the third quarter of 2019.

For production, the agricultural sector decreased mainly because of a reduction in major crop yields. The non-agricultural sector also decelerated as a result of a drop in the industrial sector, while the services sector continued to increase.

Seasonally adjusted GDP growth expanded by 0.2%, on level with the third quarter of 2019.

"Key risk factors that weighed on the economy in the fourth quarter and the entire year were falling exports and a sharp drop in public investment because of the delay in the passage of the budget for the 2020 fiscal year," said Thosaporn Sirisamphand, the NESDC's secretary-general. 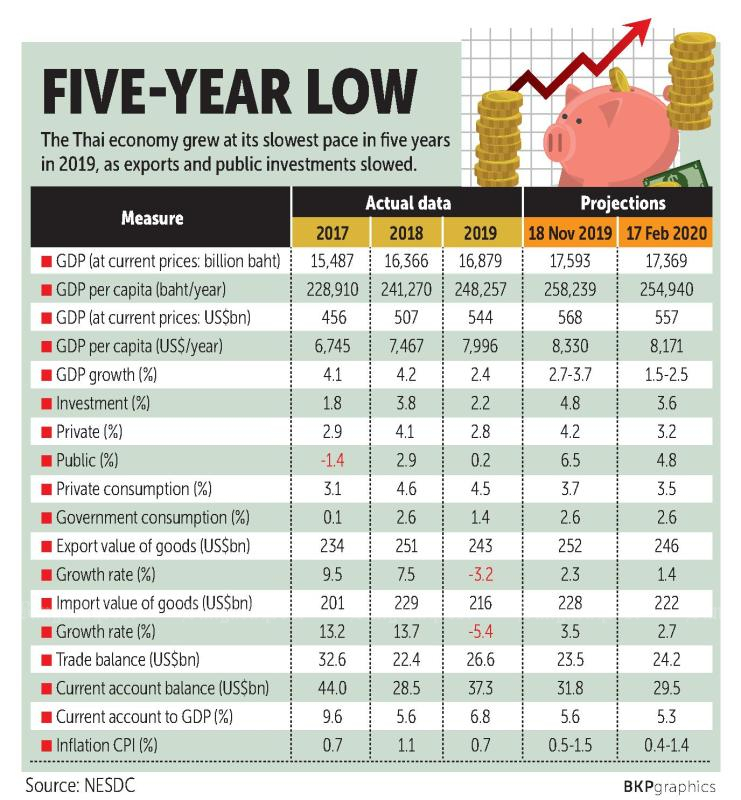 Wichayayuth Boonchit, deputy secretary-general of the NESDC, said the impact from the coronavirus outbreak and delayed 2020 fiscal budget could lead the country's economy to contract in the first quarter, but the figures are likely to recover in the second quarter once these factors were addressed and improved.

Lavaron Sangsnit, director-general of the Fiscal Policy Office, said the Finance Ministry is closely monitoring the economic situation and is ready to implement additional stimulus measures if needed.

The coronavirus outbreak is battering tourism, lowering the number of foreign visitors, particularly from China, for the January-to-March quarter, he said.

The Finance Ministry has already offered tax relief measures for tourism operators including a twofold tax deduction for expenses incurred from holding domestic seminars and training session along with a 1.5-times tax deduction for the renovation expenses of accommodation operators.

He said the economy's fundamentals remains strong, as indicated by subdued inflation, the current account surplus and low public debt at 41.3% of GDP.