To ride or not to ride? This is a much-heard question when it comes to tourism activities centred on the elephant -- an animal once emblazoned on Thailand's national flag and a recognised symbol of the nation for centuries.

Riding on a jumbo has been rated as a once-in-a-lifetime experience for many tourists when visiting Thailand. But behind the curtain, such activities are facing ethical challenges with regard to the well-being of the elephants.

According to the Department of Livestock Development, some 223 elephant camps exist in the country. A 2017 report of the Asian Elephant Range States Meeting estimated the number of captive elephants in Thailand at 3,783.

Animal welfare has become a topic of heated discussion among tourists and related stakeholders. The ongoing debate revolves around treatment guidelines for elephants, and whether such rules should comply with local practices or the recommendations of non-governmental organisations (NGOs).

Thailand received a poor score, 4.6 out of 10, on elephant welfare conditions at tourism venues, according to a World Animal Protection report from 2017.

The report said conditions in Thailand were worrying, with almost twice the number of elephants used for tourism here than in all other Asian countries combined.

The list of unacceptable activities included contacting or feeding elephants without a barrier, visiting unlicensed zoos, and shooting photos with wild animals that have been captured. 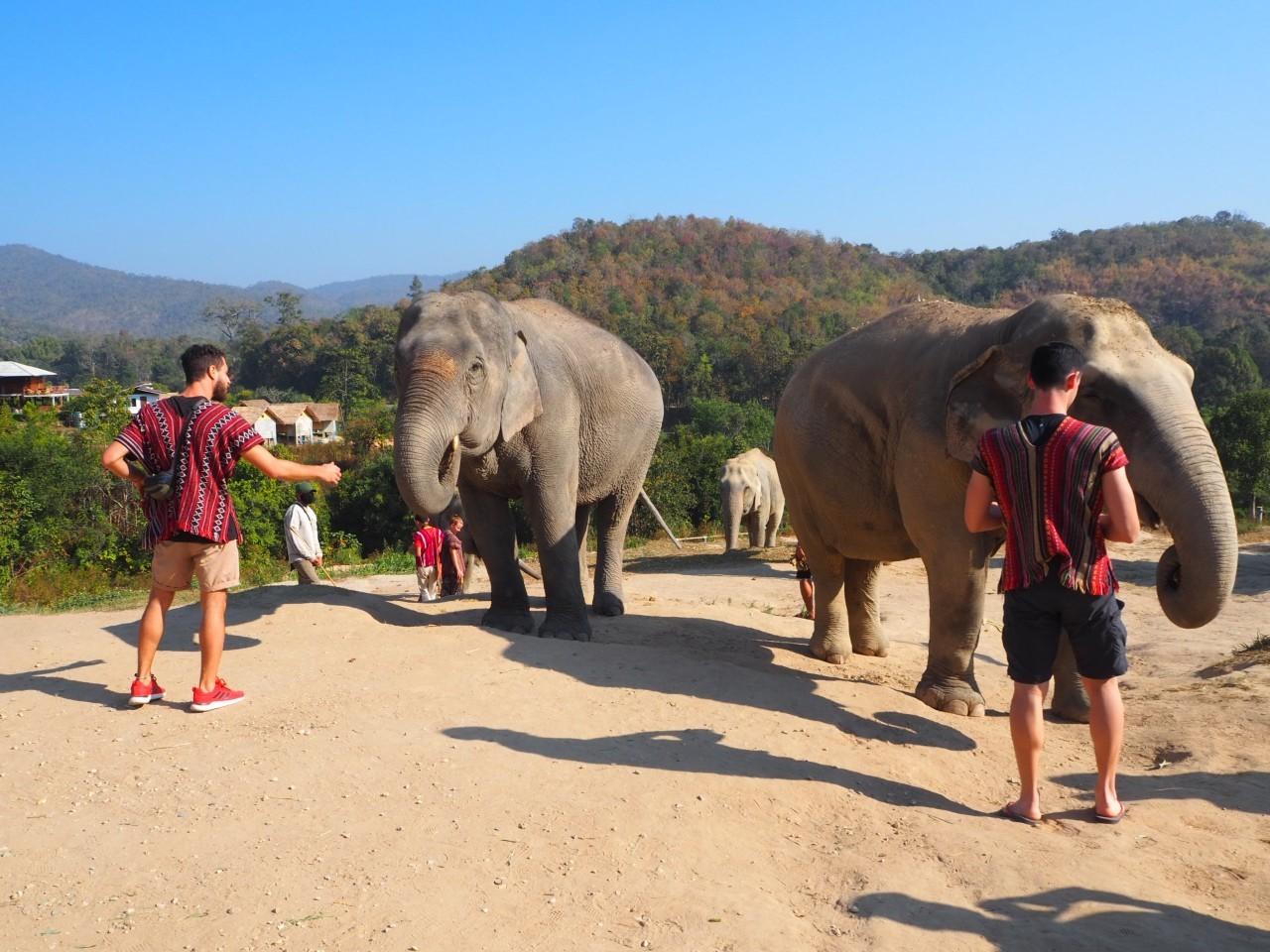 While the reputation of Thailand as an ethical tourism destination is worsening, a new tourism segment based on elephant healthcare is fleeing from that shadow.

The activities under elephant healthcare are harmonised with the necessary physical improvement of the elephants. Walking in the wild under the care of a mahout provides an opportunity to get exercise and receive proper nutrition from natural sources, said Theerapat Trungprakan, president of the Thai Elephant Alliance Association and owner of Patara Elephant Farm.

According to Mr Theerapat, a lack of communication is a pain point for Thailand's elephant tourism, which needs to spread awareness of different perspectives, especially the achievement of local experts in elephant care.

The country must also carry out more research to let the proven facts speak, he said.

"We have to bridge an understanding between foreign tourists and local practices, persuading them to realise the benefits of ethical tourism for the well-being of elephants in the long run, which can also support the living of the people involved," Mr Theerapat said.

He shared his own belief that enclosure systems using electric or concrete fences, which according to him are supported by certain European NGOs, are the wrong approach.

With the enclosure practice, he said, elephants have to wait for food from tourists, eventually leading to poor body condition and other health problems caused by insufficient exercise.

"The successful reproduction rate of elephants under local practices proves that our way is the most appropriate way to treat elephants," Mr Theerapat said.

Of the 19 reproduction cases in the past two years in Chiang Mai, eight cases of elephant calf deaths were from mothers living in enclosure systems.

Research on levels of cortisol, considered a stress hormone in elephants, showed that domesticated elephants trained with mahouts have less cortisol compared with elephants without human interaction and living in a limited space, Mr Theerapat said.

The Elephant Alliance Association is promoting Thai elephant tourism through media trips in the hope that people will keep an open mind about different ways to take care elephants.

Mr Theerapat's ambition is to position the elephant tourism and veterinary services of Thailand as the global leader.

Taweepoke Angkawanish, head of elephant conservation at the National Elephant Institute, said elephants sent to the institute's rehabilitation programme -- whether by donation or confiscation -- are trained to build relationships with mahouts if they cannot live in herds, in order to increase their chances of survival.

The institute, located in Hang Chat district of Lampang province, has 111 elephants under supervision. Its mission is to rehabilitate them by offering veterinary care, training and proper mahouts.

Trainee elephants at the institute serve as assistant therapists for children with special needs as part of a project run by the faculty of associated medical sciences at Chiang Mai University.

Mr Taweepoke said wild elephants deserve to be in the wild, but domestic elephants need proper training to live in harmony with humans, using traditional knowledge of elephant care -- a legacy handed down through the generations. 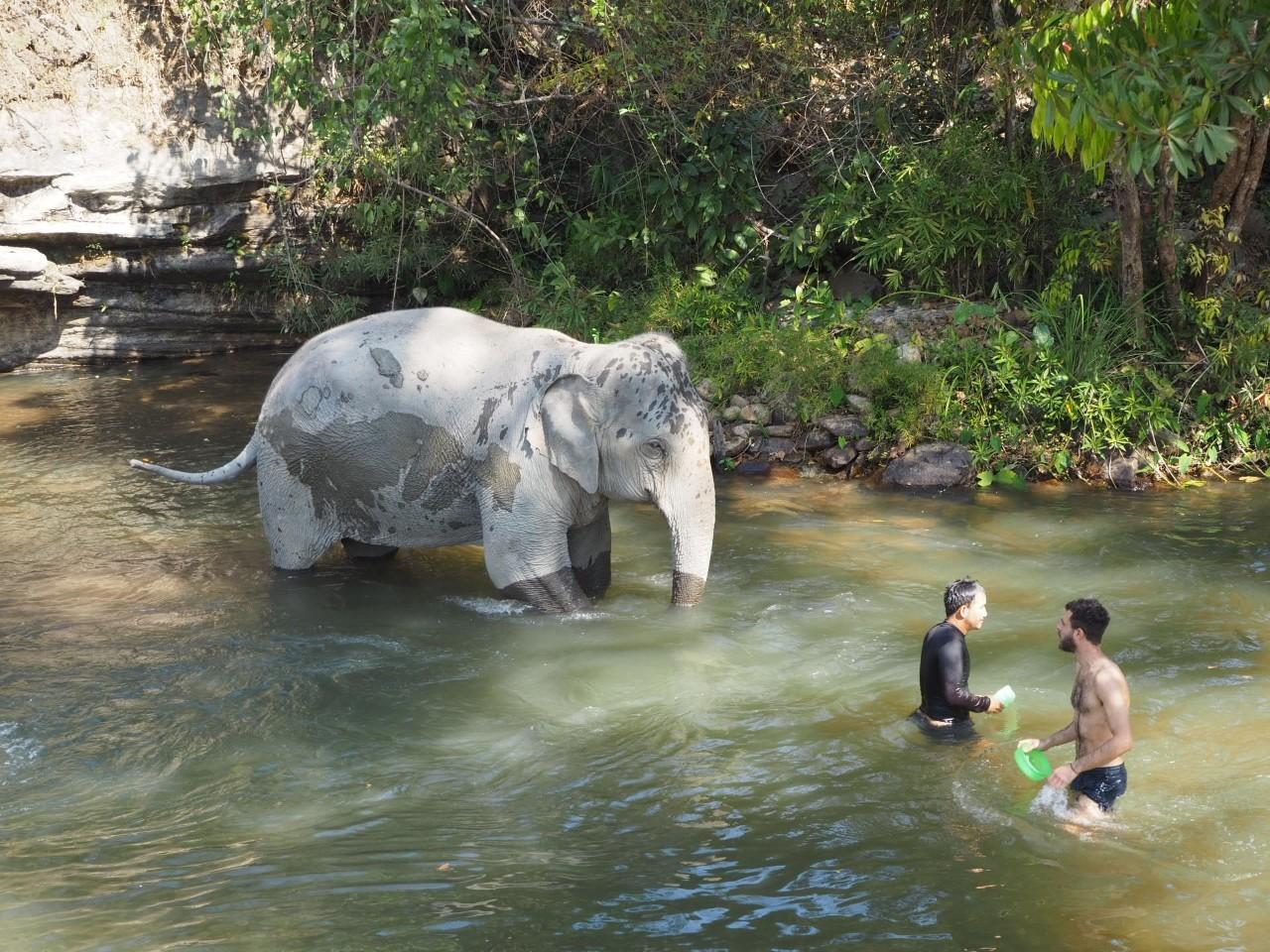 Bathing with a new friend at the Elephant Jungle Sanctuary.

In order to cope with critics of elephant abuse in tourism, the Tourism Authority of Thailand (TAT) has come up with strategies to help mediate on the issue.

The TAT will rely on facts when collaborating with NGO networks, travel agencies, elephant camps, mahouts and local communities.

The agency is promoting elephant care tourism to improve elephant and human welfare, dismissing what it calls misperceptions about elephants that could lead to a negative image of tourism in Thailand.

"We will not point the finger and say what is right or wrong, but we will introduce the other side of a story which is rarely known regarding elephants in the tourism industry," said Srisuda Wanapinyosak, deputy governor of the TAT for Europe, Africa, the Middle East and the Americas. "Believe it or not, the tourists will have to decide for themselves."

There are three categories of elephant camp operators in Thailand: camps for observation purposes only, non-riding camps that allow other activities, and elephant riding camps.

If any camp complies with elephant care tourism practices, the TAT will support its marketing and communications.

Over time, many elephant camps try to adapt themselves by cancelling entertainment shows conducted in a way hostile to the natural behaviour of the animal.

Tia Pirhonen, a traveller from Finland who visited the Elephant Jungle Sanctuary in Chiang Mai, said she did some research before deciding to experience the place. Her hope was to get a better understanding about the elephants.

"The right perception towards domesticated and wild animals is the key to clearer understanding on this much-debated issue," Ms Pirhonen said.

She said tourists who are interested in activities with elephants should care more about their welfare and not encourage them to do circus tricks.