Thailand's stock market suffered the biggest equity sell-off in Asia-Pacific for the third time in less than a month, with total market capitalisation down 3.25 trillion baht year-to-date, as the coronavirus crisis and crashing oil prices delivered a double whammy. 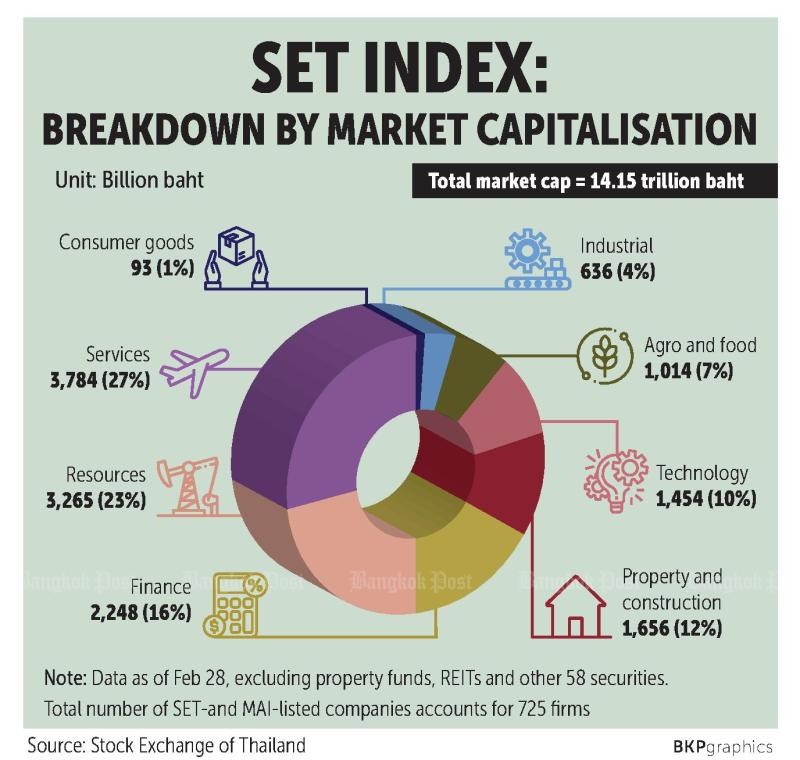 On Feb 24 and 26, the SET index suffered the biggest drop among Asian bourses as confidence was hampered by rising coronavirus cases outside of China.

Share prices of companies under the umbrella of national oil and gas conglomerate PTT Plc saw steep losses of more than 20% from Friday's close, with PTT's oil and gas drilling arm, PTT Exploration and Production Plc, down the most at 29.8%.

Oil was the primary reason for the sea of red among equity indices worldwide. Panic selling was sparked by a plunge in crude oil prices.

Friday's meeting of Opec left a sour note and exacerbated oil's plunge as member countries failed to finalise a deal to continue restraining their output.

Russia refused to go along with efforts to rescue the oil market by cutting production, while Saudi Arabia escalated the situation further over the weekend, slashing export prices by US$6-$8 a barrel in a bid to retake market share and heap pressure on Russia, CNN reported.

The turmoil sent the Brent crude price down 28% to $32 a barrel, putting it on track for the worst day since 1991, according to Refinitiv.

"We think a global crude price war is likely to begin in order to pull Russia back to the negotiation table or fight back against Saudi Arabia, the lowest-cost producer," said Kaweewit Thawilwithayanon, an analyst at KGI Securities.

Gold continued to rally, breaking $1,700 per ounce during yesterday-morning trading before dropping to $1,679 after investors took profits.

A sharp fall in energy share prices bodes poorly for the SET index, as a substantial portion of the bourse's equity weighting is made up of energy shares.

Energy shares are clustered in the resources sector by the SET. The sector's market cap stood at 3.26 trillion baht, making up 23% of the bourse's total market cap of 14 trillion baht.

Besides the resources segment, steep losses in the services and financial segment are also liable for the bourse's predicament, as they make up 27% and 16% of total market cap, respectively.

SET president Pakorn Peetathawatchai said the bourse has measures up its sleeve to look after the domestic stock market in case of panic selling, but they cannot be disclosed publicly.

"Panic selling and forced selling have pulled down the SET index sharply, but the bourse has not found any irregular trading from programme trading or block trades," Mr Pakorn said.

The SET used a circuit breaker three times in the past as a measure to handle high-volatility trade.

The first was in 2006 when the Bank of Thailand temporarily imposed capital controls. The second and third times occurred on Oct 10 and 27 during the 2008 subprime crisis.

There are two stages for using a circuit breaker. The first occurs if the SET index falls by 10% from the previous day's close. All trading in listed securities will be halted for 30 minutes.

The second stage occurs if the index falls by 20%, or another 10%, from the previous day's close. Trading in all listed securities will be halted for one hour.