Media ad spending is expected to fall by 4.4% to 117 billion baht this year, the first ever decline, weighed down by the coronavirus outbreak and economic slump, says the Media Agency Association of Thailand (MAAT). 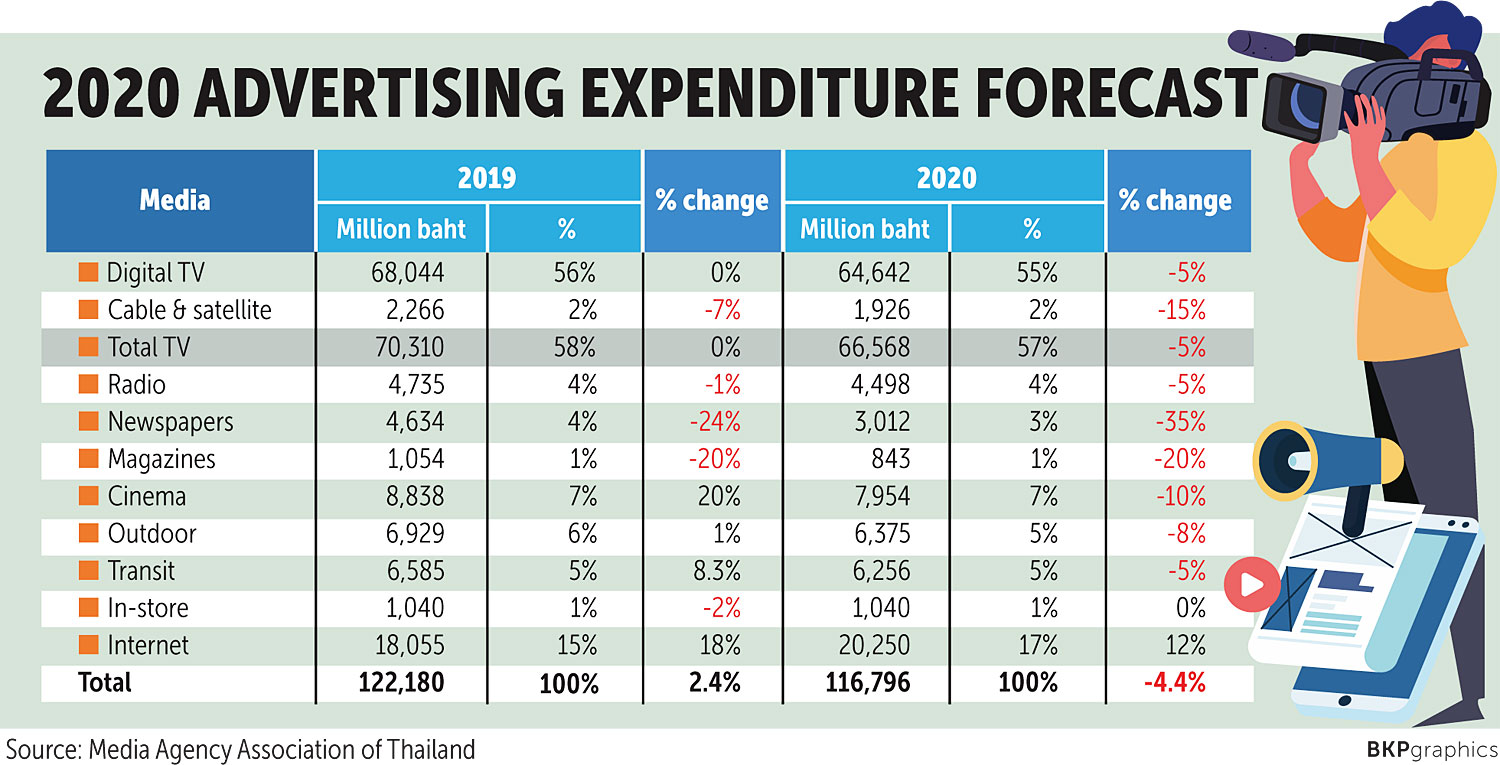 In the first quarter, marketing spending is expected to fall by 10-30%.

"This might be the worst year for the local ad industry as the macro impact from the epidemic is taking a toll on retail and tourism spending," said Triluj Navamarat, president of MAAT.

MAAT earlier predicted ad spending could grow by 2-3% this year, but that was before the outbreak. In the first quarter, ad spending is expected to drop 10%.

But some brands, troubled by disruption of their imports from China, South Korea and Japan, could reduce their spending by 20-30%.

Following the outbreak, MAAT cut its digital spending growth outlook for automotive, food and beverage, and banking sectors by 260 million baht, 200 million and 71 million, respectively. It upgraded spending from insurance firms by 18 million baht as they offer Covid-19 insurance packages.

He said digital is expected to be the only media that sees growth in ad spending this year.

The biggest drop in ad spending would be for newspapers (-35%), followed by magazines (-20%), he said. The 5G roll-out could aggravate the problem as 5G may spark digital media consumption.

"If the 2020 Olympic Games are not held or delayed due to the outbreak, the market will worsen," said Mr Rattakorn.

Kanaporn Hutcheson, chief executive of GREYnJ United, an ad agency, said it is difficult to predict when the coronavirus would be contained and to what extent it would affect media agencies.

She said the company's customers have not cancelled their projects over the past two months, but chose to delay them. They are managing budgets more carefully, maximising them, said Ms Kanaporn.

With the outbreak, sectors that could receive a boost include domestic travel, food delivery, digital lending and mobile banking.

Thipayachand Hasdin, chief operating officer of GREYnJ, said the company is gearing towards digital or mobile commerce, social listening, media buying and public relations measurement this year, instead of focusing on strategic planning or content stories like in the past.

"In a crisis, strong and outstanding brands will survive as consumers are not engaged in emotional purchases," she said. "Brand-building continues to be important, but it must be balanced to create sales opportunities."