An investor checks stock prices at a securities firm in Sathon as the Stock index of Thailand drops on March 13, 2020. (Photo by Pornprom Satrabhaya)

The government is considering setting up a stabiliser fund to support the battered stock market after a circuit breaker was triggered for the first time since 2008, with investors seeking refuge by holding on to cash.

The Finance Ministry, the Stock Exchange of Thailand (SET) and the Bank of Thailand have been asked to devise an initiative to manage heightening volatility and stabilise market conditions following a series of heavy sell-offs on Thailand's bourse, said Deputy Prime Minister Somkid Jatusripitak.

The Vayupak Fund was established 17 years ago by the Finance Ministry to stabilise stock market conditions, but the Thai bourse has since outgrown the fund, said Mr Somkid.

A new stabiliser fund must, therefore, be "sizeable" to accommodate the size of the domestic equity market, he said.

"There is no way a fund could sufficiently stabilise our stock market [due to large market size], but it would help reduce the impact from investors' panic-selling and keep investors from overreacting," said Mr Somkid. 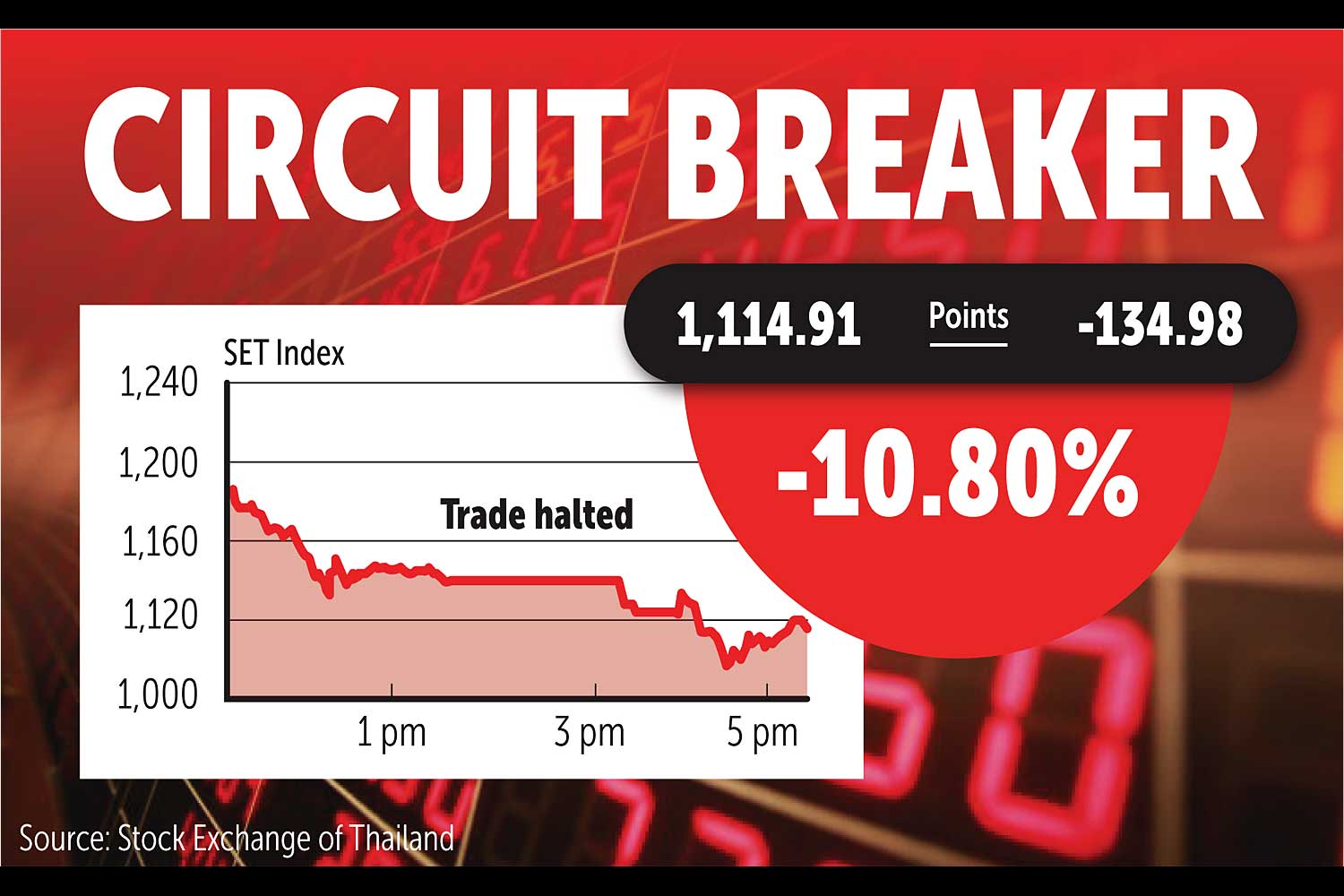 A circuit breaker was triggered after Thailand's stock market fell by 10% on Thursday afternoon, the fourth time in history the emergency measure has been used to curb excessive volatility.

The mechanism was used after the SET index fell by 125.05 points to 1,124.84 points after the afternoon trading session resumed for around 30 minutes.

The SET used a circuit breaker three times in the past as a measure to handle high-volatility trade.

The first time was in 2006 when the Bank of Thailand temporarily imposed capital controls. The second and third times occurred on Oct 10 and 27 during the 2008 sub-prime crisis.

Two events can trigger a circuit breaker. The first is if the SET index falls by 10% from the previous day's close, for which all trading in listed securities will be halted for 30 minutes.

The second trigger is the index falling by 20% from the previous day's close, an additional 10% from the first trigger, upon which trading will be halted for one hour.

After the second trigger, the SET will continue matching orders until market close, with no more halts.

SET president Pakorn Peetathawatchai said the bourse does not plan to lower the first stage trigger for the circuit breaker to 7% from the existing 10%.

The SET has launched a relief package for stakeholders battling the coronavirus outbreak, offering a 20% waiver of annual fees and depository fees as well as fee reduction for futures and derivative warrant transactions.

On Thursday share prices continued to nosedive worldwide after the World Health Organization declared a global pandemic and the US banned the entry of travellers from mainland Europe.

An escalation in the oil price war could further derail investor confidence as the United Arab Emirates, Opec's third largest producer, said it was positioned to boost supply to 4 million barrels per day (bpd), according to oilprice.com.

Investors, meanwhile, rushed to offload their holdings of equities, bonds and bullion worldwide as asset prices dwindled on the back of net outflows.

Thai bonds saw non-resident net outflows worth 14.8 billion baht on Thursday, with 11.3 billion attributed to a sell-off in short-term debt securities. The 10-year government bond yield climbed by 0.21% to 1.18%.

While gold prices on Thursday dipped below US$1,640 per ounce, prices remain on an upward trajectory amid the pandemic, but price corrections could occur occasionally, said Tanarat Pasawongse, chief executive at Hua Seng Heng Group of Companies.