If approved, CP Group's Tesco Asia purchase will have far-reaching effects on suppliers and consumers

From every-corner convenience stores and agricultural seeds to invisible wireless networks and a planned high-speed train, the business empire of Charoen Pokphand (CP) Group seems to extend beyond the sky's limit, with no holds barred for its amplifying size.

With the conglomerate triumphing over other bidders for control of UK-based Tesco's Asia business in a deal worth US$10.6 billion, CP Group's grip on controlling major stakes in Thailand's business landscape seems firmer, ushering in an awe-inspiring and terrifying sense at the same time.

Included in the deal are 200 Tesco Lotus hypermarkets and 1,600 Tesco Lotus Express convenience stores in Thailand and 74 outlets in Malaysia, Reuters reported.

The deal will also be a test for Thailand's anti-trust authority, the Office of Trade Competition Commission (OTCC), as to whether the acquisition would be considered a monopoly, given that CP already owns 7-Eleven convenience stores and the Makro cash-and-carry business.

Under the 2017 law, proposed mergers that could lead to market dominance or a monopoly must be reviewed by the OTCC. Dominance is defined as having a market share of over 50%, or 75% when combined with two peers.

But after the baht collapsed in July 1997 and triggered a wider financial crisis in Southeast Asia and beyond, the group sold 75% of Lotus to Tesco the following year, Nikkei Asian Review reported. The rest was sold in 2003.

"It [Tesco Lotus] is actually my child," Mr Dhanin said during an interview with local media. "I am buying it back with a belief that I can raise this child better with new techniques and technologies." 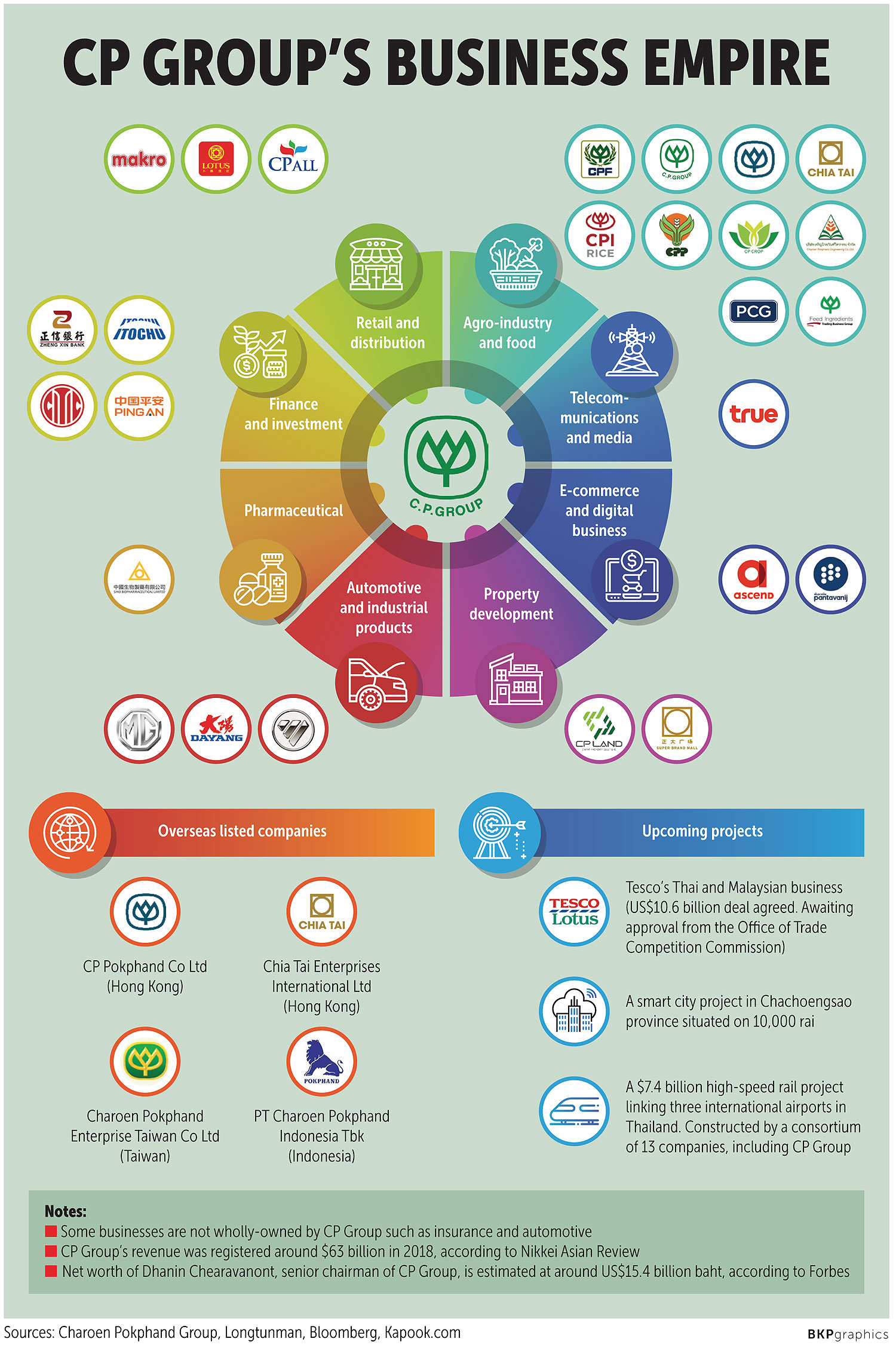 The Tesco deal should be a wake-up call for the government to look at the pressing issue of "economic rent" and the control of large capitalists or business tycoons, who dominate the market and hold excessive market share, giving them an advantage in competition, bargaining power and product price control, at the cost of the market.

In the past, the government has always promoted capitalists in their investments, said a high-ranking academic official.

In the case of Tesco's Asia business takeover by CP Group, the deal is unlikely to lead to a monopoly, since there is still competition for each business. It is only that the takeover will increase CP's bargaining power and control over the market.

As the conglomerate spreads its wings in the market, suppliers are likely to be under more pressure as they remain compelled to sell to CP because of Tesco's high market share, even though margin is low. As a result, consumers will have to pay more out of their pockets as goods become more expensive, the official said.

The problem in Thailand is that tycoons have power in the country and use connections and money to gain income from the lower class, whether in property or the retail sector.

"As a consequence, the rich become richer and the poor continue to remain poor," the official said.

The problem is compounded by fast-growing wealth at the top among Thai billionaires and the hollowing out of the middle class due to slow-growing wages and high household debt.

A few families control half of the economy in Thailand, and their power is overwhelming in terms of control of product retail prices and competition, the official said. 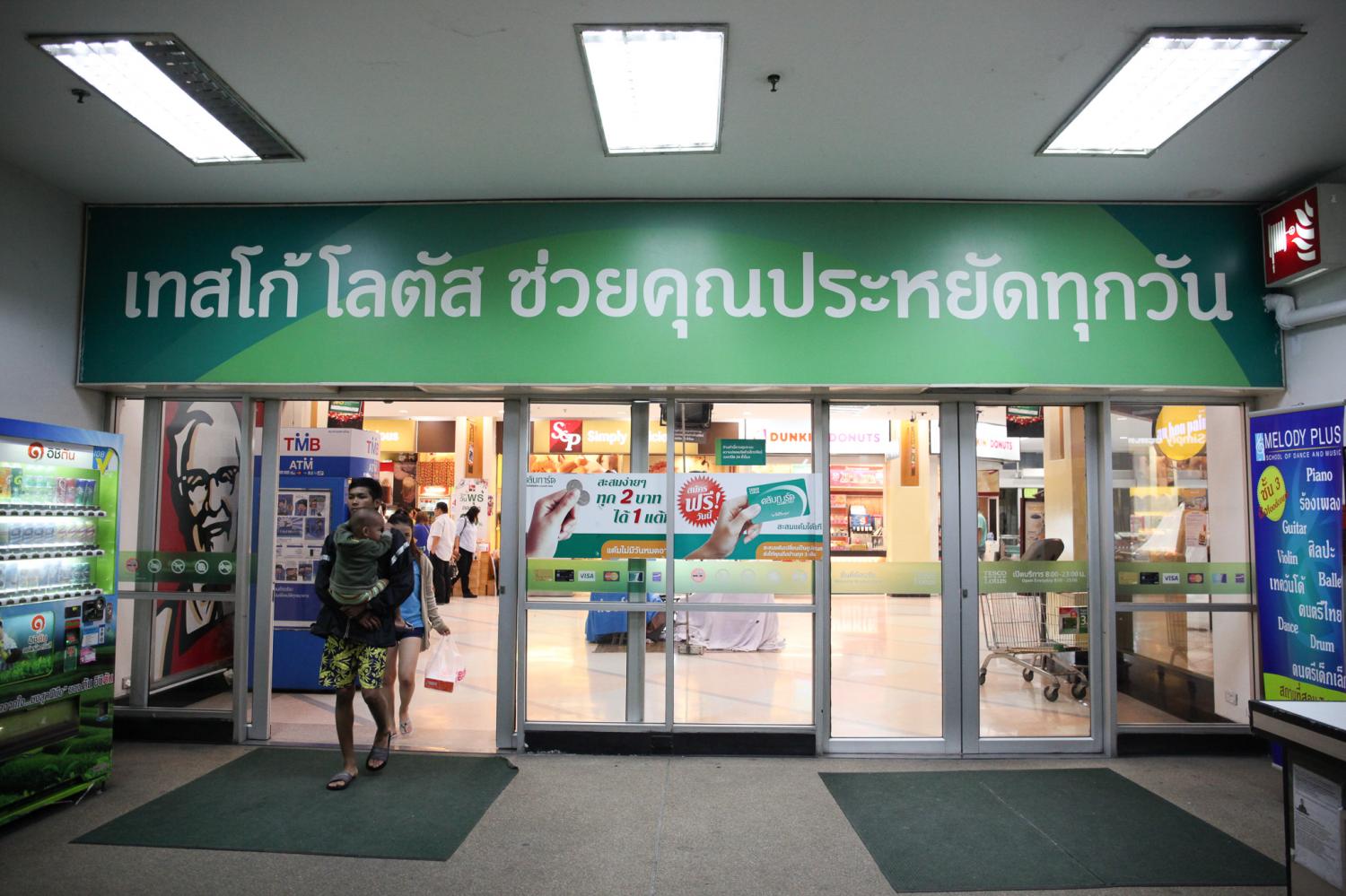 According to Pavida Pananond, an associate professor in the Department of International Business, Logistics and Transport at Thammasat University, suppliers are likely to bear the brunt of CP Group's consolidation of the retail market.

"I think it is unlikely CP would raise prices considerably on consumers, but would be more likely to seek rent from its suppliers that have no choice but to sell to CP," Assoc Prof Pavida said. "It would be difficult to increase prices for consumers because CP still faces stiff competition from Big C and other discount stores, where the uniqueness of the experience is the low price."

As CP controls the whole vertical supply chain, for instance in shrimp and chicken, this makes it hard for any business to compete. Its broad horizontal integration means that any food product supplier in the country has virtually no choice but to sell to CP, regardless of the margins.

CP All, a CP Group subsidiary that operates all 7-Eleven stores in Thailand, caused a social media uproar in 2015 after it came out with a similar product to the Tokyo Banana snack, drawing accusations that it was bullying smaller brands.

Assoc Prof Pavida expects the Tesco acquisition deal to become the first test for the newly independent OTCC, to see if the organisation is up to the task of taking on large corporate interests in Thailand. Previously, the office was part of the Commerce Ministry and susceptible to political pressure.

"This deal could have important consequences for Thailand's business environment and foreign direct investment," she said. "We are now seeing large companies like CP and ThaiBev controlling many of the industries, and as this is perceived to be normal practice for business in Thailand, it could undermine competition for foreign firms considering investing in the country."

"It is possible that the OTCC will approve the deal if the commission assesses there is a distinction between retail and wholesale businesses," said Kitipong Urapeepatanapong, chairman of Baker & McKenzie's Bangkok office.

Mr Kitipong points to the case of the Siam Makro acquisition by CP All in 2003. An anti-trust allegation was shot down based on the rationale that the two businesses operated in a different landscape. 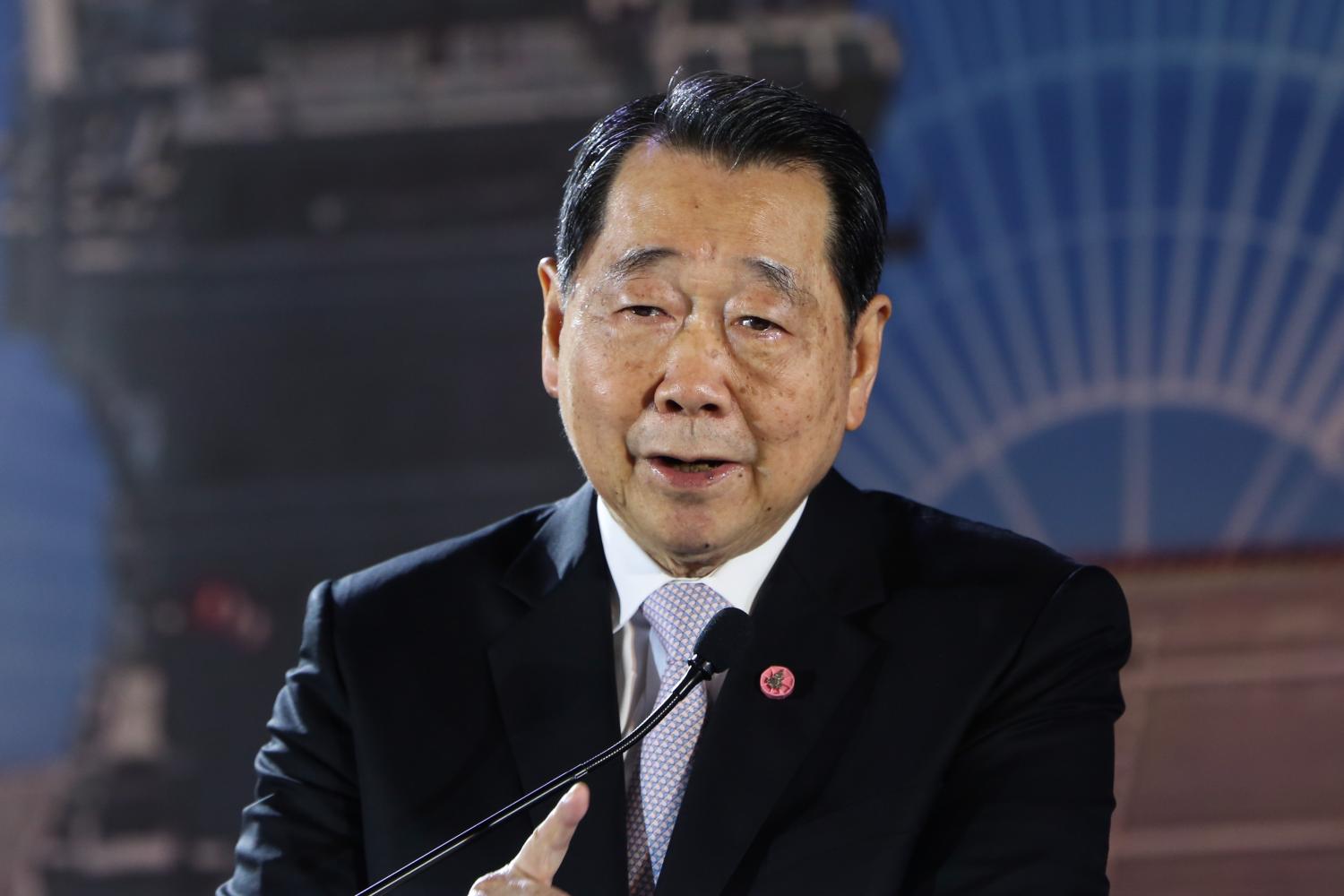 Ranked in the top spot in the Forbes Thailand Rich list with $29.5 billion in 2019, the Chearavanont family is perceived as one of the powerful clans with massive financial power -- but at the expense of the social fabric, particularly in terms of inequality.

"The gap between the rich and the poor will expand," Mr Somjai said. "Every Thai government is the same. They have not been able to resist the financial power of big businesses and have even established comfortable ties with them."

Governments have also failed time after time to set up a law to prevent major conglomerates from stepping into the territory of local small businesses, he said.

The Gini Coefficient index, a universally accepted standard that is also used by the World Bank to measure inequality among countries worldwide -- focusing on two key factors, income and expenditure -- is an indicator reflecting Thailand's widening social inequality.

A higher Gini index indicates greater inequality, with high-income individuals receiving a much larger percentage of the total income of the population.

Thailand also dethroned Russia and India as the most unequal country, according to the findings of the Credit Suisse Global Wealth Databook 2018 conducted on 40 countries.

Getting control of Tesco Lotus superstores in Thailand can also help CP Land Plc, a property arm of CP Group, boost the potential of vacant land near Tesco Lotus branches in major provinces.

One of the highlighted land plots is a 30-rai piece in South Pattaya, located close to Tesco Lotus South Pattaya on Sukhumvit Road.

"With CP Group's clinching of the Tesco bid, this plot will have higher potential because it is located behind that Tesco branch, which is on the main road," said a source close to CP Land. "Then the group's property development plan in Pattaya to capitalise on its high-speed train project will become even more attractive."

Besides the South Pattaya plot, CP Land has two other large plots of vacant land close to Tesco Lotus for future development, including over 60 rai in Nakhon Si Thammarat and 20 rai in Khon Kaen.

Both plots are also next door to CP Land's hotel and office tower in those provinces. In Khon Kaen, the firm also has a convention and exhibition centre.

CP Land, which was founded in 1988, started with the development of office building CP Tower 1 on Silom Road, then branched out to provinces in 1997, starting with Khon Kaen as the first destination.

"Buying a large plot of land in provinces and dividing some parts for property development, such as retail, office, hotel and residence, can complement one another and boost the value of the plot," the source said.

For example, after the group acquired land plots of over 60 rai on Mitraphab Road in Muang district of Khon Kaen, Tesco Lotus developed Tesco Lotus Khonkaen and CP Group erected an office building, CP Tower Khon Kaen 1, on that plot in 1998.

The key man behind successful land purchases and property development in Khon Kaen was Sunthorn Arunanondchai, chief executive of CP Land and vice-chairman of CP Group. He also created the joint venture between CP Group and Tesco in 1998.

"Mr Sunthorn is a key man who sought and bought land plots in potential locations with good prices for Tesco Lotus branches in provinces," the source said. "If possible, getting a large land plot is the best deal."

Mr Sunthorn, who has some stakes in CP Land, once said that the development of offices, hotels or condos in provinces could reduce the group's costs, as its middle- to upper-level staff working for Tesco Lotus and 7-Eleven nationwide could rent or buy condos under CP Land's development.

When staff or executives from headquarters have business trips in provinces, they can stay at the hotels or use the office towers for business meetings. 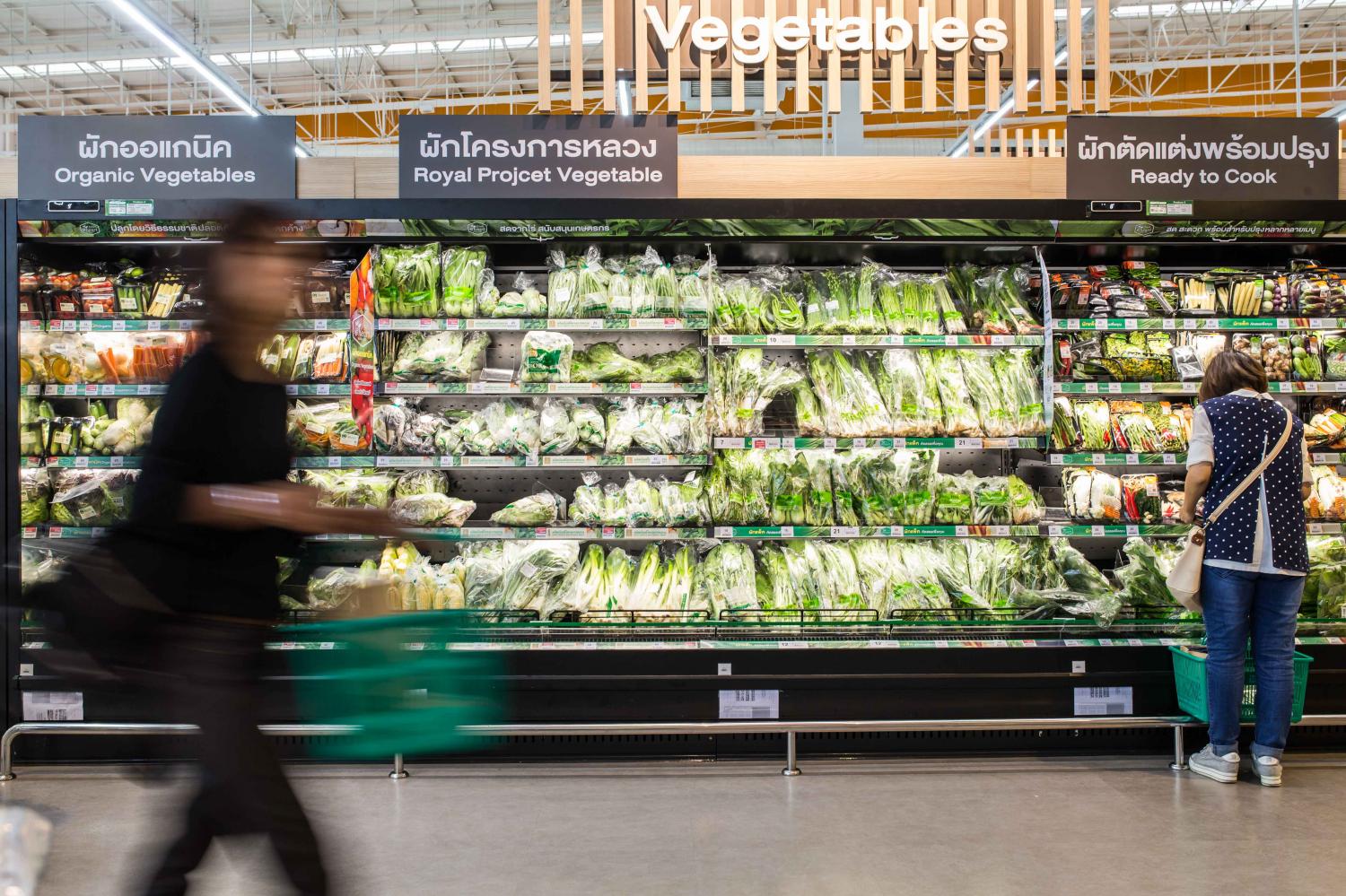 A top executive at a leading oral care manufacturer, speaking on condition of anonymity, said CP Group's perceived market dominance is not such a concern, as long as the executive's company continues working with both 7-Eleven and Makro, which are professionally run and work separately.

"I don't expect much problem as long as they are run professionally and separately," the executive said. "But the problem may transpire if CP Group pools its purchases for the entire retail units."

Another source from a household goods manufacturer said that after Tesco operations are under CP Group's umbrella, all suppliers expect more difficulties in doing business.

This source still hopes that the Commerce Ministry will enforce the Trade Competition Act seriously to protect suppliers and consumers.

Meanwhile, a source from a major consumer goods firm said that the deal, once completed, will enthrone CP Group as the dominant force in the retail market.

This is because the group's retail businesses cover not just convenience stores, but also supermarkets, hypermarkets and wholesalers.

"Anything can happen once CP takes control of all distribution channels," the source said. "The group will gain much more bargaining power over suppliers.

"This business deal should not happen from the outset, as consumers may not have any alternatives. If it [CP Group] pressures me to make a higher profit, the additional cost will certainly pass on to customers."