This year's dry season started early and is showing a tendency to be harsher and last longer than usual. The warning signs were already present in late 2019 as the volume of water stored in reservoirs across the country started to decline before the end of the rainy season.

A total of 1.62 million rai of agricultural land was damaged by drought between September 2019 and February 2020, according to the Agricultural Disaster Monitoring and Resolution Centre at the Agriculture and Cooperatives Ministry. Of the total, 1.44 million rai, or 89%, was dedicated to rice production. The remaining land was for field crops and horticulture.

Water stored in dams in all regions is below the five-year average and even lower than in 2014 when the most severe drought in 10 years occurred. But the region most seriously affected has been the central region. The Meteorological Department has forecast the drought could persist until June.

Siam Commercial Bank's Economic Intelligence Center (EIC) has evaluated the magnitude of the drought's impact on Thailand's key agricultural outputs: rice, sugar cane, cassava, rubber and oil palm. Growers of these five strategic crops account for 97% of all farm households in the country.

A preliminary assessment shows that drought will seriously affect production of off-season rice, sugar cane and cassava, which are primarily planted in the northern, northeastern and central regions. Off-season rice has been planted since late 2019, whereas sugar cane and cassava can be planted throughout the year. The output of such crops will be high and concentrated between January and June.

Sugar cane: Sugar cane farming has been affected by drought since late 2019, causing the volume of cane harvested in the 2019-20 crushing season to contract considerably.

EIC estimates in a worst-case scenario, cane supply could drop by as much as 25 million tonnes or 27% of all cane for crushing. In such a scenario, total cane supply will fall to about 75 million tonnes, representing a 43% decline from 132 million in the 2018-19 crushing season.

Reduced supply will cause mills to end the crushing season in March, compared to April in most years. If the dry season lasts until June, mills may also face cane shortages during the next production season. 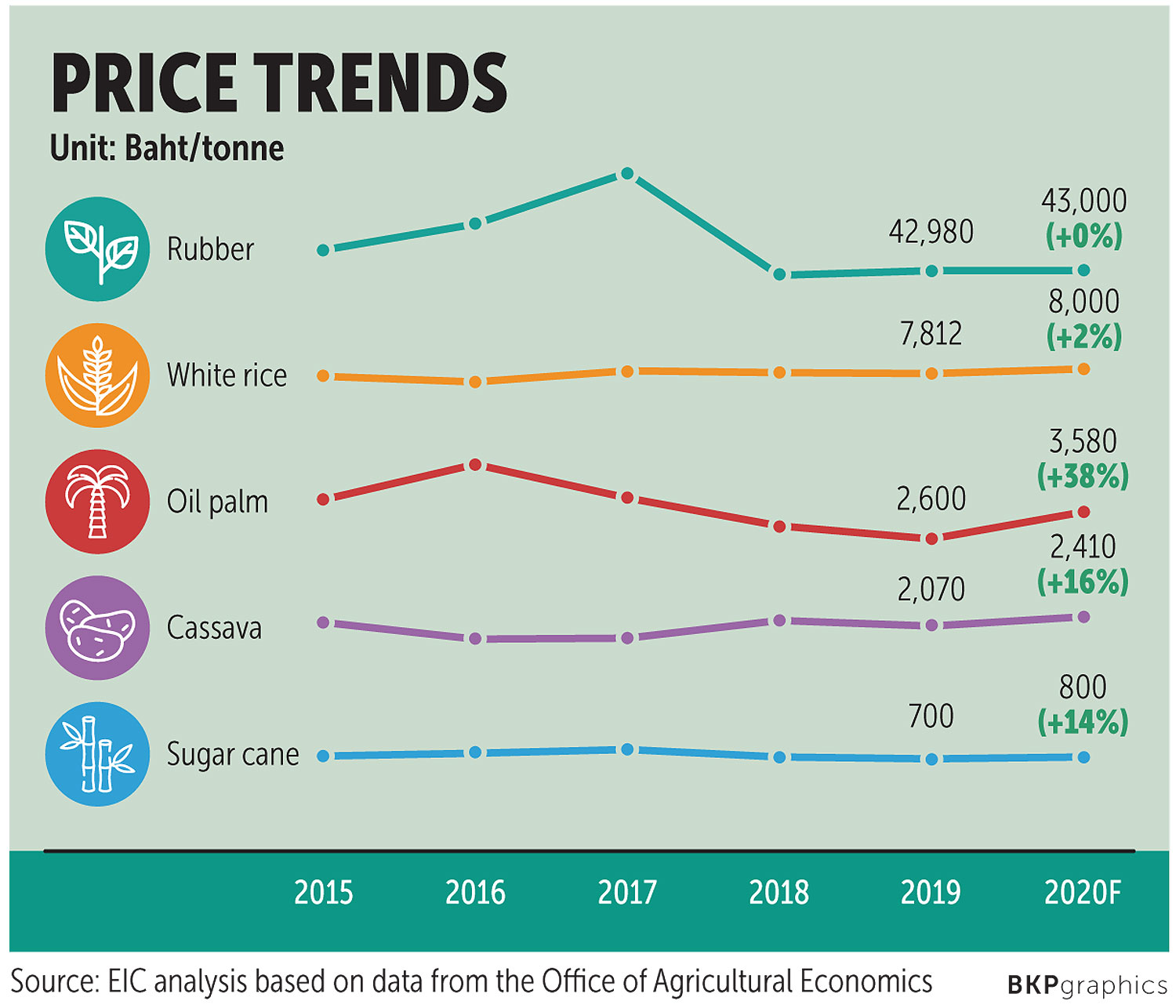 In the worst-case scenario, reduced off-season rice production could lower total rice output for the 2019-20 harvesting season to between 28 million and 29 million tonnes, from 32-33 million tonnes normally.

Cassava: Similarly, drought has damaged cassava output. Even though 57% of total cassava production comes from the northeastern region, the crop has been less affected by drought than others due to its drought-tolerant physiology.

EIC estimates in a worst-case scenario, cassava production in 2020 could drop by 1.8 million tonnes, or 7% of total cassava output.

Lower output of sugar cane, rice and cassava will push up crop prices. The price of sugar cane will also be pushed up by global supply shortages, so the final sugar cane price should be about 800 baht a tonne, compared to the preliminary price of 750 baht.

The price of white rice is likely to be around 8,000 baht a tonne, 2% higher than in 2019. However, waning domestic production may not translate to a significant price upturn as competition in the world rice market is fierce and world rice stocks are increasing.

The price of cassava in 2020 is forecast to rise to 2.40 baht per kilogramme, from 2 baht in 2019. Furthermore, the cassava mosaic disease outbreak in Thailand, Vietnam and Cambodia is causing global cassava supplies to drop.

The number of farming households that cultivate rice, sugar cane and cassava represent 72% of all farm households in Thailand. An income decline could affect businesses that rely on farmers' purchasing power, from everyday consumer products and motorcycles to agricultural inputs, such as agricultural machinery, seeds, fertilisers and pesticides.

On the other hand, the income of rubber and oil palm farmers should improve in 2020 thanks to higher supply. But rubber growers will still be challenged by weak world prices. Meanwhile, oil palm growers will benefit from higher prices as the government has introduced B10 biodiesel as the primary diesel fuel and has been phasing out B7 and B20 since January 2020.

Income insurance programmes in 2019 for rice, cassava, rubber and oil palm increased farmers' incomes by about 1-2% from what they would have been without the programme, which is expected to provide similar support this year.

However, EIC believes the programme will not be as effective in 2020. This is because the prices of most agricultural products will increase, except for rubber. Furthermore, the quantity of output entering the programme might not be as high due to drought. As such, the government might need to consider other measures.

For short-term mitigation, the government could encourage farmers to modify agricultural practices according to changing water conditions. In the longer term, sustainable water management is needed to resolve lingering structural problems.

In the past, most drought mitigation measures were focused on encouraging farmers to reduce cultivation of water-intensive crops such as off-season rice, or providing compensation for drought-affected farmers. However, in the short term, the government could take additional measures, such as knowledge transfer on cultivation, farming inputs and technology to encourage farmers to modify practices in light of reduced water availability.

The government should also urge farmers to bring more agricultural output into the crop insurance programme to help support their incomes.

The government could also urge farmers to plan crop cultivation appropriately, for example, grow crops that require less water in areas that repeatedly suffer from drought, promote crops with high value-added and support farmers to shift to cultivate crops as planned.

Kanyarat Kanjanavisut is a senior analyst and Pattarawadee Rattanasiwakoon is an analyst with the Economic Intelligence Center (EIC) of Siam Commercial Bank. EIC Online: www.scbeic.com

The government is ready to repatriate film director Ramai "Danny" Moriphan, who was kidnapped in Myanmar over his alleged links to a drug trafficking syndicate