When Anucha Meekiatichaikun, a Thailand-born, Paris-trained entrepreneur, returned to his homeland to set up a high-tech dental device business, he looked beyond the bright lights of Bangkok to the historic walled city of Chiang Mai.

It proved to be a profitable decision. In Chiang Mai, an ancient center of arts and culture, Mr. Anucha found craftsmen with skills passed down over centuries who quickly adapted to the intricacies of making digital titanium implant bars and other prosthetic devices.

The business, Hexa Ceram Dental Laboratory, thrived, attracting investment from Curaeos, a pan-European dentistry platform with one million customers. Today, it employs 800 people and exports to the European Union, Japan, the U.S. and Thailand’s regional neighbors. “Chiang Mai has the skilled workforce, international airport and everything you need for your personal life,” Mr. Anucha says.

In one sense, Mr. Anucha’s experience is no different from that of other Thailand investors. Southeast Asia’s second largest economy has long been among the developing world’s most welcoming destinations for international companies, accumulating more than $222 billion in foreign direct investment, according to United Nations data. One favored location: the Eastern Economic Corridor, a booming area near Bangkok that Thailand wants to make the innovation hub of Asia.

Where Mr. Anucha’s investment stands out is his decision to seize opportunities offered by Thailand’s many diverse regional investment hubs. Chiang Mai and cities such as Khon Kaen and Songkhla are vibrant provincial capitals offering well-respected universities, innovation-focused science parks and increasing connectivity to nearby international markets such as China, Cambodia, Laos, Myanmar and Vietnam.

Foreign enterprises that have already discovered the advantages of regional Thailand range from long-established multinationals to the new breed of so-called “digital nomads” – foreign online entrepreneurs who leverage Thailand’s fast internet and lower overheads to start international businesses while working in one of the world’s most beautiful environments.

Indeed, the NomaList website ranks Chiang Mai in the top 10 out of more than 800 nomad-friendly cities worldwide, scoring it highly for internet speed, cost of living and safety. “Costs here are very low,” says California-born Nati Sang, a former Silicon Valley systems engineer who now runs the Chiang Mai Makerspace, a venue for nomads and local startups to develop innovative products ranging from air quality sensors to luxury chocolates. “Also, this is a very chilled place that naturally makes you happy. People are more creative when they are happy.”

Creativity is also a feature of the Northern Science Park. Linked to Chiang Mai University, which is ranked among the world’s top 650 by UK-based QS University Rankings, the park seeks to be a Southeast Asian leader in business innovation, incubating startups and acting as a research resource for established small and medium sized enterprises.

Some 700 km north of Bangkok, yet barely 1 hour away by plane, Chiang Mai has proved equally welcoming to larger companies. East West Seed, a technology-focused agribusiness founded in The Netherlands and now spanning 60 countries has made its global research and development headquarters there. “We are not selling seeds, we are selling know-how,” says East West Seed’s Vice President for R&D, Simon Jan de Hoop, who works closely on research projects with another local public university, Maejo. “When it comes to research, we have found that Thailand is very good at public-private partnerships.” 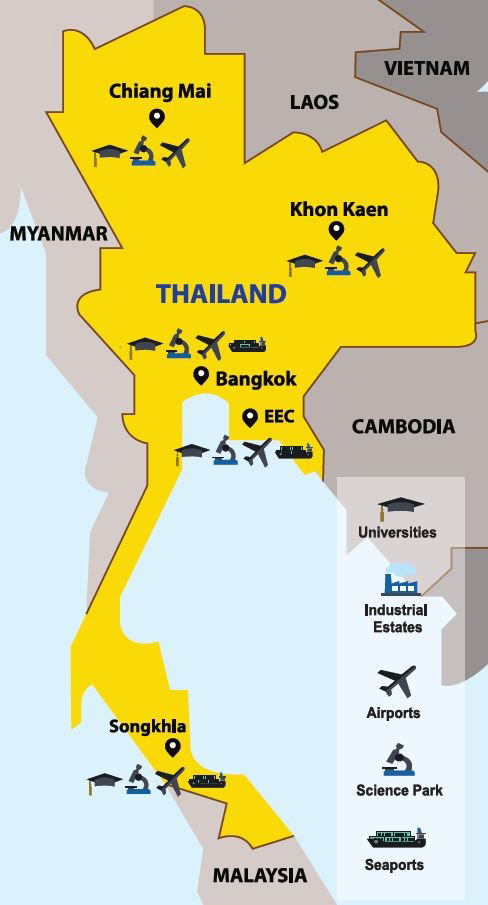 THAILAND: Opportunities abound in all directions

Rivaling Chiang Mai in terms of opportunity is Khon Kaen. Located 450 km northeast of Bangkok in what was once one of the country’s least developed regions, bustling Khon Kaen now finds itself at the forefront of Thailand’s infrastructure and digital ambitions.

As of now, Khon Kaen’s sole rail connection is a slow line from Bangkok that terminates at the border with Laos. Soon, it will be on the route of a new high-speed rail corridor connecting Thailand (and indeed Malaysia and Singapore) with China.

Driven by local entrepreneurs and academics, Khon Kaen is on its way to becoming the first genuinely smart city in regional Thailand, with 74 recognized projects using the Internet of Things to provide sustainable urban services. The most ambitious is a $500 million, 23-km light rail system. Construction is due to start next year, with completion set for 2022.

Among the private sector backers of Khon Kaen’s ambitions is Cho Thavee, a manufacturer of smart vehicles and manager of transport systems that is itself a testament to the city’s entrepreneurial flare.

Headed by Chief Executive Officer Suradech Taweesaengsakulthai, Cho Thavee makes products ranging from naval patrol boats to specialist high-lift catering vehicles used in airports to load planes with food. About half its revenue comes from exports to countries such as Japan, Korea and Australia. Yet despite that international success, Mr. Suradech chooses to keep his home base in Khon Kaen.

Songkhla is 1,000 km south of Bangkok, but less than 80 km from Malaysia, Southeast Asia’s third biggest economy. It boasts an international airport and proximity to the rail line that will eventually connect Thailand, Malaysia and Singapore with China and Europe.

Thailand is the world’s largest rubber producer and Songkhla is a base for industry giants Michelin, Malaysia’s Top Glove and Thailand’s Sri Trang.

Songkhla is also a seafood processing center. Thai Union Frozen Products, the world’s largest tuna canner which owns Chicken of the Sea and John West brands, has a manufacturing base there, as has Chotiwat Manufacturing Co.

In the past 50 years, Thailand has progressed from an agricultural to a sophisticated industrial society. Now, under a program known as Thailand 4.0, it aims to become a leader in the digital economy.

Much has already been achieved. Bangkok is one of Southeast Asia’s great commercial centers. The Eastern Economic Corridor is evolving into the region’s digital hub. But in a country geographically larger than Germany and Japan, there is still space and opportunity aplenty for the Thailand 4.0 vision to diversify in exciting new directions.