Myanamar nationals cross through the Three Pagodas pass checkpoint to Sangkhla Buri district in Kanchanaburi on Friday before it closes starting from Saturday. (Photo by Piyarach Chongcharoen)

The Interior Ministry has ordered most border provinces to leave only one international checkpoint open as the country tries to block arrivals to contain the coronavirus outbreak that has caused a sharp jump in cases this week.

Checkpoints with Malaysia were already closed for all intents and purposes after the Malaysian government locked down the country for two weeks from last Monday. Malaysia has reported 900 Covid-19 cases, the most in Southeast Asia.

Interior Minister Anupong Paojinda on Friday ordered governors of border provinces to consider closing all temporary passes and keeping only one main checkpoint in each province open. The exception will be Chiang Rai as it borders on Myanmar and Laos and will be allowed to maintain one checkpoint for each country.

Gen Anupong has given the governors full authority to seal off their provinces by shutting all checkpoints if they consider the Covid-19 situation has worsened in their areas.

All Thais will be strictly banned from crossing the borders to neighbouring countries, according to the ministry (story continues below). 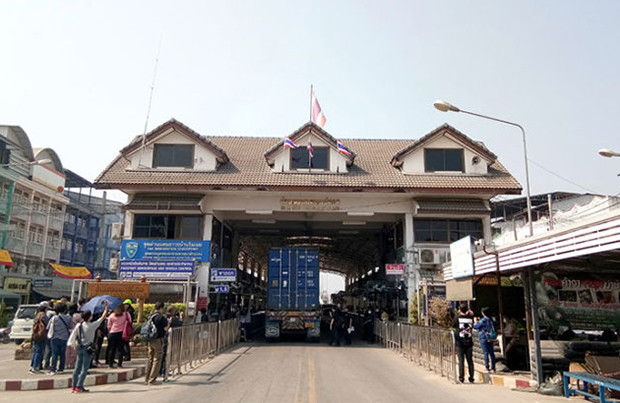 The first Thai-Myanmar Friendship Bridge in Mae Sot district of Tak will be closed from Saturday until further notice. (Photo by Assawin Pinitwong)

Tak governor Anrasit Samphanrat on Friday ordered the border closure at the first Thai-Myanmar Friendship Bridge from Saturday. The bridge is the main gateway between Thailand and Myanmar on roads that lead to Yangon.

The second Thai-Myanmar Friendship Bridge across the Moei River in Mae Sot district, which opened last October, will be the province’s only checkpoint open to travellers.

Kanchanaburi governor Jirakiat Phumsawad ordered the suspension of the Phu Nam Ron permanent checkpoint in Muang district and the Three Pagodas crossing in Sangkhla Buri from Saturday to April 3.

Phu Nam Ron is a main crossing on the route to Dawei in Myanmar. The Three Pagodas pass connects Sangkhla Buri and Payathonsu in Myanmar.

Only the Aranyaprathet checkpoint will remain open to connect the country with Cambodia.

Mukdahan on Friday halted ferry service across the Mekong River to Savannakhet province in Laos until April 20, according to the Thai News Agency of the Public Relations Department.

The country has already imposed a de facto ban on most international flights, by issuing regulations that are deliberately bewildering and almost impossible for a normal traveller to fulfill. They include a requirement for a medical certificate stating that the person is free of Covid-19.

Banks strike back at cybercriminals