Asia's economic rise and growth in urbanisation has created affordability problems in housing and healthcare, along with other challenges.

Over the past two decades, Asia's growth story has caught the world's attention as the region has become bigger, richer and more connected. But this remarkable development has come with some unwelcome by-products for many people.

It starts with a direct impact on the finances and lifestyle of the region's people. The cost of living in Asian cities continues to rise dramatically as urbanisation increases. According to the 2019 Global Talent Trends report by the human resources consultancy Mercer, eight of the world's 10 most expensive cities are located in Asia.

The report is based on the comparative cost of more than 200 items from 209 cities across five continents. The basket covers housing, transport, food, clothing, household goods and entertainment. While the focus of the survey is mainly on goods and services consumed by expat employees -- one of Mercer's main services is advising businesses on compensation packages -- the implications for local residents are clear.

Hong Kong remains the most expensive city to live and work in worldwide because of sky-high prices in its housing market. The ongoing political protests and economic impact from Covid-19 may put some pressure on property prices, but rents are still highly unaffordable for many people.

The annual International Housing Affordability 2020 Survey by Demographia, which divides median house prices by gross annual median household income, assigned a world-leading ratio of 20.8 to Hong Kong. How bad is that? A reading of 3.0 is considered affordable and anything above 5.1 is considered "severely unaffordable".

Tokyo, Seoul and Shanghai also have a housing affordability problem but nowhere near as great as in Hong Kong. And in Singapore, where housing prices are a national obsession, the ratio arrived at by Demographia is a modest 4.6. 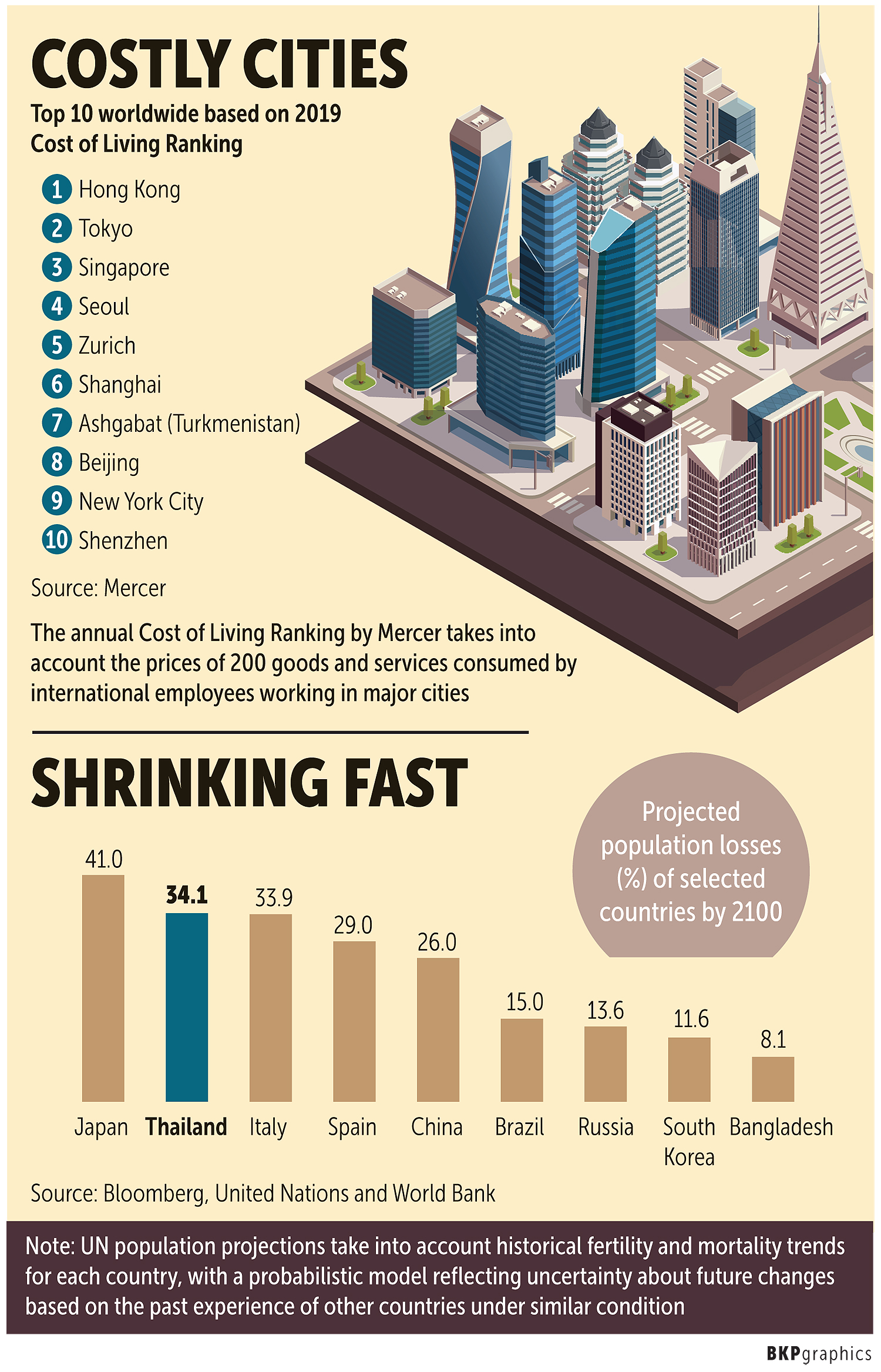 According to a report by Julius Baer, the Switzerland-based private bank, one of the main reasons behind the rising cost of living in Asia has been the emergence of vast numbers of newly wealthy Asians over the past decade, particularly Chinese buyers.

The rising number of Chinese buyers creates high demand that can pressure housing prices across the region; in other words, these investors are playing a big role n contributing to housing inflation.

This is also the case in Southeast Asian countries, including Thailand, where Chinese have become by far the largest foreign buyer group in the Bangkok condominium market. The coronavirus, of course, has brought a halt to their activity at the moment but the market will probably pick up sometime in the next year.

It is also evident that Chinese companies have significantly reduced foreign direct investment into the US and Europe as they have a greater variety of good options on their doorstep.

Key cities in Thailand and the Philippines have been receiving great attention from investors due to attractive valuations, but this has led to rising prices which make properties less affordable for local residents.

Vietnam and Malaysia are expected to become top investment choices of Chinese buyers. The former is becoming a major manufacturing hub in Southeast Asia, and the latter is witnessing positive results from its "Malaysia My Second Home" programme as the number of foreign real estate buyers continues to rise. 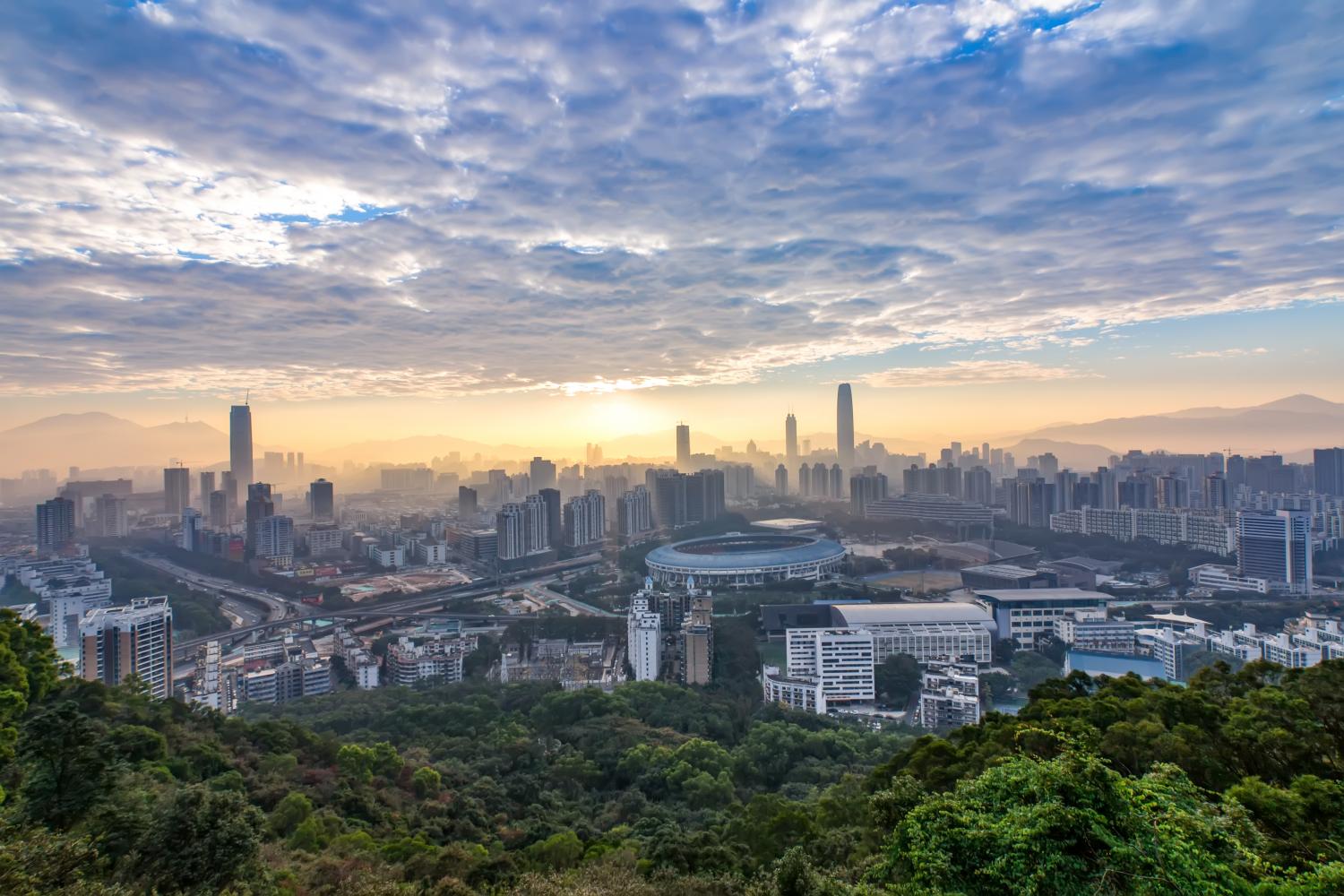 Apart from the skyrocketing price of real estate, medical and healthcare costs are increasing significantly in Asia. This reflects a number of factors, including the emergence of a large middle class that is willing to spend more for healthcare and insurance, and the emergence of more private hospitals to serve them.

According to the 2019 Medical Trends Around the World report by Mercer Marsh Benefits, medical costs in Asia have been rising by more than 10% per year on average, outpacing general inflation by about four times. The annual survey looked at information of more than 200 healthcare insurers across 59 countries.

In Malaysia, healthcare inflation has been running at around 13%, with a figure of 12% in the Philippines and around 9% in China. Among the reasons are the ageing population as well as the loosening of familial bonds in the region.

According to an analysis by the Organisation for Economic Cooperation and Development (OECD), as emerging countries become richer, their spending on healthcare increases significantly, especially in the long-term care category.

Urbanisation forces people to move out of their homes and live in cities in order to capitalise on their career opportunities. As a result, relatively fewer families are keeping aged members in their homes and instead having to rely more on long-term care facilities.

Growing affluence in Asia has also has led to lifestyle and diet changes and a rise in non-communicable diseases usually associated with more developed countries. These include diabetes, cancer, chronic respiratory disease and cardiovascular disease. The cost of protecting against and treating these conditions has pushed up insurance premiums by up to four times. This makes the affordability and viability of health insurance a problem. 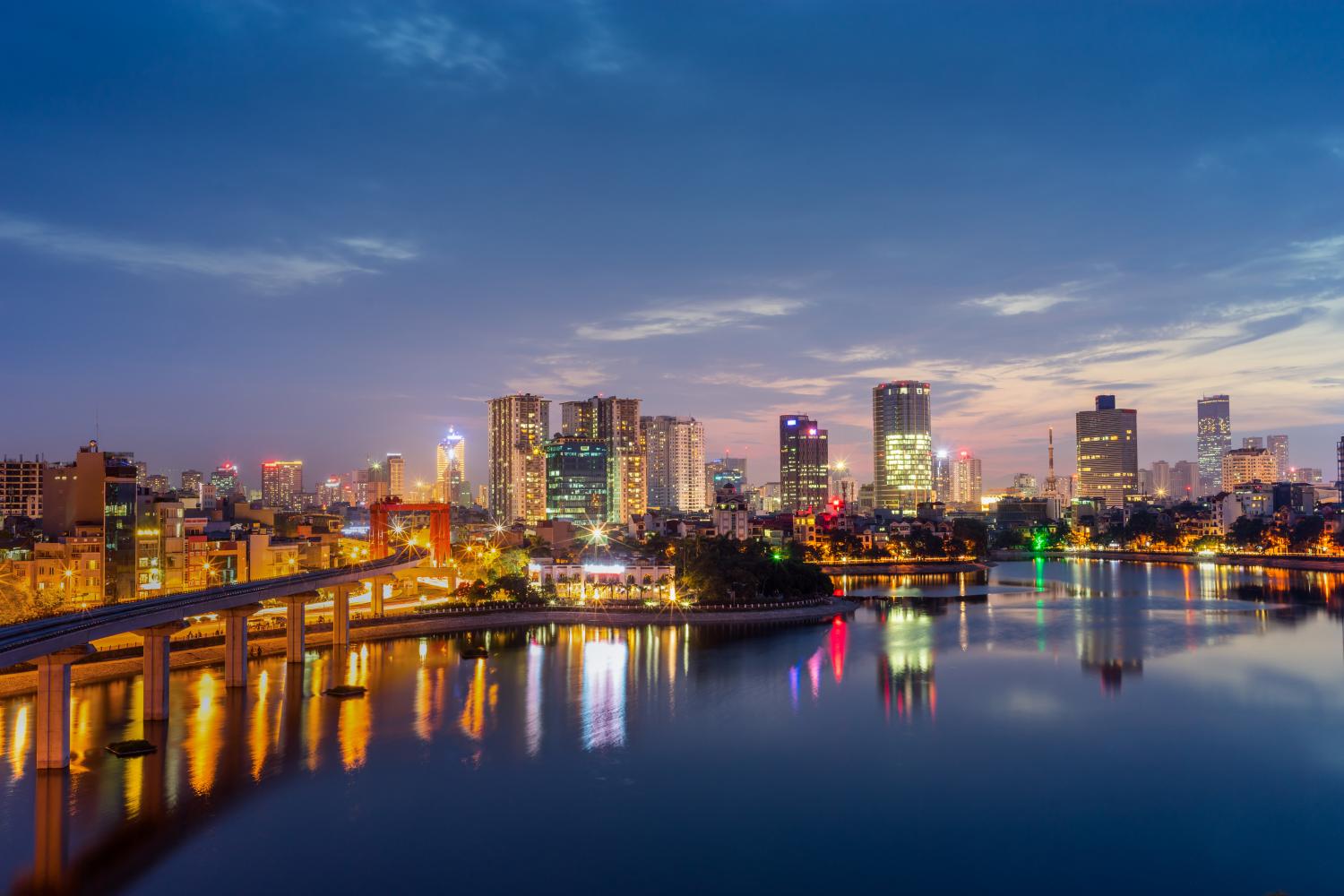 Hanoi draw rich and poor by the millions.

No discussion of the downside of economic growth and urbanisation is complete without noting the rising level of pollution. According to a global report on annual air pollution levels by the Beijing-based monitoring firm AirVisual, 99 out of the 100 most polluted cities in the world in 2019 were in Asia. More than half were in India and China, followed by Pakistan and Bangladesh.

In Southeast Asia, Jakarta, Hanoi and Bangkok are also grappling with the serious impacts caused by unhealthy air. Despite governments' various efforts to combat toxic air pollution, the situation is likely to persist as the difficulties in balancing economic growth with improvements to the environment cannot be resolved simply.

The problem comes from several sources, including power plants, industries, heavy traffic, road vehicles with poor maintenance, annual crop burning as well as the use of fossil fuels for domestic cooking.

This is one area where the remarkable growth story of Asia has come at a huge cost, with foul air a serious threat to human health, leading to long-term illness such as pneumonia particularly among infants and young children. The World Health Organization (WHO) has estimated that at least 7 million people were killed from breathing polluted air every year.

Raising a child has never been cheap, but the cost of living in urban Asia is causing many families to debate whether to have children at all. Birthrates are plunging in Japan, South Korea, China, Hong Kong and Singapore, as well as in Thailand.

Low fertility rates, now below replacement levels in many countries, have become a key demographic challenge. As societies age, the number of young working people will not be sufficient to financially support the rising number of elderly.

Japan and South Korea also recorded record-low fertility rates last year. Japan's ministry of Health, Labor and Welfare found that the number of births for 2019 stood at only 864,000, down 54,000 from the previous year.

In 2019 alone, the country suffered an annual population decline of 512,000. Meanwhile in South Korea, the birthrate has been trending downward for over 40 consecutive months and this is expected to continue.

In Thailand, data published by the United Nations in 2019 showed births dropping to a level on par with Switzerland and Finland, two ultra-wealthy countries with which it has almost nothing else in common. This statistic suggested that more than a quarter of Thai population will be over 60 by 2030.

The remarkable growth of the region has led to a certain degree to the creation of affordability crisis, particularly in urban areas. The high stress levels that people have about the high cost of living, rising prices of property and medical care are affecting couples' willingness to have children. These social side effects of economic growth require greater attention from all. 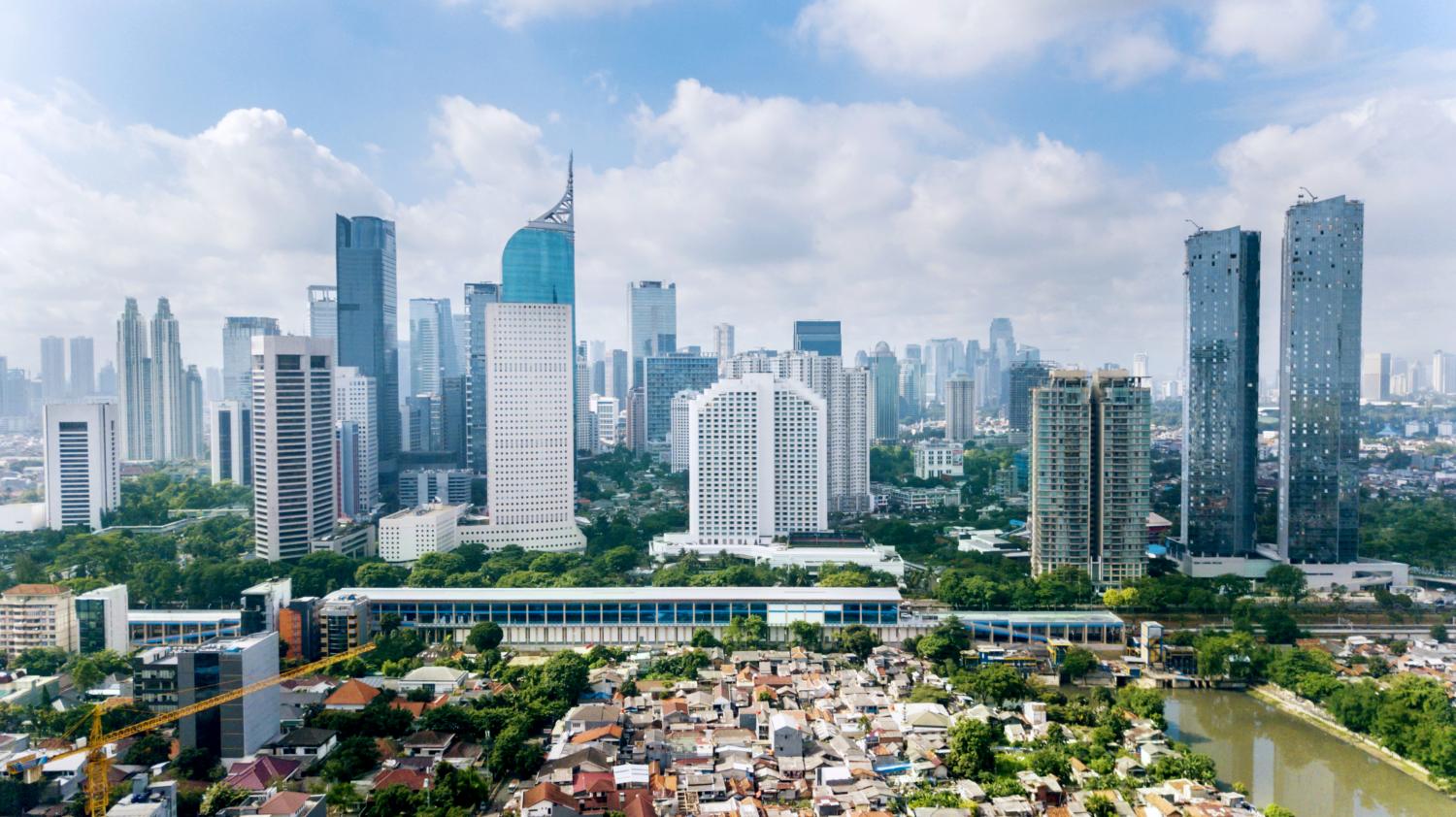 Asian megacities such as Jakarta