Move to maintain stability of system

The Bank of Thailand has expanded the scope of a special credit facility to provide liquidity to mutual funds by allowing banks to repurchase all money market and daily fixed-income funds, but the central bank will repurchase only underlying assets that meet its requirements.

The central bank charges banks an interest rate based on the policy rate minus 50 basis points for repurchase transactions, governor Veerathai Santiprabhob said.

The Mutual Fund Liquidity Facility was announced by the central bank and related regulators on Sunday after some mutual fund companies ceased the redemption process for fixed-income funds following a sell-off triggered by growing concerns over the Covid-19 outbreak.

According to the previous requirement, commercial banks were allowed to purchase investment units in high-quality money market funds or daily fixed-income funds affected by ailing market liquidity and use the underlying unit trust as collateral for liquidity support from the central bank.

The special liquidity facility is aimed at maintaining stability of the financial system amid the tightened liquidity in the debt instrument market and unusual financial market conditions.

Apart from the liquidity facility scheme, a consortium led by the Thai Bankers' Association has agreed to set up a 70-100 billion baht Corporate Bond Stabilisation Fund (CBSF) for investment in high-quality, newly issued bonds by corporations that cannot fully rollover maturing corporate bonds. 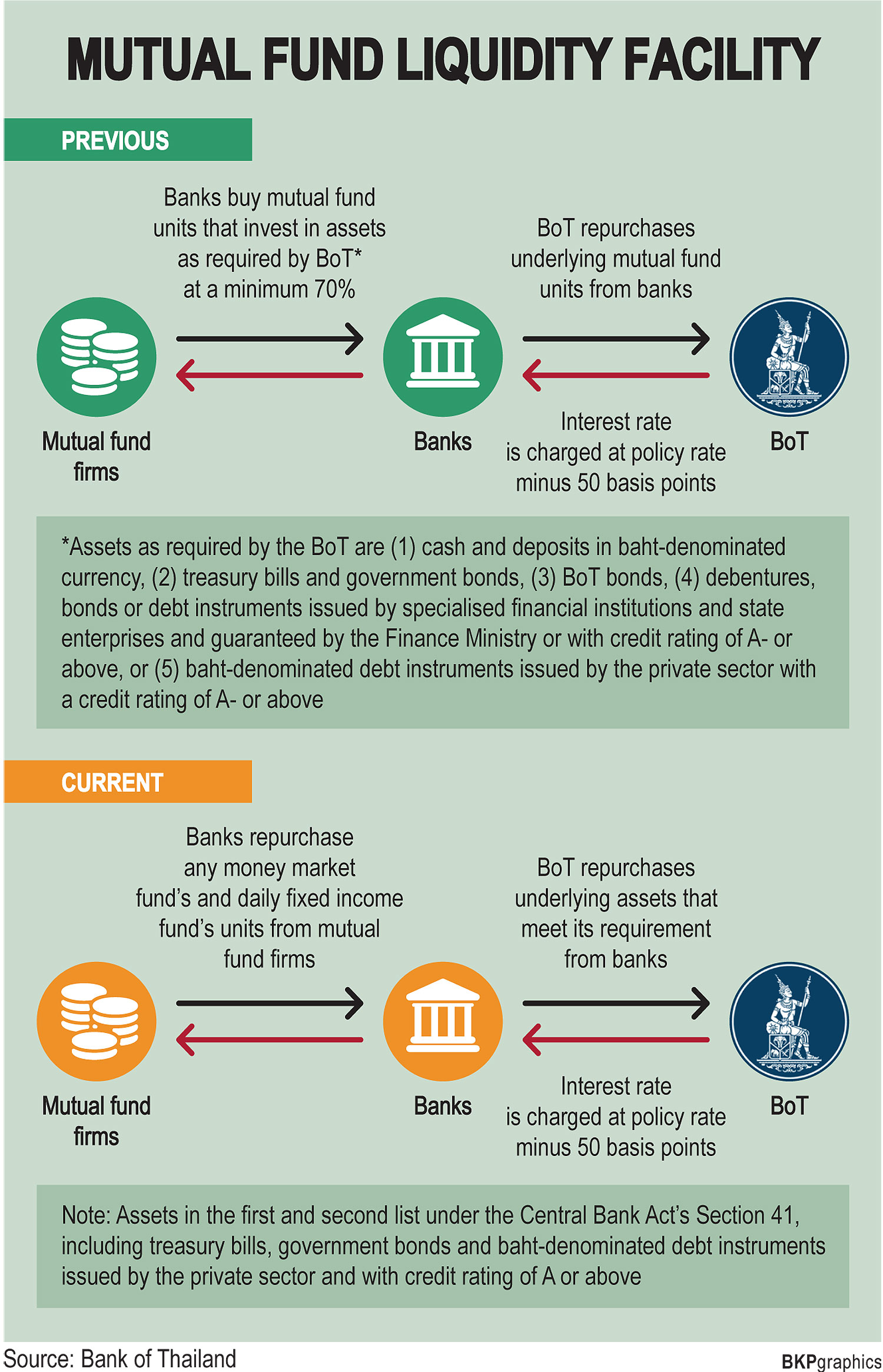 Mr Veerathai said the central bank is ready to consider additional measures to ensure effective financial market functions and build up confidence for participants in the market's ability for businesses to mobilise funding.

The recent redemption run on a fixed-income fund is a specific case and its effect has not spilled over to other funds, he said.

"There is no need for the bank to receive additional liquidity support from the central bank under the bond repurchase measure as both the bank and our asset management company have sufficient liquidity amid abundant liquidity of the local banking system," said Mr Aphinant.

The bank's mutual fund unit still allows unitholders to redeem all funds as normal, he said.

The Securities and Exchange Commission (SEC) has relaxed a regulation for asset management companies to borrow money or conduct sales transactions with repurchase agreements for fixed-income funds and mutual funds investing mainly in debt securities.

Transactions have expanded to at least 30% of net asset value, from the previous stipulation of 10%, and are effective until April 30.